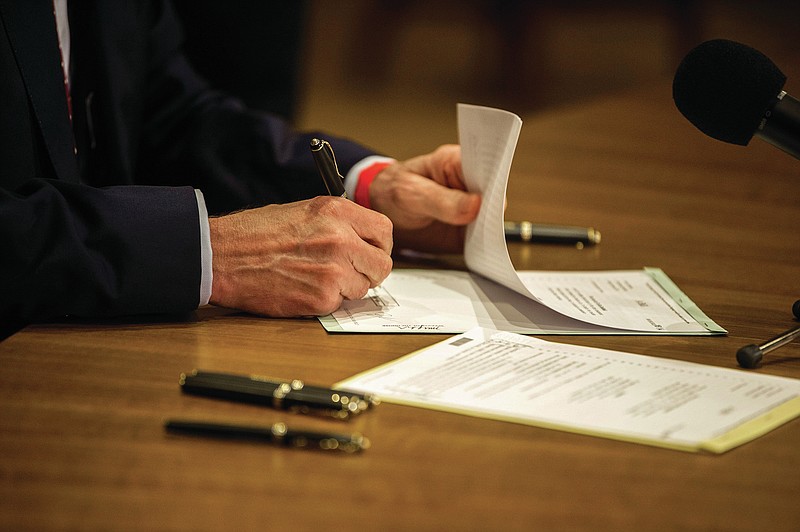 According to legislative records, Senate Bill 622 became Act 681 on Wednesday, two days after it received a final vote of approval in the House. A spokeswoman confirmed the governor signed the bill.

In a statement released by his office Monday, Hutchinson thanked House Speaker Matthew Shepherd, R-El Dorado, and Senate President Pro Tempore Jimmy Hickey, R-Texarkana, for ushering the bill through the Legislature. Praising its drafting, he said SB622 was "a stronger version of hate crime legislation than many states have."

Still, the governor addressed criticisms leveled against the bill by many longtime activists, who said that it's broadly tailed language failed to specifically name minority and LGBT groups that have been frequent targets of hate crimes.

Classifications such as race, sexuality, sex and gender identity were not mentioned in SB622, which will instead allow prosecutors to seek longer prison terms for violent criminals who target anyone in a "recognizable and identifiable group."

The bill would require defendants convicted of such a crime to serve 80% of their sentences before being eligible for parole.

"While I supported a more specific version of a hate crime bill, SB 622 will provide greater penalties for anyone who targets someone because of their race, sexual orientation or gender identity," the governor said. "The protection provided and the increased penalties are the ultimate test, and while I preferred different language, I am confident that this bill accomplishes the objective of increased penalties for hate crimes."

The earlier legislation supported by the governor, Senate Bill 3, was sponsored by his nephew, Sen. Jim Hendren of Sulphur Springs. That bill never made it out of committee. Hendren left the Republican Party to become an independent during the session.

"I do believe it's progress," Hendren said Wednesday of the later effort becoming law. "It's not nearly as much progress as many of us had hoped for."

Heading into the session in January, Arkansas was one of three states that did not provide for tougher penalties for hate crimes. The other two states, South Carolina and Wyoming, are considering their own versions of a hate-crimes bill.

Critics of SB622 attempted to distance the measure from laws in other states that provide more specific and enumerated protections.

The Anti-Defamation League, which tracks hate crimes, said it would continue to list Arkansas as lacking such a law, while the Human Rights Campaign released a statement after the House sent the bill to the governor, calling it an "unenforceable sham."

The bill's sponsors used the label "class protection bill" to refer to the measure.

Judy Shepard, the mother of Matthew Shepard, a Wyoming college student who was beaten to death in 1998 in what prosecutors described as a crime motivated by anti-gay sentiment, released a statement through the Human Rights Campaign this week condemning SB622.

"Arkansas's so-called 'hate crimes' bill is an insult to the very idea of hate crimes legislation," Shepard said. "Rather than protecting against hate crimes, this bill will only encourage them by enforcing no real consequences for hate, violence, and acts of discrimination."

The legislation also had attracted opposition from the Arkansas Family Council and some conservative Republicans, who likened it to past efforts to enact a hate -rimes law in Arkansas.

The bill faced a close vote in the House Judiciary Committee last week, with members of both parties voting no and then calling for a roll-call vote after Chairwoman Carol Dalby, R-Texarkana, ruled in favor of the bill. Dalby, who was also a sponsor of the bill, then gaveled the committee into adjournment, thus preventing a roll call.

That decision sparked a protest from Rep. Brandt Smith, R-Jonesboro, the committee vice chairman who said a "cloud" hung over the committee.

Shepherd upheld the ruling and the House later voted to affirm the decision.

Hendren, the sponsor of the earlier hate crimes bill, said he hoped the existence of the protections under now-Act 681 would make it easier for future lawmakers to draft amendments to cover specific groups and expand it to include other felony and misdemeanor offenses.

The Arkansas Crime Information Center will now be required to collect data about crimes prosecuted under the law, and Hendren said that information should provide insight to lawmakers.

"It's very likely there will be more attempts to define who is covered," Hendren said.