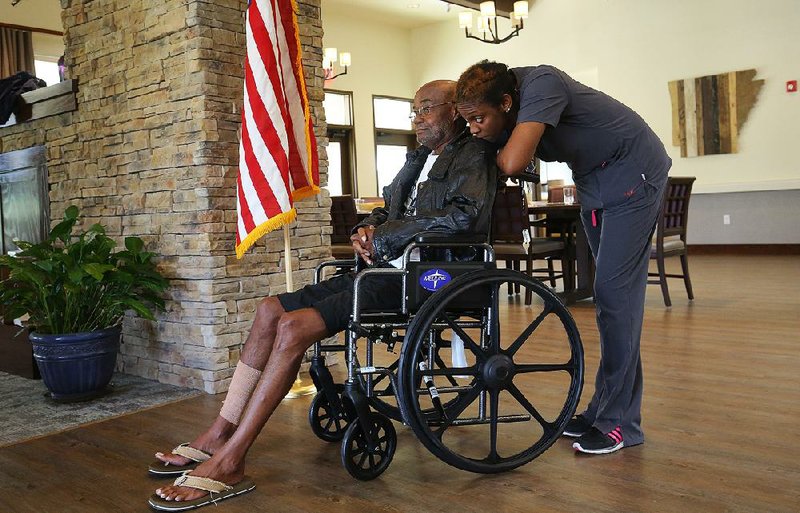 Nursing assistant Katrina Allison rests her head on the shoulder of resident Sammy Johnson as they wait to get his blood pressure checked before dinner in a cottage at the new Arkansas State Veterans Home in North Little Rock on Wednesday.

Both chambers of the General Assembly have approved legislation that would introduce the most significant changes to the state's minimum nursing home standards in decades.

It’s now headed to Gov. Asa Hutchinson who, in a statement provided by his spokeswoman, said he will sign the bill into law.

What does the new bill propose?

• Replace state law that mandates specific nurse-to-resident ratios on a per-shift basis with a requirement that nursing homes average 3.36 "direct care hours per resident day" over a one-month period

Why do supporters of the bill want these changes?

The bill’s supporters have said the classification of medication assistants and therapists as "direct care staff" matches federal regulations.

"The old staffing ratios/shifts are unique to Arkansas and were created over 20 years ago – before extensive federal staffing requirements and elaborate, transparent and audited federally mandated data reporting," said Executive Director Rachel Bunch, of the Arkansas Health Care Association. "Flexibility with staffing in a changing workforce will ultimately benefit our residents."

What do those who oppose the bill have to say?

Residents' advocates who oppose the bill said staffing levels are the most important measure to determine quality of care at nursing homes.

"My opinion is there will be more neglect and abuse and less accountability for the nursing homes,” said Martha Deaver, president of Arkansas Advocates for Nursing Home Residents.

Herb Sanderson, director of AARP Arkansas, said he believes nursing homes will be able to count what is now "administrative and managerial work" as direct resident care, which he said would "dilute" the care residents receive.

The executive director of a New York-based nonprofit focused on federal staffing regulations said the bill's stated purpose -- to align with existing federal rules the bill describes as "highly proscriptive" -- is flawed.

See who voted for the bill in the House and the Senate, and read more about the legislation from reporter Eric Besson.