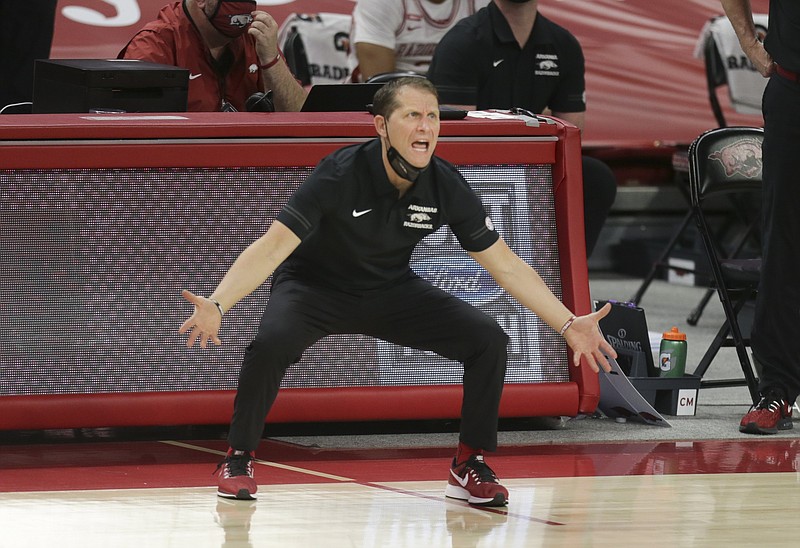 Arkansas head coach Eric Musselman reacts during the second half of a Feb. 27 game at Bud Walton Arena in Fayetteville. - Photo by Charlie Kaijo of NWA Democrat-Gazette

FAYETTEVILLE -- Eric Musselman had a top-10 basketball team at the University of Arkansas this season.

Now Musselman has a top-10 salary, too.

The new deal moves Musselman up to tied for eighth nationally based on scheduled pay for active coaches in USA Today's salary database, and third in the Southeastern Conference behind Kentucky's John Calipari ($8,095,800) and Tennessee's Rick Barnes ($4,707,500).

Musselman's previous annual salary of $2.5 million -- $2,333,333 this year with a reduction because of the coronavirus pandemic -- ranked 49th nationally and 13th among the 13 SEC coaches at public universities.

Musselman, 56, led Arkansas to a 25-7 record last season and its first NCAA Tournament Elite Eight appearance since 1995. The Razorbacks also finished second in the SEC behind Alabama with a 13-4 record and were ranked No. 10 in the final Associated Press poll -- also last done in 1995 -- that was released before the NCAA Tournament.

"Certainly I think everybody wants to feel appreciated, and I felt much appreciated before this contract got done," Musselman said. "My family and I are more than happy and grateful, but we did feel that way prior to this."

If Musselman remains the Arkansas coach through April 30, 2026, he will receive a one-time retention bonus of $1.5 million.

"I think that shows the level of trust between Coach Musselman and myself, and my belief that this is the place that he wants to be," Yurachek said of the buyout dropping by $5.5 million after one year.

The contract includes an amusing clause that Musselman will not owe any buyout if he becomes coach at the University of San Diego -- where he played on the basketball team from 1983-87 -- after April 2024.

Musselman said the clause was a nod to his alma mater and part of a bet he made with his San Diego teammates with whom he continues to stay in touch.

"I've got to be honest, I'm on a group thread, there's nine of us that all played together," Musselman said. "They're going to be really happy when they see that (clause), because no one thought that I would actually ask Hunter to put it in there.

"So there's a lot of burritos owed to me when I go back for a three- or four-day vacation in San Diego.

"I don't think the University of San Diego is going to be competing with the Arkansas Razorbacks."

Yurachek smiled when asked about the clause.

"As Coach Musselman continues to age, if he wants to go and finish his career at the University of San Diego, who am I to keep him from that opportunity?" Yurachek said.

If Musselman is fired for convenience during the life of the contract, Arkansas will owe him 70% of his remaining salary.

It's hard to envision a scenario in which Musselman -- who has a 165-53 record in six seasons at Nevada and Arkansas, and with four NCAA Tournament appearances since 2017 -- would be fired by Yurachek.

"It's my goal as the director of athletics that Eric Musselman is our basketball coach for as long as he wants to be," Yurachek said.

"I trusted Eric when he told me this was the place he wanted to be," Yurachek said. "I think we've got to give our men's basketball team a little bit of credit than to think that all of those schools (that had openings) are better basketball jobs than we have here at the University of Arkansas with the fan base that we have, the recruiting base that we have.

"I wasn't necessarily worried about many of those jobs, to be honest with you, because I think what we have here is really special, and I think Coach Musselman realizes that as well."

Musselman was asked how many schools reached out to his agent, Jordan Bazant, to gauge whether he would have interest in their open jobs.

"There were maybe some calls, but nothing that was anything more than that," Musselman said. "It was really about how do Hunter and I come to an agreement that everybody feels comfortable with."

Musselman said he and his family love being at Arkansas and that he has built a strong relationship with Yurachek.

"Just being able to have a communication line like I do with Hunter is more than valuable.

"In a very, very short time, we've made a lot of friends, too, outside of the athletic department that make it a really comfortable place for my wife and daughter."

"We've had a really tough year financially as many schools across our country have had because we had reduced capacity," Yurachek said in reference to the pandemic. "Our budget is down about $35 million in revenue.

"So about during the middle of February, I started touching base with our donors that I know had specific interest in our men's basketball program and had a liking for Eric. And I said, 'Hey, I may be calling on you as we get to the end of the season because I may need help getting to take care of Coach Musselman in a way we're going to need to take care of him to pay him.'

"We started formulating that plan, myself and the Razorback Foundation. It continued to grow a little bit each time we won in the NCAA Tournament, and that's the cost of success, and I'll take that any time."

Musselman said he and Yurachek took a deliberate approach to discussing a new contract because first the focus was on winning NCAA Tournament games, then on recruiting players in the transfer portal.

"Then once we thought we had our roster stabilized, an agreement got done."