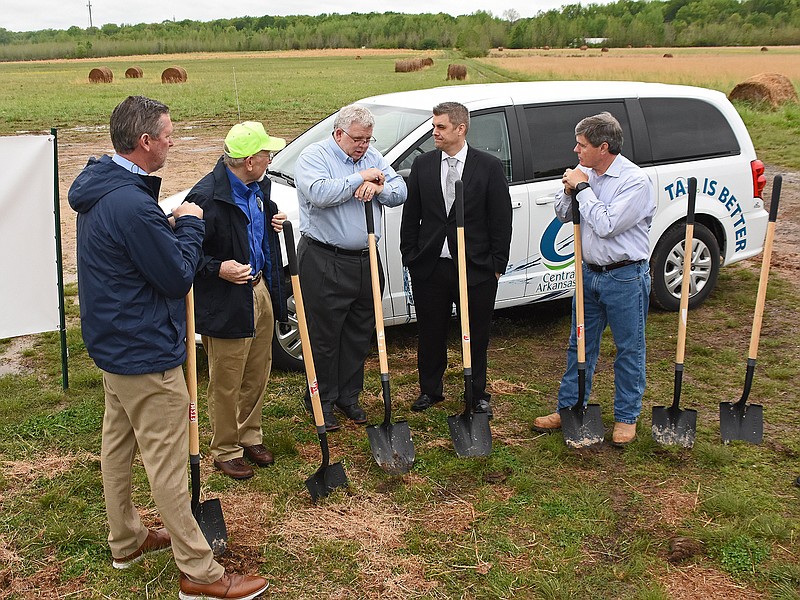 Officials threw the symbolic first shovelfuls of dirt at a field in Cabot near the highway where a planned solar array will provide power for Central Arkansas Water, the state's largest water utility.

The planned 4.8-megawatt solar plant at 1300 Richie Road will occupy 30 acres near a residential neighborhood and not far from the lanes of U.S. 67/167.

Arkansas solar company Scenic Hill Solar will construct and operate the plant under an initial 20-year agreement with the water utility.

Utility regulators approved development of the array in December.

Referring to the size of the plant, Halter said that at 4.8 megawatts the plant will produce more than 8 million kilowatt-hours of electricity annually, generating power worth $800,000 at market rates.

The project will add to the local economy and will be highly visible, Halter said.

The construction schedule will make the plant operational before the end of 2021, Halter said.

Central Arkansas Water purchased the Cabot property in 2019 and will lease it to Scenic Hill Solar, according to a news release from the utility. The utility will achieve an estimated $7 million in energy-related cost savings over 30 years as a result of the project.

According to the release, electricity generated by the plant is expected to satisfy about 20% of the utility's current energy expenses.

The solar array will use a ground-mounted single-axis tracking system, according to Central Arkansas Water.

"We want alternative methods of saving the environment and doing better things, and that's what Cabot's about," Kincade said.

He added that he supports the project "totally" and believes the citizens do, too.

Tad Bohannon, chief executive officer of Central Arkansas Water, thanked the city for the "great partnership" and said officials look forward to the day "we can flip the switch and turn on the solar."