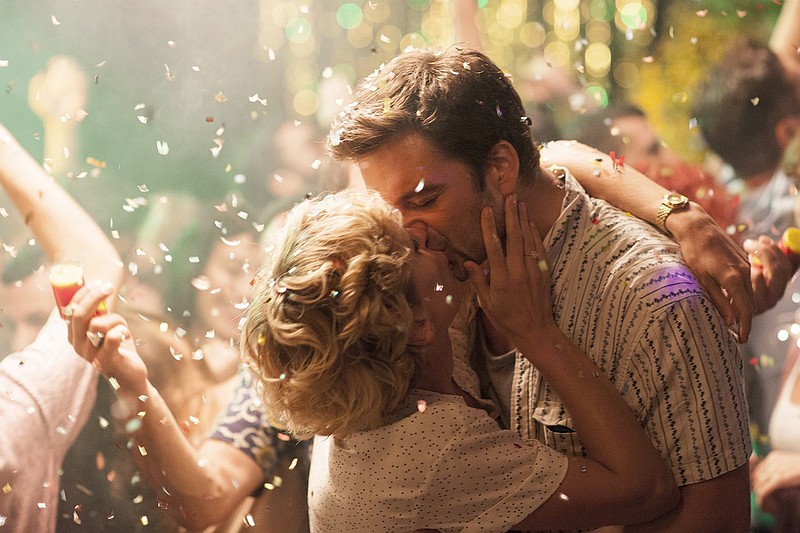 Chloe (Denise Gough) and Mickey (Sebastian Stan) are lovers with an exhibitionist streak in “Monday,” Argyris Papadimitropoulos’ essay on what the French call amour fou.

The last time I reviewed a romantic drama ("Long Weekend"), I ended up being pleasantly surprised by how likable the characters were. So I tried to go into "Monday" with the same open mind guided by past evidence of optimism.

And my reward for that optimism was the cinematic equivalent of repeatedly opening the fridge, staring for several minutes, and leaving because I forgot why I entered the kitchen.

I do feel guilty for the review I'm preparing to launch into because IFC was very kind and provided me a review copy without question. Some studios make me jump through lots of hoops only to deny me a screener at the last second.

But "Monday" is a movie that had me bored out of my mind 50 minutes in. When the credits finally did appear, I didn't know which emotion was more powerful, relief that it ended or anger at how its ending left me unsatisfied.

Having had some time to process the whole film, I believe I can safely say I understand how Saito felt at the end of "Inception," when he's described as "an old man, filled with regret, waiting to die alone."

The premise of the movie is simple enough. Sebastian Stan plays an American DJ living in Greece when, by chance, he meets an American lawyer, played by Denise Gough, and they supposedly fall in love at first sight.

And I'm not exaggerating on the speed with which these two meet and do the deed. Even my wife remarked, "I mean ... we're like two minutes in. They fell in love faster than a Disney princess."

They swap names, she kisses him (some alcohol is involved), and bam, they wake up naked on a beach with families and children playing around them. I did get a chuckle at how the police in Athens treat them. You really get a feel for the stereotype that Europeans hate American tourists because so many of us go over there and break all the rules.

But the police explain anti-nudity laws to Mickey and Chloe in plain English.

If the rest of the movie had just been a short and light tale about two Americans falling in love in a foreign country, I think I'd have been fine with that. It would have been a forgettable cliche.

Chloe eventually tells Mickey she has to go back to America in 24 hours. They then spend an entire day together, having sex just about everywhere they can -- on a beach, on a ferry, inside whatever room they can find.

The scenery in Greece is pretty, and I wish the movie had spent a little more time showing me the countryside instead of forcing me to watch Stan and Gough get down and dirty every 15 minutes.

Anyway, I'm sure you know based on past cliches what happens next. She's at the airport preparing to return to America when Mickey realizes he loves her. His buddy races him to the terminal where he calls out her name. Chloe is so moved by his appearance that she decides to stay and move in with a man she's known for 24 hours. It's pretty typical stuff.

And the rest of the film is just Mickey and Chloe realizing that moving in together after knowing each other for 24 hours could have some consequences.

"Monday" seems to go in this endless loop of Mickey and Chloe going to parties and having sex. It gets old pretty quick. And whatever chemistry our main characters started out with vanishes fast.

The main characters seem to be playing a game of "what ridiculous place can we have sex next?" And it keeps escalating. When Mickey is moving Chloe into his apartment, they literally pull the truck into an alley, climb into the back on her couch and have sex right there in broad daylight.

Later they decide to try it in a closed restaurant. And the movie just gets more and more ridiculous until they're literally driving through Athens on a scooter while naked and yelling obscenities at police.

Do you remember 2014's "Edge of Tomorrow" with Emily Blunt and Tom Cruise? The tagline was "Live. Die. Repeat." Well, the tagline for "Monday" should be "Dance. Boink. Repeat."

You wouldn't think director Argyris Papadimitropoulos could stretch such a repetitive process into a two-hour movie, but he somehow does.

There are a few narrative threads that are given maybe two scenes apiece, leaving me wondering if they're nothing more than filler in between sex scenes. Mickey supposedly has a son and an estranged wife. A little plot thread involves Chloe trying to help him get partial custody of his son (whom we never actually see). Then, on Chloe's end of the story, there's this ex-boyfriend named Christos who is trying to control her life for unknown reasons.

Neither of those are given much attention, so they're left as anemic attempts at story blowing in the beach breeze. The side characters in this movie don't really seem to have much reason for existing other than filling seats at the many parties Mickey and Chloe attend.

During one party scene, I tossed my hands into the air and started asking questions at my television screen. "Who are the people at this party? Why am I supposed to care about them?"

I started having flashbacks of Tommy Wiseau's "The Room." Side characters inexplicably show up and exit without any real benefit or reason. I wondered if scenes explaining Mickey's and Chloe's friends were cut, not that I wanted those hypothetical scenes re-added to the film.

"Monday" also has a vague timeline. Three or four times in the movie, giant white text appears on the screen letting me know it's Friday. Which Friday? The same Friday? I had no clue until someone asked Mickey and Chloe how long they've lived together, and Chloe responds, "Six months."

Prior to that, there was no indication of how much time had passed in the film's story. It just felt like the movie existed in some vague alcohol-fueled haze in Mickey's and Chloe's minds. My wife theorized the movie was just someone's daydream.

The longer "Monday" stretches on, the more nonsensical it becomes. At some point, Mickey and Chloe find themselves in an underground club on Christmas, and I swear the dialogue has diminished to a conversation between toddlers. Here's an exchange after Chloe suddenly asks Mickey to get some drugs:

Holy hell in a handbasket. By that point I was just angry at the movie for continuing to exist. "Monday" grew so distasteful in its aimless wandering that I actually began to miss "Thunder Force." At least it had a coherent plot and chronology.

As I continued to ponder why "Monday" exists, a theory formed in my head. In 2014, Adam Sandler admitted he chose movies based on where he wanted to vacation. That's how we ended up with offensive trash like "Grown Ups."

I started to theorize "Monday" might exist simply because people involved in the movie wanted to spend some time in Greece. Almost like ... folks wanted their vacation to be a tax write-off or a business expense. So they just hastily made a movie without any real story to accomplish that goal.

That's the only hypothesis I could produce to explain this film. Because it literally ends without any explanation. There's no resolution, no payoff. It just quits like a pony ride outside the grocery store once your quarters run out.

When I try to dig really deep to find a compliment for this film, all I can come up with is Stan and Gough start the movie likable enough. Had "Monday" just been an 80-minute breezy romcom about two people falling in love, that wouldn't have left me angry. I could have just forgotten about the film and moved on with my life. Instead, the movie has the audacity to drag on without any real hint of a story or character development.

"Monday" is a crime against cinema. 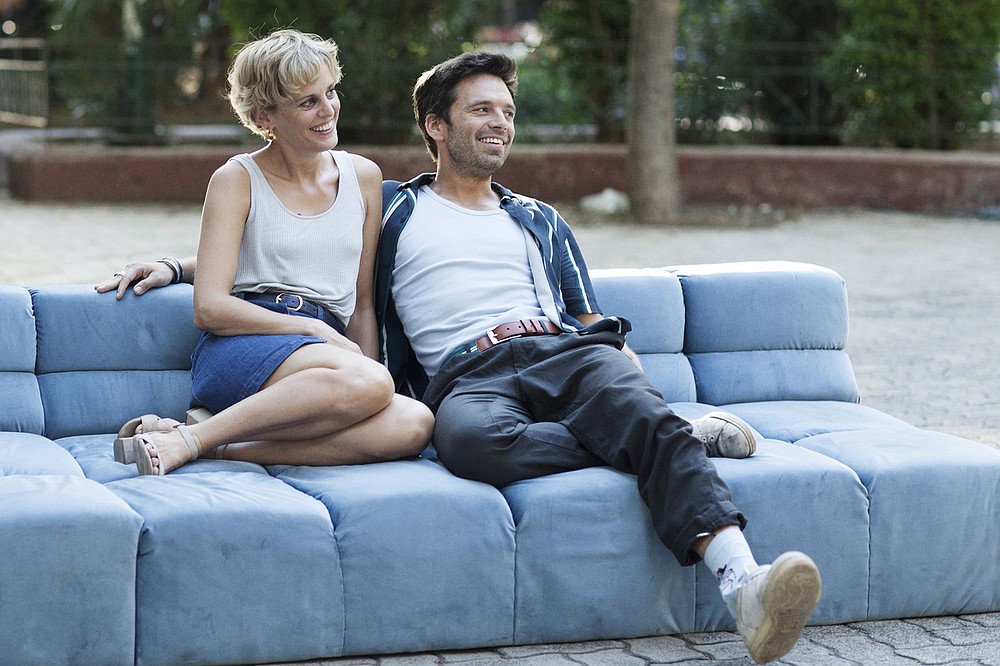 Friday, I’m in love: American ex-pats Chloe (Denise Gough) and Mickey (Sebastian Stan) meet at a disco-thumping house party on a Greek island and stick together for a year in “Monday.”
ADVERTISEMENT