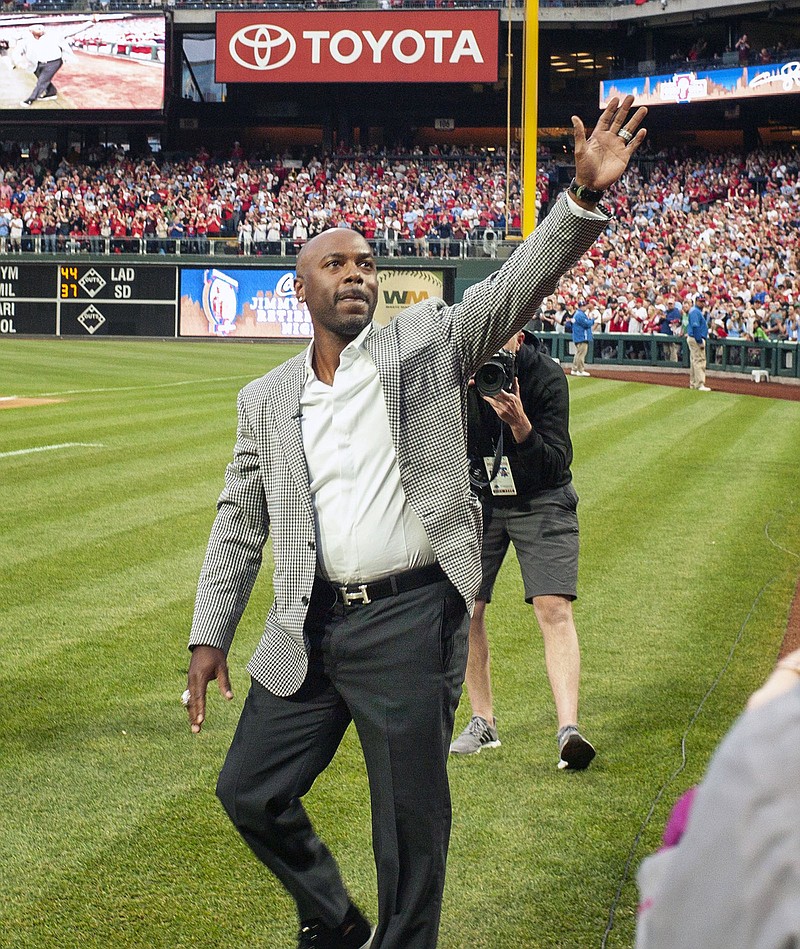 PHILADELPHIA -- When Jimmy Rollins made his first All-Star team as a rookie with the Philadelphia Phillies 20 years ago, the percentage of Black players in the majors was 13.

As the Phillies celebrated Jackie Robinson Day along with the rest of baseball on Thursday and Friday, Rollins reflected on the decline.

"It's more than just one thing," Rollins told The Associated Press. "Marketing. The NBA and the NFL, those guys' faces are plastered all over the screen. Baseball, there isn't really a great deal of marketing. Obviously, everyone knows about Mike Trout and rightfully so, but there are some young Black players that deserves some light, too."

Rollins pointed to Ken Griffey Jr. and Barry Bonds as popular players who were marketed well when he was growing up.

"But when you start going outside of that select few, the sport itself isn't marketing anyone else in a major way where kids from the inner cities are attracted to it," he said.

Rollins and teammate Ryan Howard won consecutive NL MVP awards with the Phillies in 2006 and 2007. Rollins was the leadoff hitter and Howard batted cleanup for a team that won five consecutive NL East titles, two NL pennants and the 2008 World Series. The possibilities for marketing two superstars on the same dominant team should've been endless.

"I remember we, a lot of Black players, had a phone call with Spike Lee years ago," Rollins said. "We flew out to Chicago. We were with MLB and the union and Spike Lee. We talked about doing commercials. Nothing ever came of that.

"It was like a one-time thing. Not to knock MLB, but they're going to do things that, at face value, look great. But the impact is minimal because there's generally never any true follow-through. That's not just baseball. A lot of organizations do that."

Rollins also attributed the decline of Black players in baseball to socioeconomic factors.

"You need space to play baseball," he said. "You don't have that in a lot of places. In the country, you can find a field. In the city, kids aren't playing stickball. A basketball, you could pick up and dribble. It's easier to find a court.

"You don't have to field nine guys to play basketball. You can play one-on-one. The expense, you need the tools, you've got to pay for travel teams. In other sports, we know it's been well documented. They get sponsored and those things don't happen in baseball.

"Also, you look at how baseball's traditionally passed down from the dad to son. If your father isn't around, the chances of you being exposed to baseball because it's more of a team sport, it's probably less likely to happen."

Rollins recently hosted a special series for Bleacher Report about being Black in major-league baseball. The first part debuted Thursday in honor of Jackie Robinson Day and featured Rollins chatting with Howard, Dwight Gooden and 2020 Rookie of the Year Award winners Kyle Lewis of the Seattle Mariners and Devin Williams of the Milwaukee Brewers.

Lewis and Williams were the first Black players to sweep the rookie honors since Gooden and Alvin Davis in 1984, three years before the BBWAA renamed the award in honor of the man who broke baseball's color barrier.