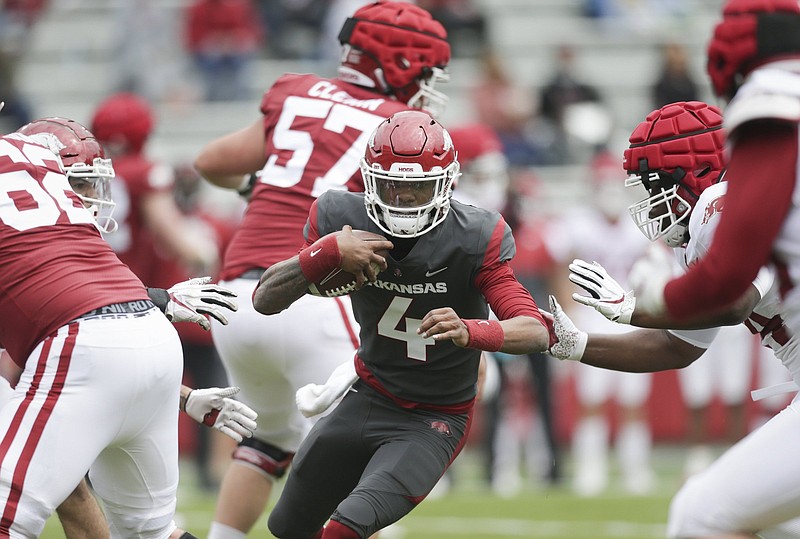 FAYETTEVILLE -- The Red team recovered from a two-touchdown deficit to rally past the White team 30-20 on Saturday in the University of Arkansas' first Red-White Game under Coach Sam Pittman.

With defensive coordinator Barry Odom keeping the calls basic on his side, the offenses capitalized with 723 combined yards and 6.18 yards per play before a crowd of 18,576 at Reynolds Razorback Stadium.

First-team quarterback KJ Jefferson got off to a hot start and finished 6-of-11 passing for 153 yards and 2 touchdowns, and a healthy 231.4 efficiency rating for the White team.

[Video not showing up above? Click here to watch » https://www.youtube.com/watch?v=D4zrtVr8_JY]

On the other side, redshirt freshman Malik Hornsby was 11-of-18 passing for 144 yards with 1 touchdown and a 146.6 efficiency rating. Neither quarterback threw an interception, but Hornsby had at least three dangerous throws that could have been intercepted. Jefferson had one.

"I was really pleased with both of them," Pittman said. "I thought KJ couldn't have had a better start. He did some really nice things. I think he's certainly maturing. He's got command of this team."

Jefferson laughed when asked whether he had "worked over" the first-team defense in closed practice settings like he did Saturday.

The Red squad, composed of the first-team defense and the second-team offense, racked up 228 rushing yards and got touchdowns from T.J. Hammonds, John David White and Reid Turner to overcome the early passing onslaught from Jefferson and the starters.

White led all receivers with 5 catches for 87 yards, including his 24-yard touchdown catch on a rollout from Hornsby with 29 seconds left before halftime to tie the score 20-20.

Hammonds, who scored on an 18-yard run to pull the Red within 17-13 in the second quarter, and Donte Buckner each rushed for 67 yards for the Red.

Receivers Treylon Burks, Mike Woods and Trey Knox, all playing for the White, had two receptions apiece in limited duty.

Jefferson mixed it up with those big three wideouts in the first half, hitting Burks and Woods for long gainers early, then Knox for a deep ball in the second quarter.

Burks got deep on the third snap of the day for a 36-yard gain before Jalen Catalon could bring him down on the right sideline. Woods ran a hitch-and-go on the next snap and sprinted past safety Simeon Blair for a 33-yard touchdown and a 7-0 lead for the White.

Hammonds moved the pile about 5 yards for a 10-yard gain on the first snap for the Red, but Nick Turner stripped the ball free at the end of the run and Jaccorei Turner recovered for the White.

Jefferson and company took advantage with possession at the Red 35, but not completely. After taking an 8-yard sack by Enoch Jackson on a blown flea flicker, Jefferson converted a second-and-long with a 27-yard run to the 10. The White drove to the 1 line and had to settle for Cameron Little's 20-yard field goal.

Tough running from Dominique Johnson, who finished with 59 rushing yards for the Red, set up his team's first score. He broke a tackle from Myles Slusher on a 22-yard run, then added a 7-yard carry after Hornsby's 8-yard keeper. The Red drove to the 9 before bogging down, but got on the board on Matthew Phillips' 27-yard field goal.

A muffed exchange between Hornsby and Hammonds allowed safety Nathan Parodi to recover at the Red 31 and set up another score.

"The majority of the scrimmage I felt like our line played well and our backs ran well," Pittman said. "The most concerning thing with the two offense was we put the ball on the ground. One of them we beat ourself on that one. Nobody made a play. The exchange, we just can't beat ourselves. It went immediately for seven points. Other than that, I thought the offensive line did a nice job."

Two plays after the Parodi fumble recovery, Jefferson found Burks over the deep middle out of the slot for a 31-yard touchdown.

"You're always concerned about guys wide open," Pittman said. "But we have some of the best secondary coaches in the country, and they'll get it fixed. But hopefully it was just a throw and a catch. I've seen different quarterbacks, because they got so wide open, overthrow that throw as well. So Barry and Sam [Carter] will get that fixed. I'm not concerned about it at all."

"That's definitely something we'll watch the film and correct and make sure it doesn't happen again," Catalon said. "I'm not glad it happened, so we understand that no matter how good we think we are we can always get beat if we're not mentally prepared right from the start.

"I definitely think we kind of came in, cleaned that stuff up, and I thought we were consistent on the defense. And on both sides for sure, I felt like we did a lot of good things."

The Red drove 70 yards in just over a minute to tie the game just before halftime on a series than began with Buckner runs of 9 and 15 yards. After Hornsby survived a near interception, he found White for 23 yards to get the drive into the red zone. Two plays later, White shook open near the goal line and Hornsby hit him for the 24-yard score.

The go-ahead touchdown came on the Red team's second possession of the second half after a 60-yard drive. John Stephen Jones completed three passes in a row to Harper Cole, Chris Harris and Cole again for 6, 9 and 7 yards, sandwiching Reid Turner's 12-yard run. After a pass inference call on Nick Turner put the ball at the 15, Reid Turner navigated over the left side for the go-ahead 15-yard touchdown.

The Red extended its lead to the final score of 30-20 on Phillips' 26-yard field goal early in the fourth quarter, capping an 8-play, 35-yard drive engineered by Lucas Coley. Buckner had a 12-yard run to ignite the series, and Coley followed with an 11-yard strike to Darin Turner to get the Red unit into the red zone.