One ‘little country road’ in Pulaski County is a big issue 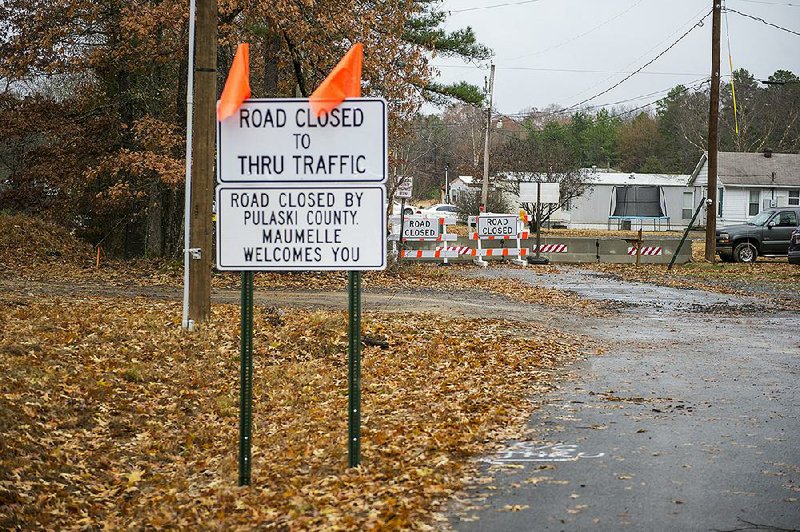 This sign notifies drivers that the southern end of Short Marche Road in Maumelle is closed but not at the direction of city officials, Mayor Caleb Norris said.

An attempt to force Pulaski County to open up a road near an Interstate 40 interchange near Maumelle through the Legislature was turned aside last week, keeping the once heavily traveled road closed.

The Arkansas House of Representatives’ Public Transportation Committee shot down a bill that would have prevented county governments from closing certain roadways within a quarter-mile of a U.S. highway or interstate.

Rep. Mark Lowery, the bill’s sponsor in the House, said the goal was to force Pulaski County Judge Barry Hyde to open the end of Short Marche Road near White Oak Crossing near the county’s border with Maumelle.

Short Marche Road is a 1.2-mile offshoot of Marche Road that runs between that road in Pulaski County jurisdiction to where it is gated near the Maumelle-controlled White Oak Crossing near its intersection with I-40.

“The main issue has been in all the planning stages of the White Oak Crossing interchange that the City of Maumelle put in all the documents refer to that begetting access to Short Marche Road,” Lowery said. “It’s our feeling that public dollars have been taken, and for that road to be closed off almost creates a misrepresentation to the federal government on the planning money that was presented and also to the voters in Maumelle that voted to support that.” Lowery said many of the constituents of the representatives on the committee may have influenced their decision to oppose the bill.

Some people in the Oak Grove Community may be seeking civil action against Hyde over the road’s closure, Lowery said.

Hyde said the road was closed in late 2019 because the traffic coming through was more than it was supposed to handle.

The road is paved but only 14 feet wide or less in many sections, leaving little room for oncoming cars to pass. There is no other place to walk besides the roadway.

“That road went from about 30 cars a day just going back and forth on a dead-end road to becoming a through route for 1,000 cars a day,” Hyde said. “And I mean UPS trucks, garden trucks, dump trucks, you name it.” And that was without White Oak Crossing being developed. Hyde said when he asked Metroplan, the region’s planning organization, how many cars would be going through per day once White Oak Crossing was improved, they told him it would jump to 2,400 cars per day.

“It’s just a little country road,” he said. “The bottom was falling out of it. When two trucks would pass each other going opposite directions, one would get into people’s yards. It was just a mess. So when the interstate opened. I closed the road.” The road is closed to all through traffic besides emergency services, to which Hyde said he gave keys to open the gate.

Hyde said the county’s policy to not make major changes to roads contributed to the decision to keep the road closed. To improve the road to conditions suitable for the traffic, the county would have to spend $3 million that would both take land away from residents and increase the road’s traffic counts, he said.

The project to connect Maumelle to I-40 with a third entrance has been a long-term project for the city dating back decades. Former Mayor Mike Watson worked on the project for his entire 12-year tenure, and the groundbreaking took place in late 2018 when current Mayor Caleb Norris was elected.

“We’ve had a very linear egress and ingress — one road. That should help with traffic congestion but should also be a tremendous opportunity,” Norris said about the project at the time. “It opens up a big chunk of land. We’re hoping to get economic development that we can’t get when we’re pulling Maumelle numbers, the number of cars that go by a business. We’re hoping to get restaurants and retail and shopping.” Norris has not responded to requests for comment on the issue.

Hyde said Maumelle sought access to the road to relieve traffic congestion upon the project’s completion.

“When they annexed the land to build [White Oak Crossing], they annexed right up to the end of the dead end,” Hyde said. “When the construction for the Interstate 40 interchange began, I was asked, ‘Can you open this road so that we have some access here?’” The county road’s closure brought the discussion to the government of Pulaski County.

Residents in the area were on both sides of the issue, with some saying they bought property expecting the road to remain open.

Others said they purchased property when South Marche was a dead-end road and they wanted it to remain that way.

Justice of the Peace Phil Stowers sponsored and passed a resolution that “strongly encouraged” Hyde to reopen the road.

Hyde called decision-making over neighborhoods the “absolute worst job” he has to do, a sentiment shared by Stowers.

After the bill failed last week, Stowers said state law gives Hyde the ability to do what he sees fit with the road.

“Although I adamantly disagree with Judge Hyde’s decision in 2019 to blockade Short Marche Road and I find his decision unjust, it is state law that granted him the liberty to do so,” Stowers said. “Sen. Mark Johnson and Rep. Mark Lowery attempted to amend state law to this regard in this legislative session, and unfortunately their efforts fell short of the votes needed.” The closure has prompted some residents to try to intimidate those who oppose the road’s reopening.

A resident who asked not to be named said she has had people dump trash on her property, make intimidating posts on social media and have tense confrontations on her property over the issue in the months since the decision.

She said that while the road was open, people often drove on her property to pass other vehicles and, when she went for walks along the road, she was run off the road by passing vehicles.

Hyde said that under certain conditions he would reconsider opening the roadway again.

There has been discussion about extending White Oak Crossing to Arkansas 365, the judge said, which would ease the pressure on Short Marche Road.

“That would become the main artery that connects White Oak Crossing to Highway 365 and provide that access,” Hyde said. “And it would be at that point, according to our road plan, that we would reconsider reopening Short Marche.”