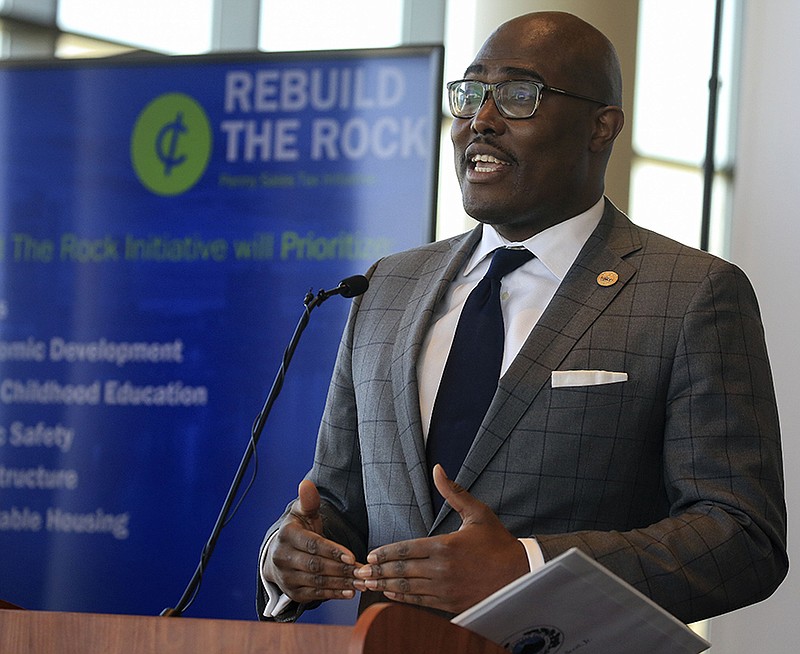 A first attempt at shepherding Little Rock Mayor Frank Scott Jr.'s proposed sales-tax increase through the Little Rock Board of Directors stalled Tuesday evening when city directors declined -- at least for the time being -- to advance the measures necessary to send the tax to voters.

Residents must approve Scott's proposed 1 percentage-point sales-tax increase for it to be enacted, but first, city directors must call for the referendum. Scott has asked officials to move quickly to set a July 13 special election.

Nevertheless, on Tuesday, city directors declined to give swift approval to twin ordinances teeing up the tax increase. As a result, their decision will extend review and discussion of the proposal for at least another week.

A motion by at-large City Director Antwan Phillips to suspend the rules and move to a second reading of the paired tax measures failed in a vote of 7-2, with seven voting against. Eight votes were required for the motion to advance.

After the attempt to advance the tax proposal failed to gain the required support, Phillips asked the other city directors why they voted no, but the officials declined to elaborate.

Scott said the two proposed tax ordinances, along with a separate but related resolution, would be reviewed again at a special meeting next Tuesday.

Because the city will allow a 10-year, three-eighths percent sales tax used for capital improvements to sunset at the end of December, if voters approve the mayor's sales-tax hike this summer, then the city's local rate will increase by five-eighths percent beginning next year.

If the increase is approved, then the sales-tax rate on most purchases in Little Rock will rise to 9.625% when accounting for state and county sales taxes.

Scott's new sales tax would have no sunset date. If city directors call the election, then residents will get to vote on adoption via a simple for-or-against ballot question.

Included in the mayor's proposal, which has been dubbed "Rebuild the Rock," are a wide array of "quality-of-life" improvements that encompass parks, public safety, infrastructure and early-childhood education.

A total of $530 million over the first 10 years of the tax's existence would fund new exhibits at the Little Rock Zoo, a fire station in west Little Rock and more. Construction of an indoor sports complex using the new tax revenue would be expected to require an estimated capital investment of $37 million.

Improvements to Hindman and War Memorial parks alone are estimated to total $30 million.

Prior to the start of the meeting on Tuesday evening, agenda materials included a resolution stating the general categories of use for the revenue expected to be generated by the proposed sales tax, which officials estimate would raise $53 million annually.

The largest share, 34%, of the proposed funding categories in the resolution would go to parks and recreation, golf and fitness, followed by the categories of public safety and infrastructure, which would receive 12% each.

According to Scott's proposal, a citizen-led commission would provide oversight on spending and hear project updates during quarterly meetings, as well as make recommendations to the mayor and city manager on future project spending.

Funding reallocation would occur every 10 years through a resolution introduced by the mayor that would have to receive board approval by the end of December prior to the 10th year of the previous resolution.

The mayor first proposed increasing the city's sales-tax rate in his 2020 State of the City address, but he was forced to drop the proposal not long afterward when the covid-19 pandemic struck the U.S. last spring.

Scott revived the effort to enact a new sales tax in his most recent State of the City address, which was broadcast virtually on March 25.

The city's budget approved for 2021 accounted for approximately $210 million in general-fund expenditures. Adding $53 million in revenue per year would represent an increase roughly equivalent to a quarter of the current general-fund budget.

Prior to Tuesday's vote, city directors heard from the co-chairs of a strategic group affiliated with the Little Rock Regional Chamber of Commerce called Think Big Little Rock, which expressed support for the tax increase.

Co-Chair Chris East called the mayor's tax proposal a "fulfillment" of many of Think Big Little Rock's discussions about the future of the city.

But Gregory Moore of the group Arkansas Community Organizations asked city directors to table the proposal and urged them to give residents time to recover from the covid-19 pandemic before imposing a new tax.

Additionally, Moore said housing should be a much bigger priority under the proposal and called for more details on the specific spending categories.

"For most people in Little Rock, golf and the zoo are not the No. 1 concern," Moore said.

Members of the board heard from local business and economic development officials on the implications of the tax increase and its associated projects.

Bryan Day, the executive director of the Little Rock Port Authority, told officials that the tax would provide millions of dollars for economic development that the port then could leverage.

The funding, leveraged with outside public and private dollars, "ultimately will allow the city to create an industrial park/port unlike anything else in the region," Day said.

Gretchen Hall, the president and chief executive officer of the Little Rock Convention and Visitors Bureau, said sports-feasibility studies conducted by officials with the bureau suggest an indoor sports complex would run an operating deficit ranging from $152,000-$200,000.

However, the economic activity of such a complex would be between $8 million and $9.7 million annually, "depending on the size and scope of that facility," Hall said.

The study on the indoor complex was originally conducted in 2015 and updated in 2019, she said.