Bears built on playmakers in '21 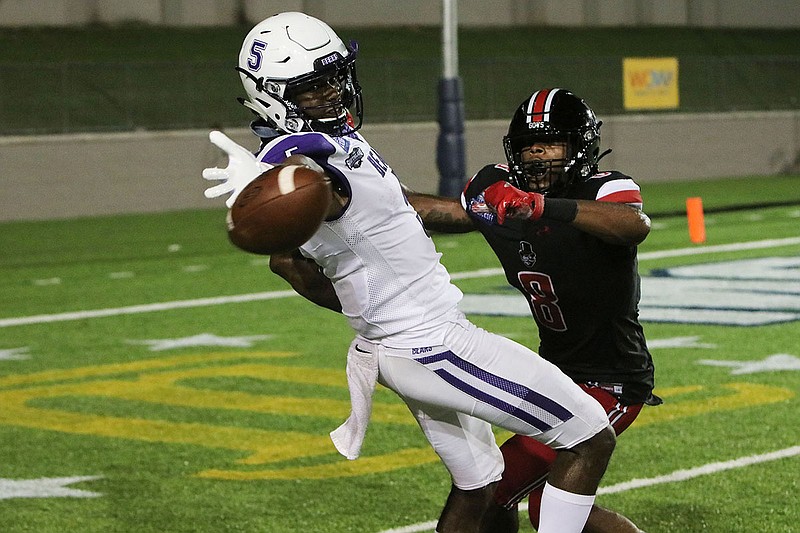 UCA receiver Lujuan Winningham (5) had 12 touchdowns last fall for the Bears after scoring eight as a sophomore in 2019. (Photo courtesy University of Central Arkansas)

CONWAY -- Record books won't ever reflect the 2016 game between Texas high schools Atascocita and Klein Oak. With lightning in the area and Atascocita up 17-3, the game was ruled a no contest after a two-plus-hour suspension in the third quarter.

Don't tell that to Lujuan Winningham.

"We ran them," Winningham said.

It was the only time Winningham and Tyler Hudson crossed paths in their high school careers, growing up no more than 30 minutes apart in the Houston suburbs of Humble and Spring, respectively.

Only when Hudson arrived in Conway in June 2019 did the two Texans meet again. It was the start of a partnership that will be the keystone in 2021 to a University of Central Arkansas that continually has progressed since the start of the Nathan Brown era in 2018.

"They are really as good as any two receivers I've had," Brown said. "If they didn't wear different numbers, [with] some of the things they do, you'd think they were the same person."

But the pair have taken different paths to get to this point.

Winningham redshirted in 2017 and caught only 12 balls during his first season of live action with the Bears in 2018.

Hudson came along the next season, and the former 3-star recruit and No. 10 wideout in the state of Texas didn't need long to show why he'd been so highly regarded.

Hudson likely would've surpassed the century mark as a sophomore had UCA played a full slate in the fall rather than just the nine games it managed as a result of the coronavirus pandemic. He piled up 845 yards on 50 catches, good for 12th-most in the FCS at 93.9 yards per game.

"Coming in, I was used to being the best receiver and I'd always get the ball first, so when I met Lujuan I had to learn I'm not going to get the ball every play," Hudson said. "This year, I came in like, 'OK, I might not get to 1,000, but we're going to have a great season because me and Lujuan bounce off each other.'

"If he's going crazy, then I know I'm about to start going crazy and vice versa."

Hudson knew because he'd seen it in practice.

As Hudson emerged during his freshman campaign, so too did Winningham as a redshirt sophomore. The 6-3, 190-pound wideout caught 50 passes for 814 yards and 8 touchdowns en route to first-team All-Southland honors despite a broken arm that sidelined him for four games.

Winningham followed that up with 12 more touchdowns last fall, part of a UCA passing offense that has ranked in the top 30 of the FCS each of the past three seasons.

Their production is helped by the steady presence of quarterback Breylin Smith, who enters his sixth and final season of eligibility with the Bears in the fall.

It cuts both ways. Just as Hudson and Winningham have learned to trust their quarterback, Smith has discovered even more confidence in his pair of premier pass-catchers.

"Just knowing when those guys are one-on-one, or when something may not look right on the inside, having two security blankets on the outside is important," Smith said. "When you watch them, a lot of stuff isn't fancy -- it's just I think my guy is better than your guy."

The two are built similarly. Hudson comes in an inch shorter and 5 pounds lighter than Winningham.

Yet they've distinguished themselves on the field. Hudson is the likelier of the two to go up and make a one-handed grab -- "all the jumping, spectacular stuff," as Winningham describes it.

Winningham is sure-handed and fundamental. In the Bears' spring scrimmage, the senior pulled in consecutive passes to settle a first-team offense that had looked shaky for much of the opening 30 minutes.

Together with Smith, junior running back Cameron Myers and an offensive line returning all five starters from 2020, UCA's offense is the reason why the Bears could do more than just win their first playoff game since 2016.

"It should be a crazy year," Hudson said. "The offense is so powerful. If we don't make something shake, I'll be flabbergasted, no lie, because there are too many weapons." 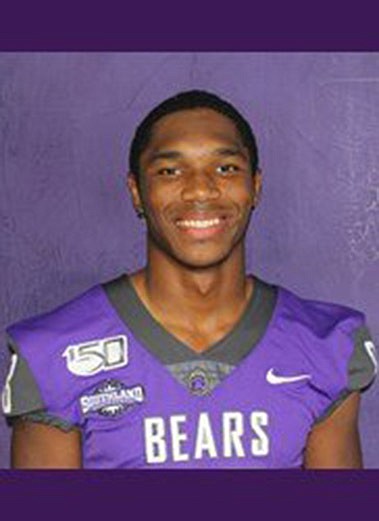