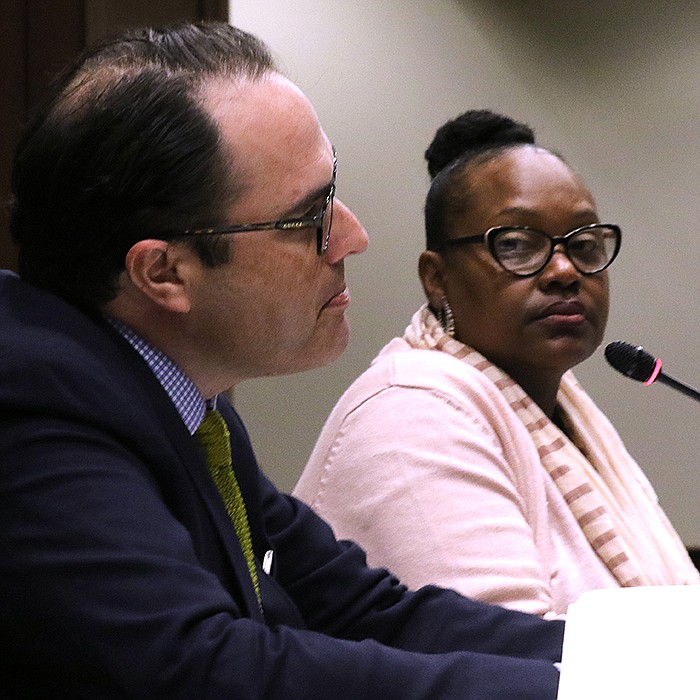 A bill stating that Arkansas teachers may teach religious beliefs of creation alongside scientific theories failed to advance from the Senate Education Committee on Wednesday.

The sponsor, Rep. Mary Bentley, R-Perryville, said many teachers had asked her for the ability to teach "counter-theories" and open up the class for debate among students. Sen. Linda Chesterfield, D-Little Rock, said the bill would allow all religion's creation stories to be taught, which would lead to "consternation."

Six of the eight committee members were present Wednesday, and three voted no.

A 1982 federal court ruling held unconstitutional an Arkansas law that mandated equal treatment of "creation science and evolution-science." The U.S. Supreme Court also struck down the state's ban on teaching the theory of evolution in 1968.

A bill aiming to nullify federal gun laws won approval of the Arkansas Senate on Wednesday.

The Senate voted 27-6 to approve House Bill 1390, by Rep. Johnny Rye, R-Trumann, sending the bill to the governor.

The bill is similar to several other pieces of legislation that deal with the concept of state nullification of federal gun laws. Gov. Asa Hutchinson has said that he had "significant constitutional concerns on those bills."

The Senate on Wednesday approved a bill that would bar the state, or any local government in Arkansas, from mandating covid-19 vaccinations.

The bill would allow exemptions for schools or public hospitals to seek specific approval from lawmakers to mandate vaccinations. Private businesses would also have the option to require their employees to get the vaccine.

Gov. Asa Hutchinson announced earlier this month that he would not require employees of state agencies to receive the vaccine.

The Senate voted Wednesday to send the House a bill that would dissolve the board that oversees health insurance plans for state government and public school employees.

Hickey said the bill would temporarily shift decisions and policy determinations for the State and Public School Life and Health Insurance Program to the Board of Finance.

The Senate on Wednesday approved legislation that would include an unborn fetus under the definition of a "person" in the aggravating circumstances in Arkansas' criminal code.

The bill was written in response to an Arkansas Supreme Court decision last year to overturn the death sentence of Brad Hunter Smith, a Cleveland County man convicted of killing Cherrish Allbright, whom he believed to be pregnant with his child.

A bill that would grant the state Department of Commerce spending authority for the next fiscal year next won sufficient votes to clear the Senate on Wednesday in the chamber's fourth vote on the measure.

The Senate voted 28-2 to approve Senate Bill 132, sending the bill to the House for further action. That was one more vote than the 27 required in the 35-member Senate for approval. The Senate initially voted on the bill Wednesday. The bill also failed Monday and Tuesday.

Garner's bill that would have barred the commission from having an office in China previously failed to clear the House Agriculture, Forestry and Economic Development Committee. In last year's fiscal session, the Joint Budget Committee rejected Garner's proposal to close the office after Preston said the department already planned to trim the office's budget from $285,000 to $125,000 a year, starting in July, and employ an American citizen as a liaison in China.

A bill encouraging schools to adopt certain standards on instructional materials that deal with race and ethnicity gained the favor of the Arkansas House on Wednesday.

The bill says local school boards may implement those recommendations, and there is no enforcement mechanism for schools that do not do so. Lowery said he had agreed to amend the bill on the Senate end to further clarify that the bill is permissive with language provided by the Arkansas School Boards Association.

Lowery said the bill was a result of a collaboration with House Education Committee members Rep. Gayla McKenzie, R-Gravette, and Rep. Reginald Murdock, D-Marianna. Though Murdock ultimately disagreed with the provision aiming to prevent schools from teaching that the United State is systemically racist, he said he supported the bill because it would not preclude teachers from instructing on historical facts and because the collaboration represents progress.

Democratic representatives who spoke against the bill said it would preclude teaching about systemic inequities, and that more lawmakers of color should have been brought to the table.

The chamber voted 63-13 to send the measure to the state Senate for further consideration. Three lawmakers voted present.

For the third time Wednesday, a Senate committee rejected a proposal to do away with early voting on Mondays in Arkansas.

Currently, early voters have until the Monday before election day to cast ballots. Senate Bill 485 by Sen. Kim Hammer, R-Benton, aims to make the Saturday before the election the final day of early voting.

The committee heard testimony on both sides of the issue from members of the Pulaski County Election Commission. Kristi Stahr, the commission's chairwoman, said the bill would provide a buffer to give election workers more time to process votes and avoid errors, while Joshua Price, another commissioner, said allowing early voting on Mondays hasn't created any problems and taking it away would confuse voters.

SB485 failed on a voice vote. The committee's vote was expunged, which means Hammer can bring SB485 before the panel again.

A bill that would do away with the requirement that the University of Arkansas for Medical Sciences accept a certain number of students from each of the state's four congressional districts will be referred for interim study, the sponsor said Wednesday.

Rep. Justin Boyd, R-Fort Smith, said he decided to pull House Bill 1707 after it failed to advance from the Senate Education Committee.

The House approved a bill to allow an emergency medical technician to carry a concealed handgun without a license.

The bill would modify the state's concealed carry law that which now allows police officers and prosecuting attorneys to carry a concealed weapon without a permit.

Sen. Trent Garner, R-El Dorado, the bill's Senate sponsor, told a House committee the bill would not give "qualified immunity" to emergency medical technicians if they shoot someone while on the job.

A bill that aims to close a "loophole" and allow someone to carry a concealed weapon at public places passed the House Wednesday.

The House approved Senate Bill 573, by Rep. Kendon Underwood, R-Rogers, which would prevent counties and cities from displaying signs that bar conceal-carrying at government buildings.

The bill was originally voted down in the House Judiciary Committee after push back from some lawmakers who questioned whether the bill takes away local control from cities and towns, but on a later vote the bill passed.

The House approved a bill Wednesday that will take away funds inmates received as a part of the recent federal coronavirus stimulus package and put it toward their debts.

Senate 544, by Rep. Marcus Richmond, R-Harvey, said his bill will take stimulus funds from inmates and use them to pay court costs, fines or restitution payments. If the inmate doesn’t have any outstanding payments, the stimulus check will be used to help other inmates pay their outstanding debts, he said.

CORRECTION: Brad Hunter Smith of Cleveland County was convicted of killing Cherrish Allbright in 2015. An earlier version of this story gave an incorrect name.