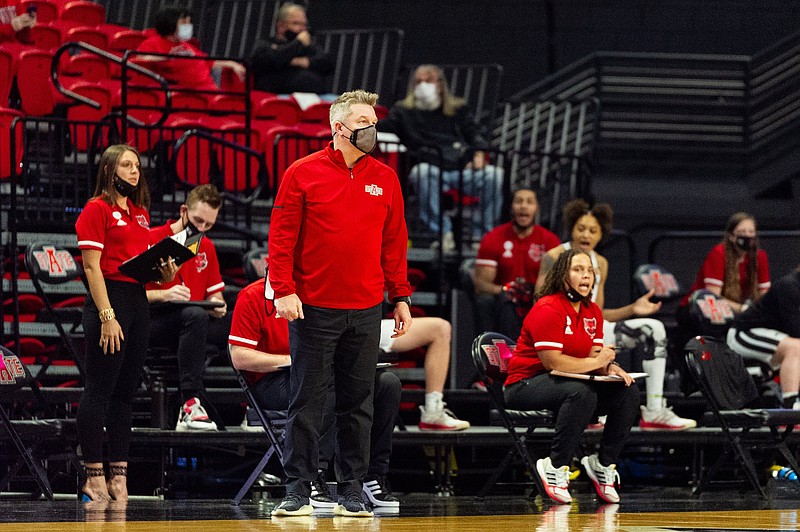 Arkansas State Coach Matt Daniel said he expects as many as nine newcomers to join the Red Wolves by the end of summer. “It’s going to be a lot like a WNBA or NBA roster. We’ll have camp in June and see what the roster looks like then,” Daniel said. (Photo courtesy Arkansas State Athletics)

A hibachi dinner, escape rooms and a baby shower for assistant coach Weston James and his wife; team bonding for the Arkansas State University women's basketball team has run the gamut this offseason, but the team-fusing events feature fewer players than before.

The Red Wolves' roster is down to seven players this spring, the product of another seven -- including leading scorer Jada Stinson and top rebounder Peyton Martin -- who have left since the close of the 2020-21 season in March. With a short roster, the Red Wolves started offseason workouts this month, and Coach Matt Daniel expects to as many as nine newcomers to join the program by the end of summer.

One certainty in a year of turnover? ASU will look decidedly different when they return to the court in 2021-22.

"It's going to be a lot like a WNBA or NBA roster," Daniel said. "We'll have camp in June and see what the roster looks like then."

The NCAA's one-time transfer rule has opened the floodgates across college basketball this offseason. As of Thursday, nearly 950 women's basketball players had entered the transfer portal since the start of last season, with 313 of Division I women's basketball's 343 programs losing at least one player to the portal.

For their part, the Red Wolves have seen seven players depart from a team that finished 9-12 and fifth in the Sun Belt West Division.

Stinson's 12.6 points per game led the Red Wolves in her lone season at ASU following a transfer from Memphis, and she stands among three graduate transfers along with guard Hailee Erickson and Martin -- who pulled down 132 rebounds in 2020-21 who will play at College of Charleston next season. Also making exits are three freshmen: Vic Dames, Hilani Cantone and Mattie Hatcher, as well as junior guard Jordyn Brown.

The volume of transfers guarantees a transformed Red Wolves roster next season, but with three graduates and a penalty-free transfer market, it was also part of Daniel's expectation.

"There wasn't one transfer on our roster that we didn't decide on or that I was shocked by," Daniel said. "Not one. It's crazy times, but it's what the new normal is."

The portal that's taken half of Daniel's team is also where he plans to help replenish his thin roster. The Red Wolves are targeting the post position and guard spots with their remaining scholarships, aiming to replace not only lost talent, but also the veteran void left by the four departing upperclassmen.

"We want to add experience to our roster, Daniel said. "People that play at a high level and have had success. That's what we're trying to build."

"I think we've assembled a very deep, competitive roster," Daniel said. "I don't think we're going to be held hostage because of lack of depth anymore."

University of Arkansas at Little Rock forward Krystan Vornes is set to return to the Trojans next season, Coach Joe Foley confirmed Thursday.

Vornes, a senior in 2020-21, suffered a torn ACL in the first round of the Sun Belt Conference Tournament in March, and will exercise her extra year of eligibility to return to the Trojans in 2021-22.

"That left a tough taste in her mouth," Foley said. "She had played so hard all year. She was considering it anyway and had been talking to me about it. She wanted to finish what she started."

Vornes led the Trojans with 8.9 rebounds per game and finished as UALR's second-leading scorer (9.8 ppg) in 2020-21. She returns as one of four upperclassmen on the Trojans' roster.

"We've needed somebody who could come in and get a bucket," Golden Lions Coach Dawn Brown said. "That's the void that Tyeisha is going to fill."

Juhan, who has one remaining season of eligibility, scored 17.0 points per game last season en route to earning Gulf Coast Athletic Conference Player of the Year honors. The 5-9 guard is expected to slot in next to point guard Joyce Kennerson, who will return from a torn ACL. Both have the ability to play off of reigning Southwestern Athletic Conference Newcomer of the Year forward Khadijah Brown.

In 2020-21, UAPB struggled with guard play and consistent scoring. In Juhan, the Golden Lions may have an answer to both.

"She has an ability to get to the basket at will and she can change her pace and speed," Brown said. "If you play off of her, she'll shoot it. If you get up on her she'll blow by you. She can score on all three levels."

University of Central Arkansas guard Savanna Walker will exercise her extra year of eligibility to remain with the Sugar Bears in 2021-22, UCA Coach Sandra Rushing confirmed.

Walker's 53 assists led the Sugar Bears in 2020-21, and the 5-7 point guard finished third in scoring with 7.1 points per game to help guide UCA to the Southland Conference Tournament semifinals. She joins conference newcomer of the year Lucy Ibeh and guard Jalisa Outlaw among UCA's key returners in its transition to the Atlantic Sun Conference.

Forwards Brianna and Ayanna Trigg -- who averaged 28.0 and 18.6 minutes per game, respectively -- have entered the transfer portal along with guard Romola Dominguez, who appeared in 21 games.

Rushing said she is open to adding transfers but does not anticipate scouring the portal, and instead plans to rely on a six-player freshmen class that includes the recent additions of Skylar Bailey (Kathleen, Ga.) and Leah Perry (Cairo, Ga.).

"I feel like we have a really talented freshman group," Rushing said. "I'm throwing them into the fire."