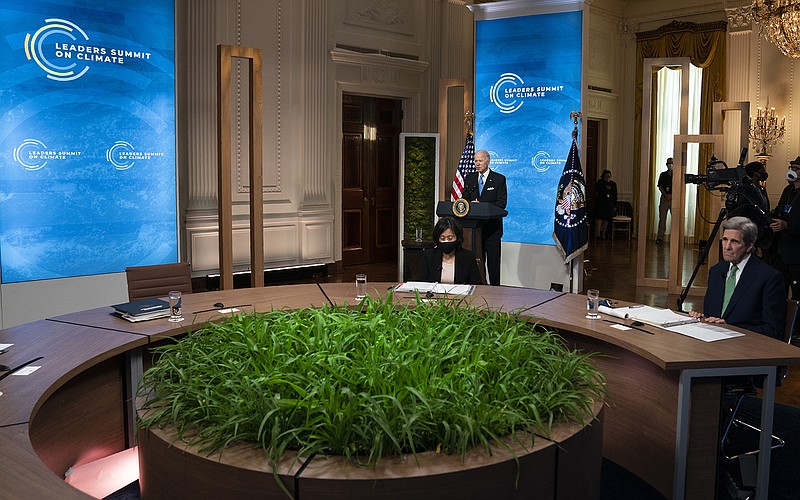 Speaking Friday from the White House during the virtual Leaders Summit on Climate, President Joe Biden said, “When we invest in climate resilience and infrastructure, we create opportunities for everyone.” Special climate envoy John Kerry is at the right. (AP/Evan Vucci)

WASHINGTON -- President Joe Biden used the waning hours of the White House climate summit to hammer home a message aimed as much at Americans as the dozens of world leaders he convened: Combating the Earth's warming is not simply a responsibility, but a chance to boost battered economies.

"When we invest in climate resilience and infrastructure, we create opportunities for everyone. That's at the heart of our jobs plan that I proposed here in the United States," Biden said. "It's how our nation intends to build an economy that gives everybody a fair shot."

[Video not showing up above? Click here to watch » https://www.youtube.com/watch?v=I-fx-1q2PM8]

Thursday's marathon virtual summit was primarily intended to highlight a new U.S. pledge to make deep cuts to its carbon emissions this decade, mend the nation's diplomatic reputation and rally other nations to embrace more ambitious climate goals of their own in coming months.

Friday's session -- which once again featured heads of state, business executives and labor representatives -- was meant to underscore the administration's assurances that combating climate change should not inflict economic pain, but rather help lift up communities across the country and the world.

The closing message was: Go forth and spend, making good on pledges for rapid transitions to cleaner vehicles, power grids and buildings to stave off the worst of global warming.

"The commitments we've made must become real," said Biden, who is seeking $2.3 trillion from Congress for legislation that would partly go for electric charging stations, for laying out an efficient new national electrical grid and for capping abandoned oil and gas rigs and coal mines. "Commitment without doing anything is a lot of hot air, no pun intended."

"We're gonna do this together," Biden said, speaking live to a final Zoom-style screen of leaders of national governments, unions and business executives around the world.

His closing message echoed the sentiments of Kenyan President Uhuru Muigai Kenyatta, who told the summit: "We cannot win this fight against climate change unless we go globally to fight it together."

Republicans for years have forced Democrats on the defensive by portraying climate action as a concession to fuzzy environmentalism at the cost of jobs for ordinary Americans.

And the GOP is sticking to the arguments that former President Donald Trump made in pulling the U.S. out of the Paris climate accord -- pointing to China as the world's worst climate polluter and saying any transition to clean energy hurts American oil, natural gas and coal workers.

Biden, though, is pushing hard to redefine the debate, arguing that renewable energy is at least as much an economic opportunity as an environmental imperative.

It's a message that Biden has repeated over and over -- on the campaign trail, in interviews, in speeches and in articulating the motivation behind his proposed infrastructure plan, which would include large new investments in clean energy, electric vehicles and weatherization.

Biden's pledge this week to cut U.S. greenhouse-gas emissions at least 50% by 2030, relative to 2005 levels, would require far-reaching changes that affect how Americans power their homes, how they travel and even how they grow food.

To meet that goal, the administration ultimately must rely on assumptions about the future that are hard to guarantee. Will a sharply divided Congress, home to some Republicans who say such policies risk leaving behind communities that rely on fossil fuels, fund Biden's proposals? Will future administrations keep in place any new regulations aimed at curbing emissions? And will such policies survive inevitable court challenges?

Biden lined up a cast of Cabinet members and enthusiastic business and labor figures to praise his jobs plan, highlighting his message that building a carbon-free economy can create "good union jobs," as administration officials said repeatedly this week.

"There are no jobs on a dead planet," said Sharan Burrow, general secretary of the International Trade Union. "We will work with everyone for a living planet."

Buttigieg said that a majority of the transportation jobs redesigning roads, laying rail lines and installing electric-vehicle charging stations "will be available to workers without a degree," a group that has suffered acutely during the pandemic-driven economic downturn.

"We are all in this together," he said. "Pursuing a net-zero goal is not a zero-sum game."

Former New York Mayor Mike Bloomberg, who this year was appointed by the United Nations as a special envoy for climate ambition and solutions, underscored that mayors, governors and business leaders -- who continued to push forward climate action during the Trump administration -- will play a central role in the effort to reduce the nation's emissions.

"Cities and businesses hold the key to defeating climate change," Bloomberg said. "They are responsible for the vast majority of emissions. So helping them and incentivizing them to take action really is critical."

Despite the upbeat talk about vast investments in burgeoning technologies and a potential tidal wave of new jobs, there were reminders of the difficult road to making such changes a reality.

Fatih Birol, head of the International Energy Agency, praised the many commitments from public and private officials during the White House summit. But he also warned that tangible action is the only way to alter the world's current path toward worsening climate change.

"I will be blunt: Commitments alone are not enough," Birol said at Friday's summit. "We need real change in the real world right now. The data does not match the rhetoric, and the gap is getting wider and wider."

He cited International Energy Agency findings published this week that project that global carbon dioxide emissions are set to rise by 1.5 billion tons this year -- the second-largest increase in history -- as the world emerges from the pandemic-induced downturn.

Coal demand in the electricity sector will largely drive the emissions rise, according to the agency. National pandemic relief packages so far have not done enough to incentivize the needed shift toward cleaner forms of energy, Birol added.

"We are not recovering from covid in a sustainable way, and we remain on a path of dangerous levels of global warming," he said.

Birol said reasons for optimism exist, from record numbers of solar and wind investments to increasing sales of electric vehicles. But he added that significantly bending the curve of global emissions will require more sweeping efforts, including the development of technologies that are not yet ready for the market.

"Make no mistake," he said, "this is a herculean task."

Adding to that dose of realism were reminders that even as some climate activists have pressed Biden to move more quickly, many Republicans have not embraced his climate aspirations. Rather, they argue that too hasty a shift away from fossil fuels could harm U.S. competitiveness and hurt the very communities that the president says he wants to help.

Senate Minority Leader Mitch McConnell of Kentucky this week tweeted that Biden's "zeal for costly climate policy at home is not matched by our biggest competitors." China accounts for roughly double the greenhouse-gas pollution of the United States, he noted, and has not yet demonstrated a commitment to the same rapid shift. "Democrats can kill U.S. jobs & industries with no real impact on global emissions," he wrote.

Biden's emphasis Friday on the opportunity that climate change presents to create jobs reflects his long-standing strategy of seeking to thread a difficult needle in climate politics. Dating back to his campaign, Biden has tried to embrace the goals of environmentalists in a way that doesn't alienate labor unions and workers who depend on the fossil fuel industry.

His approach has produced mixed results, sometimes angering one side or the other. When he announced this year that he was rescinding the construction permit for the Keystone XL oil pipeline, for example, he got blowback from union leaders concerned about job losses.

In an interview Friday, Biden's special climate envoy, former Secretary of State John Kerry, said he viewed the two-day summit as a clear success, because it showed that the United States is serious about tackling climate change and because it will generate momentum for other nations to do the same.

"We saw presidential leadership trying to raise ambition, which is the essential element of any legitimate effort to deal with the climate crisis," Kerry said, adding: "I think there are a lot of very serious conversations going on in capitals around the world, because of what President Biden convened this week."

Kerry stressed the presidential political selling point that rebuilding creaky U.S. infrastructure to run more cleanly would put the U.S. on a better economic footing long-term. "No one is being asked for a sacrifice," he said. "This is an opportunity."

But Kerry also reiterated that putting the nation and the world on a more sustainable trajectory cannot happen at a summit, but only through what comes after.

"The time for words is over," he said. "There have to be actions."

Information for this article was contributed by Brady Dennis, Steven Mufson, Sean Sullivan and John Wagner of The Washington Post; and by Ellen Knickmeyer, Christina Larson, Seth Borenstein and Matthew Daly of The Associated Press.