Review of deaths set after testimony 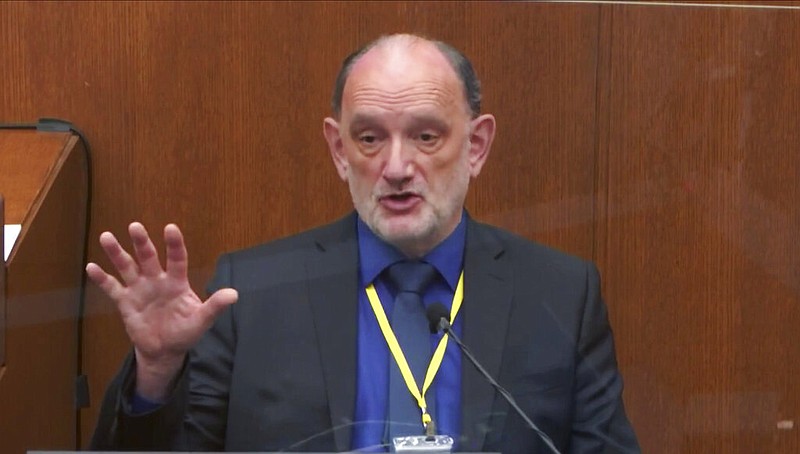 In this image from video, Dr. David Fowler, a retired forensic pathologist and former chief medical examiner for the state of Maryland, testifies Wednesday, April 14, 2021, in the trial of former Minneapolis Police Department Officer Derek Chauvin at the Hennepin County (Minn.) Courthouse in Minneapolis. (Court TV via AP, Pool)

BALTIMORE -- Maryland officials said they will review all in-custody death reports during the tenure of the state's former chief medical examiner after he testified that former Minneapolis police officer Derek Chauvin was not responsible for George Floyd's death.

Dr. David Fowler, Maryland's chief medical examiner from 2002 to 2019, was a key defense witness for Chauvin, who was convicted Tuesday of murder and manslaughter for kneeling on Floyd's neck for more than 9 minutes.

[Video not showing up above? Click here to watch » https://www.youtube.com/watch?v=6be3mCf8FZM]

The announcement of the investigation from Attorney General Brian Frosh and Gov. Larry Hogan was made Friday, less than 24 hours after the attorney general's office received a letter from D.C.'s former chief medical examiner, Roger Mitchell, and signed by 431 doctors from around the country, saying Fowler's conclusions were so far outside the bounds of accepted forensic practice that all his previous work could come into question.

"Dr. Fowler's stated opinion that George Floyd's death during active police restraint should be certified with an 'undetermined' manner is outside the standard practice and conventions for investigating and certification of in-custody deaths. This stated opinion raises significant concerns for his previous practice and management," the letter said.

Fowler testified that the primary cause of Floyd's death was a sudden heart rhythm disturbance during police restraint caused by underlying heart disease, contradicting several experts who said Floyd died from a lack of oxygen. Fowler also said that Floyd's drug use and exposure to carbon monoxide from the police car contributed to his death.

"We agree that it is appropriate for independent experts to review reports issued by the Office of the Chief Medical Examiner ... regarding deaths in custody," Raquel Coombs, a spokeswoman for Frosh, said in a statement.

Fowler told The Baltimore Sun he was not aware of any such consideration of a review and defended the work of his office, noting that he was not solely responsible for autopsy conclusions.

"There's a large team of forensic pathologists, with layers of supervision, and those medical examiners always did tremendous work," Fowler said Friday. He declined to discuss his testimony in the Chauvin trial.

Bruce Goldfarb, a spokesman for the chief medical examiner's office, said the agency is "committed to transparency and will cooperate fully with an inquiry."

Coombs said the review of death determinations will not involve any state officials or staff members connected to a lawsuit filed by the family of Anton Black, a 19-year-old who died in police custody in Greensboro in 2018.

Black's death was captured on video, which showed Greensboro police holding the unarmed man down for more than 6 minutes. Fowler ruled that Black died because of a sudden cardiac event while struggling with police, and not because they pinned him in a prone position.

The attorney general's office is defending the state in the lawsuit filed by Black's family against Fowler, the state and others. They have asked for the Black case to be thrown out.

One of Fowler's office's best-known rulings was in the death of Freddie Gray. According to the ruling, Gray died from injuries suffered in the back of a police van. The autopsy concluded that officers' failure to take care of him and seek medical attention made his death a homicide, and prompted State's Attorney Marilyn Mosby to swiftly file charges against six officers. All were either acquitted or had their charges dropped.