OPINION | OLD NEWS: One of the bicycling Boren brothers made his mark in Arkansas 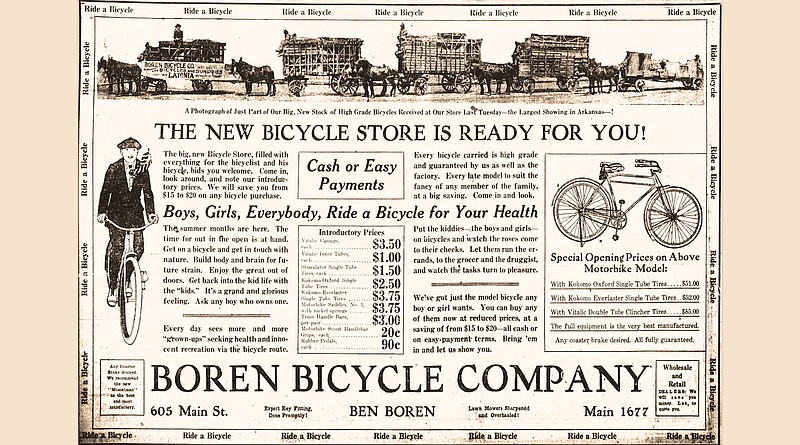 The Boren Bicycle Co. announces it is open for business at 605 Main St. Ad from the April 29, 1921, Arkansas Gazette. Note the shipment of bicycle stock in the photo at the top. (Arkansas Democrat-Gazette)

A new bicycle store opened in downtown Little Rock 100 years ago, and can you sense the excitement in the air?

Ben Boren Bicycle Co.'s first storefront was a ground-floor space at 605 Main St., land occupied today by a corner of the Arkansas Repertory Theatre lobby. In 1921, the Arkansas Democrat was two doors down.

The week Boren opened for business, fire had just blackened storefronts a few blocks south on Main. So, besides the charge of anticipation in the air, we might also imagine a whiff of something charred. That's not meant to be foreboding but just one detail in a bustling 1920s street scene. Picture men in hats, women in long dresses, antique motorcars and the occasional mule wagon or passenger horse, streetcar rails ...

On April 18, 1921, the Democrat interviewed owner Benjamin Easley Boren, learning that he had been in wholesale bike sales for 25 years and spent the past seven exclusively in Arkansas repping for the Shapleigh Hardware Co. of St. Louis.

Boren had remodeled his storefront to accommodate 200 bicycles and an ample repair area in the middle of the sales floor. A mezzanine floor would store more bicycles, which he would buy wholesale by the carload.

"Our family takes to bicycles," Mr. Boren said Saturday. "My brother, Edgar, is vice president and general manager of the Miami Cycle and Manufacturing Company of Middletown [Ohio], and I don't know whether he or I was the first of the two to get into business.

"We will carry a full line of bicycles featuring the Latonia, and I am certain I can job them and retail them at a reasonable profit, for a price considerably better than prices I have found existing here and throughout the state today."

Boren advertised heavily in Little Rock newspapers. Besides bicycles, accessories and repair, his shop offered to fit keys and sharpen or repair lawn mowers. He told the Democrat he would also sell motorcycles. He had hired three repairmen, one of whom was an expert with safes and locks. The shop also had electric tools for repairing motorcycles.

"There are more than 100 machines running in Little Rock and most of them are used in the delivery service. There is no genuine motorcycle service shop here and several users have appealed to me to include a motorcycle shop in our new business."

He estimated there were more than 6,000 bicycles in Little Rock already. The heyday of fascination with pedaling had passed after the 1890s, but he saw a revival of interest, especially among children.

As months passed, his ads focused on Latonia bicycles with prices starting at $28.50.

I see speculation on bicycle-collector websites that Latonia bicycles might have been manufactured at Little Rock by Boren Bicycle Co.; and it's possible Boren assembled machines he sold under that brand. But he didn't manufacture them, at least not while his brother was still at the Miami plant in Ohio.

Ben Boren's first display ad, published in the Arkansas Gazette on April 29, 1921, includes a photograph of five horse-drawn delivery wagons. A banner on the lead wagon reads, "Boren Bicycle Co. [something] April [something] Complete Line Bicycles and Sundries [something] New Latonia bicycles in transit." The caption reads, "A photograph of just part of our big, new stock of high grade bicycles received at our store last Tuesday — the largest showing in Arkansas —!"

Another ad, published May 21, announced that it had already sold 50 Latonias, "which should demonstrate the popularity of this high grade line. Ask anyone who rides a Latonia."

By October, those machines were still being imported from someplace. An ad published Oct. 9 reads in part, "Just received another solid carload — three hundred and forty-five — bright, new Latonia Bicycles; all sizes, styles and colors."

This is the third carload in five months and we take this opportunity of thanking our many friends and satisfied customers of Latonia Bicycles for making it possible to sell so many.

Also, the shop had a load of iron office safes for sale at factory cost.

So where did Latonia bicycles come from?

In 1921, the Latonia Championship Stakes at the now defunct Latonia Race Track in the now defunct Latonia, Ky., was the Kentucky Jockey Club's great autumn special race for 3-year-old colts and fillies. Latonia today is a neighborhood of Covington, Ky., 40 miles from Middletown, Ohio, where Edgar Boren and his son Edgar Jr. were officers at that bicycle factory.

Miami made Racycle, Musselman, Hudson and other brand bicycles and the Flying Merkel motorcycle (see arkansasonline.com/426merkel). In 1923, Miami went out of business. Edgar and son opened a bike shop in Hutchinson, Kan., where Edgar was interviewed in 1929 about his amazing history as a speed-demon bike racer in 1890s Dallas.

So, Edgar came from Dallas.

Also in Dallas, starting in 1902, was Cullum & Boren sporting goods, co-founded by one William Boren. In 1924, Cullum & Boren advertised in the Fort Worth Record Sun that it sold Columbia, Trabune, Racycle, Miami, Hudson, Western and C&B bicycles.

Bear with me, Patient Reader I am working off hints, Census records accessed through Ancestry.com and lists of family members that somehow appear on websites like Rootsweb — all sources of potentially unreliable information, and yet, persuasive, added to what we see in the newspapers.

It appears that Edgar, William and Benjamin were brothers, sons of I.T. and Jennie Boren of Dallas (see arkansasonline.com/426boren). Ike was a merchant who became a fruit farmer. Jennie's mother was born Mary L. Easley -- hence Benjamin's middle name, Easley.

Ben was one Little Rock's best known businessmen even after his death in 1953, because his son Ben Jr. also was into bicycles. Although its mission and name changed a bit over time, the Boren Co. survived more than 40 years as a family-owned concern. Another Arkansas family finally bought it in 1957.

Collectors have found Boren badges on different makes of bicycles, including Schwinns, which further suggests the store didn't manufacture bicycles from raw metal but rather assembled the parts. And that's a great tradition in bicycle shops. That's what allows a local bike dealer to give his customers that dialed-in, custom ride.

If Helpful Reader knows more about the Boren Bicycle Co., I would like to know more. 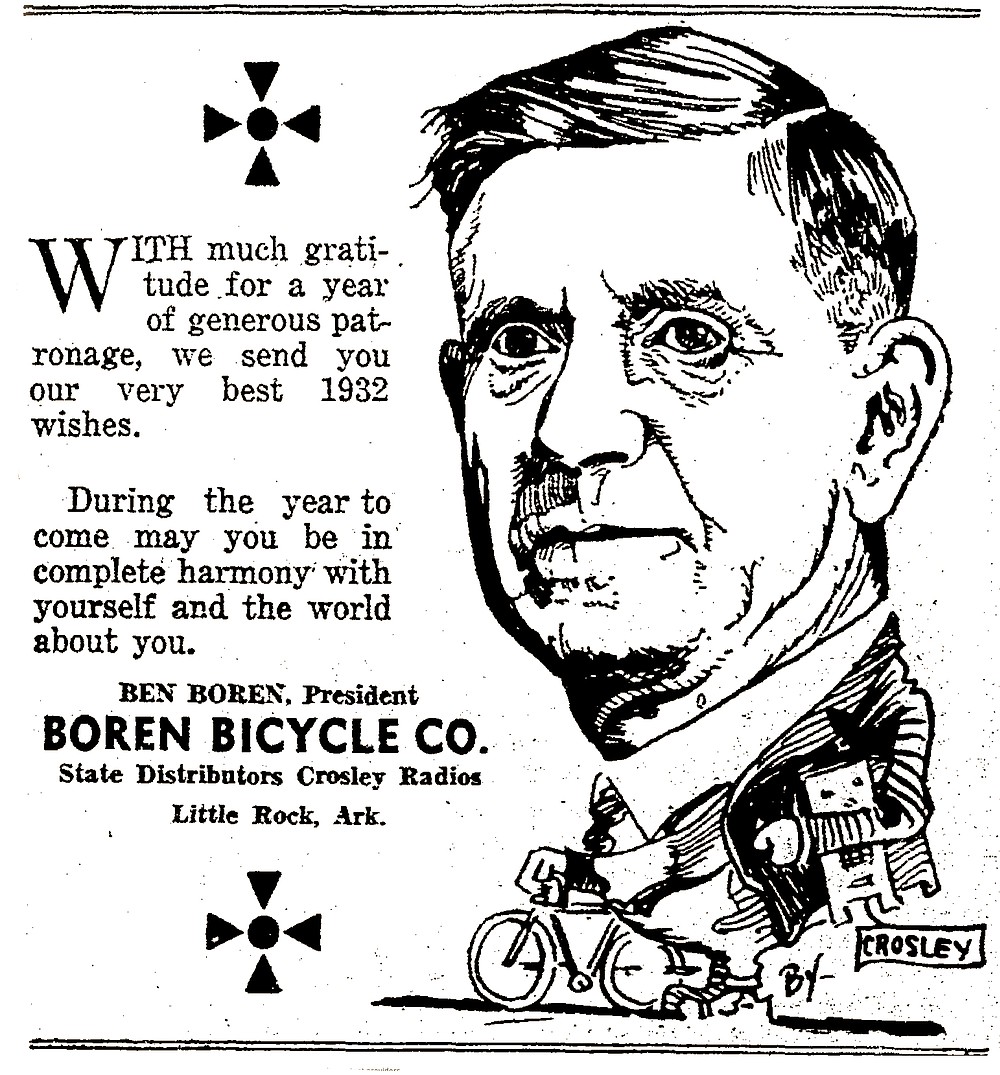