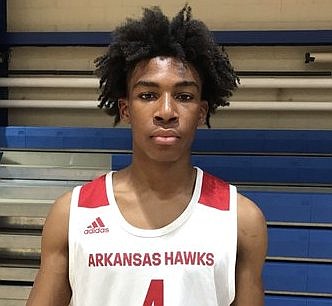 Episcopal Collegiate 2025 guard Kellen Robinson is playing up this spring and summer with the 15-under Arkansas Hawks, but he is fully capable, said Hawks founder Bill Ingram.

“He moves pretty good at an early age," Ingram said. "I’m positive he’ll be better than KK. I love him to death. Great IQ. He comes from a basketball family and loves the game. Always working hard.”

He scored 9 points, grabbed 3 rebounds and had 2 assists and 2 steals in the Hawks’ 74-62 loss to ATCEL on Friday during the Exposure Breakout event in the Atlanta. He had a weekend high of 15 points on Saturday in a 96-44 victory over EAB.

Robinson also had 7 rebounds, 5 steals and an assist.

His oldest brother, Kelvin, played at Appalachian State, Eastern Kentucky and Central Baptist College, and Khasen is a promising junior prospect at Bryant. He has a younger brother, Kollin.

Pick-up basketball at the Robinson home has been competitive.

“It’s fun, but it can be hard sometimes,” Robinson said. “Everybody's pushing you, especially when I was younger all my brothers were pushing me. Shoot, that’s how I got better.”

Robinson has soaked up knowledge from his more-experienced brothers.

“To play hard at all times,” he said of what he has learned. “You never know who’s watching. There could be a coach at the end of the stands and you never know he’s a coach.”

He’s thankful for the opportunity to be playing with the Hawks.

“I just want to play better teams get more exposure,” Robinson said, "and really work on my defense. That’s what my dad has been focused on.”