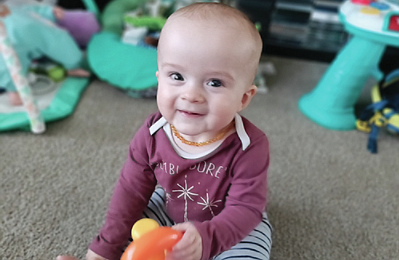 Ollie Hurst is the first child in Arkansas diagnosed with spinal muscular atrophy through a new statewide screening program for the rare genetic disorder. Early treatment for the condition, which is often fatal for children early in childhood, offers hope for kids like Ollie, who has responded well so far to the new medical advances. (Arkansas Democrat-Gazette/Stephen Swofford)

The news that changed the course of Ollie's life came from a doctor when he was just 9 days old.

It had been a blurry summer of protests and pandemic, and Ollie's mother, Elaine Hurst, had looked forward to the newborn "bubble." Their family also was regrouping after relocating from the West Coast to Vilonia in March.

"Obviously, my heart dropped immediately at that," Hurst said. "You don't want anything to be wrong with your kids."

Ollie is the first child in Arkansas to be diagnosed with spinal muscular atrophy -- a rare and often debilitating genetic disorder -- through a new statewide screening program for the condition.

His case and its treatment show the value of the screenings in an era when cutting-edge therapies can, for the first time, mitigate the most serious effects of some genetic diseases.

It also shows early returns for the 2019 state law that established the testing program. Spinal muscular atrophy isn't part of such testing panels in more than a dozen states, according to national advocacy groups.

Ollie is now "scooching backward and rolling over both ways and lifting his legs like a champ, which he would not be doing at this point if he had not had this treatment," she said.

Spinal muscular atrophy is a neuromuscular disease that affects about 1 in 10,000 live births. It's caused by problems with a gene that isn't making a protein to help keep nerve cells alive.

Without the protein, nerves start dying and the brain can't tell muscles to function. People with the most serious form of the disease -- including Ollie -- eventually lose the ability to breathe and eat on their own. Most die in early childhood.

"You can understand, hear, speak normally. But you're kind of trapped in a body which cannot move," said Dr. Kapil Arya, associate professor of pediatrics at University of Arkansas for Medical Sciences.

"It's a very heartbreaking disease, in that respect."

Recent scientific advances, however, have begun to make new inroads. They include a first-of-its-kind therapy that uses a deactivated virus shell, called a vector, to smuggle a working copy of the defective gene into young patients' bodies.

First approved in 2019, the treatment can't undo damage to nerves and muscles, but it can prevent further damage. That means there's only a short window for use since the condition it treats often doesn't show symptoms for months after birth.

Ollie was also the first child in the state to receive the gene therapy, which he began at less than a month old. He responded so well, Arya said, that a colleague who met Ollie asked if he really had spinal muscular atrophy.

"If he appears [to have], and has, such normal strength and development, that's so amazing and gratifying to see," said Arya, who is also medical director of the spinal muscular atrophy clinic at Arkansas Children's Hospital.

Hurst said the experience has been a trial: weekly blood draws from Ollie's small hand or foot, last year's overall circumstances and having to "be normal" for Ollie's 3-year-old brother, Paxton.

Because the treatment is so new, some questions remain about what Ollie's life will look like decades from now. The youngest patients who've received the same treatment are not even 10 years old, according to Hurst.

For now, her youngest son is thriving. Hurst said she's grateful for the testing that caught Ollie's condition, for the family's treatment team at Arkansas Children's Hospital and for God providing for their family.

"We were given so much hope, which is what really got us through it," Hurst said. "There aren't words for it, the thought of losing your child once you've just had them."

National advocates say they are still working to urge every state to start newborn screening for spinal muscular atrophy, as well as another genetic condition called Pompe disease.

While federal regulators recommend the screenings, the "patchwork" nature of public health programs -- largely administered by states -- stands in the way. Some states cite financial and logistical challenges in setting up screenings.

Treatment offers a "richer life," he said, so screenings are "a very simple way for a state to make such a huge difference in the lives of their constituents, and their children and families, to children with the disease and their loved ones."

The legislation's lead author, state Rep. Julie Mayberry, R-Hensley, said the law was inspired by the advocacy of a Conway family whose daughter was born with spinal muscular atrophy.

Without screening, Ollie's family "would be where all these other families have been before, with test after test and doctors saying 'I don't know' ... and just not really knowing what's wrong," she said.

"[If] we catch all children with this particular devastating disease early on in life, get the medicine early on in life and not see any of the bad consequences -- definitely, that would be the utopia," he said.