Trojans build lead, not able to hold it 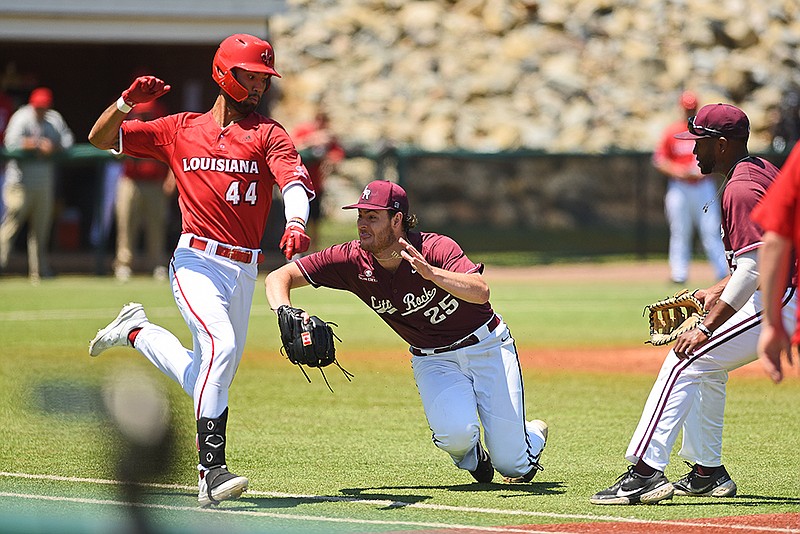 After Jack DeCooman allowed five runs over one inning in his last start at Arkansas State University on April 3, University of Arkansas at Little Rock Coach Chris Curry pulled the junior from the starting rotation for what Curry called a "mental breather."

The left-hander returned to the rotation Sunday and struck out four and allowed two runs aginst Louisiana-Lafayette. When he exited following the Trojans' three-run fourth inning due to a high pitch count, the lanky 6-5 lefty stood in line for his first win of the season with UALR up 4-2.

But the Trojans couldn't hold on.

The Ragin' Cajuns tagged UALR's bullpen for five runs, while Trojans hitters went 1 for 14 with runners in scoring position after taking the fourth-inning lead, and Louisiana-Lafayette ran away with a 7-4 win at Gary Hogan Field to avoid the weekend sweep and snap a six-game conference losing streak.

"Jack gave us the quality start we needed," Curry said. "But there were too many small mistakes on our part that cost us in an air-tight game like that. Louisiana got the big hits with runners on, and that's how the game went down."

The Trojans stranded 12 base runners as Louisiana-Lafayette feasted on UALR relievers Jacob Weatherley, Luke Wallner (0-1) and Aaron Barkley for runs in the sixth, seventh and ninth innings in the come-from-behind victory. Ragin' Cajuns designated hitter Ben Fitzgerald had three hits, including a towering ninth-inning home run, and left-hander Brandon Talley notched his fifth save of the season with 2 2/3 scoreless innings in relief of Dane Dixon (2-0).

Despite the loss, the Trojans (18-18, 9-6) maintain a one-game lead over Louisiana-Lafayette (22-17, 8-7) in the Sun Belt West Division after securing the series win in extra innings Saturday.

"We're disappointed right this second," Curry said. "But if you can win a series against a team that came in in first place, everything that we set out to accomplish early in the year is still ahead of us."

Dickerson made his defensive mark in the top of the third, catching Louisiana-Lafayette's Jonathan Brandon stretching a single into a double with a strike from right field.

The Trojans regained the lead with a two-out rally in the bottom of the fourth. Dickerson walked and Barnum singled to set the table for Jake Wright, and the sophomore lined a single to center field to score Dickerson. Shortstop Eldrige Figueroa followed with a double off the right-field wall to plate Barnum and Wright to give the Trojans a 4-2 lead.

Weatherly replaced DeCooman and the Ragin' Cajuns cut the score to 4-3 on Kimple's RBI triple in the sixth. Drake Osborn's seventh-inning double brought home Carson Roccaforte to tie the score, and Louisiana-Lafayette took a 5-4 lead on Fitzgerald's double that chased Wallner.

UALR's offense disappeared after the fourth inning, and the Trojans had only one hit with runners in scoring position over the final five innings. UALR put a runner on second base in the fifth, sixth, seventh and eighth innings, but each time failed to take advantage.

"The offense didn't score after the fourth," Curry said. "We had plenty of chances. I don't hang this one on the bullpen at all."