Forecasters: Up to 3 more inches of rain expected in Northwest Arkansas 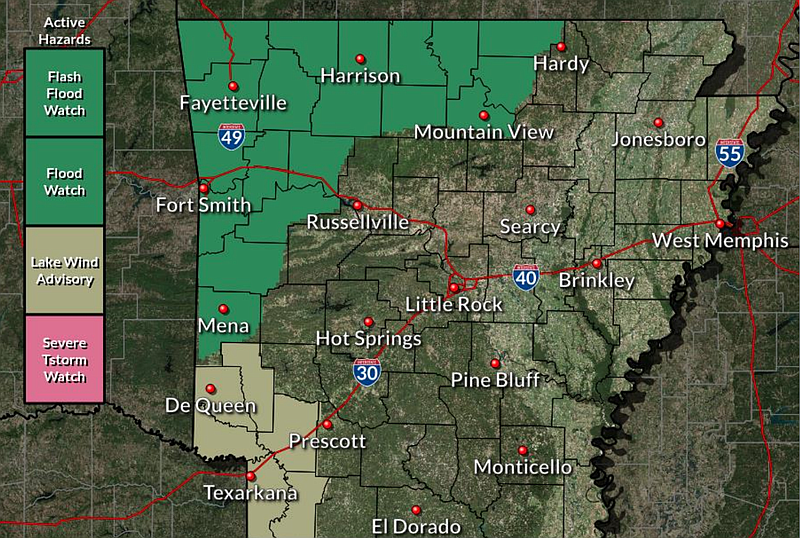 A slow moving storm system is expected to continue into Friday, according to a Wednesday afternoon briefing from the National Weather Service.

Up to six inches of rain is estimated to have already fallen in extreme Northwest Arkansas, while other areas saw as much as three inches, the weather service reported.

Over the next 24 hours, up to three additional inches of rain is expected for many parts of Northwest Arkansas, which can cause flash flooding in areas already experiencing bankfull conditions, the briefing states.

A chance for severe isolated thunderstorms is possible Wednesday afternoon, forecasters said, while the primary threat is strong wind gusts.

At least two school buses became trapped in water in Northwest Arkansas on Wednesday morning, officials said, as forecasters predicted up to an additional four inches of rain over the region through Thursday.

Springdale Fire Chief Ron Skelton said the department was called to the area of 5014 Kelly Road at 7:43 a.m. to assist with a school bus that had become trapped. Skelton said he did not know how many students were on the bus at the time, but said everyone was transported from the scene in a single Chevrolet Tahoe.

In Bentonville, a bus slid into a ditch and into water on Battlefield Road near Central Avenue, said Leslee Wright, a spokeswoman for the Bentonville School District. She said one student was on the bus, but neither the student nor the driver was injured, and the student was transported to school.

According to Skelton, another school bus was stopped in a neighborhood in the area of King Arthur Road and Ball Road when the driver was unable to find a way out of the neighborhood that was not flooded.

Keith Foster, a Rogers Police Department spokesman, said he didn’t have a list of closed roads, but said that there were many. He said firefighters had responded to many swift water rescues.

Kelly Cantrell of the Washington county sheriff’s office said the agency had received nine weather-related calls beginning around 7:30 a.m., including the call to King Arthur Road.

The other calls were reporting roads closed due to flooding or because of fallen trees blocking the roads, Cantrell said.

[Video not showing up above? Click here to watch » https://www.youtube.com/watch?v=twMJb-h-ajk]

The National Weather Service office in Tulsa said the storm system that began moving through Northwest Arkansas on Tuesday night had dropped from 1 to 3 inches of rain across most of the area by mid-morning Wednesday, with rainfall of 4 to 6 inches being reported in some areas.

Joe Sellers, meteorologist with the weather service, said the forecast calls for another 2 to 4 inches of rain in the region before the system moves out of the area Thursday morning.

A weather briefing from McGowen sent after 10 a.m. Wednesday said, in addition to flooding concerns, there is a potential for additional severe weather over Northwest Arkansas into Wednesday night with a cold front approaching and moving into the region. The greater severe threat looks to be along and south of Interstate 44 in eastern Oklahoma and across Northwest Arkansas with damaging wind, large hail and also a tornado threat possible, according to the brief.

She encouraged people to stay off flooded roadways.

“It doesn’t take much water to wash away a vehicle,” Jenkins said. “Inches of water can sweep one away.”

Threats of flooding and tornadoes began early Wednesday in Northwest Arkansas, according to forecasters.

Potential severe storms and floods will remain a threat into Thursday, according to the National Weather Service.

Several roads in Benton County are impassable because of heavy rain, a news release from the county states.

The city of Rogers has recommended that residents avoid driving because of the flooding, according to a city news release.

"Rogers first responders have already responded to dozens of water rescues. We continue to respond to calls for water rescue from stalled motorists in nearly all parts of the city," the release states. "We encourage residents who have made it away from home to proceed with extreme caution when returning home as road conditions may have worsened since you left home this morning."

A tornado was spotted in Benton County Wednesday morning, according to forecasters.

A tornado watch issued for much of Northwest Arkansas through 10 a.m. was expanded to include Carroll and Madison counties.

Benton and Washington counties could see a tornado Wednesday as storms with heavy showers move through Northwest Arkansas, forecasters say.

The counties are under a tornado watch until 10 a.m. Wednesday and a flood watch through 7 a.m. Thursday morning, according to the National Weather Service.

Parts of the region could see over three and a half inches of rain through Friday morning.

A tornado warning was briefly issued and then cancelled for part of Washington County that included Lincoln and Prairie Grove around 6:30 a.m. Wednesday.

A high temperature of 73 and a low of 61 is predicted for Wednesday in Fayetteville, according to the service.

[Severe Weather Awareness Quiz not showing up above? Click here to test your knowledge » arkansasonline.com/aware/]

This story has been updated. It was originally published at 8:38 a.m.