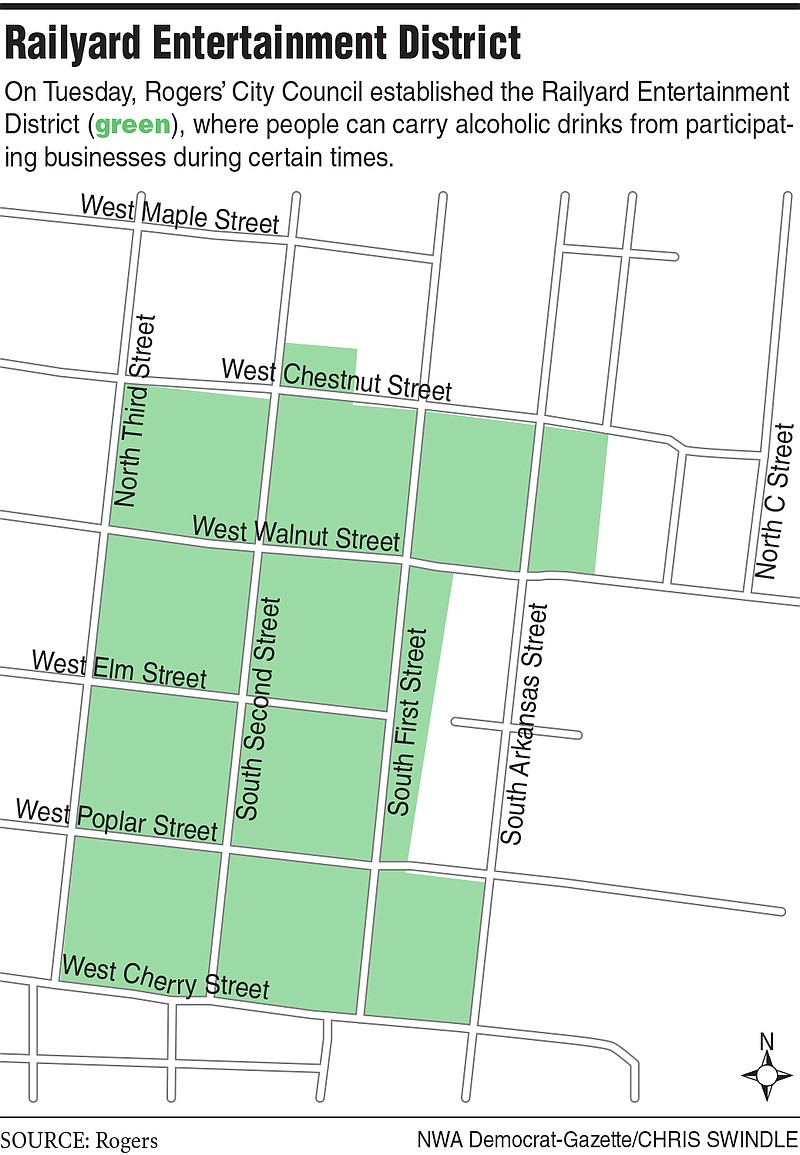 ROGERS -- The City Council on Tuesday approved allowing people to carry an alcoholic beverage in a section of the downtown area.

The ordinance establishes what will be known as The Railyard Entertainment District, covering several blocks from Chestnut Street south to Cherry Street and from Third Street east to Arkansas Street.

John McCurdy, the city's director of development, told the council's Community Services Committee the city received input from downtown merchants and the Rogers-Lowell Area Chamber of Commerce, along with the city's Legal and Police departments, in developing the ordinance.

"It's not an effort to open up a party space in Rogers," McCurdy told the committee, which met right before Tuesday's council meeting.

McCurdy said the ordinance is based on lessons learned from other cities. He said people within the district can grab a drink and food and go sit and eat in one of the public spaces.

"You can't bring your own alcohol into the district," he said. "They have to purchase the alcohol from a participating business in the district."

Business participation in the district is optional, so people cannot walk into a business with a cup of alcohol if the owner does not allow it, he said. People may not leave the district while carrying an alcoholic beverage.

The ordinance doesn't nullify any laws such as public intoxication or disorderly conduct. He said the law carves out some public spaces where people aren't breaking the law, he said.

The three committee members voted in favor of the ordinance and recommended the council approve it.

Julie Loose, who said she owned a business downtown, said she didn't feel the district needs to be seven days a week. She recommended it begin only on weekends. She requested the council table the measure because she believed most people didn't have enough knowledge about the ordinance.

Police Chief Hayes Minor said there'll be a period of education with the ordinance but added at some point police may have to issue a citation for anyone violating the ordinance.

The council approved the ordinance, 7-1, and then the emergency clause by the same vote.

The meeting was Minor's last one as police chief. He's retiring Friday.

Mayor Greg Hines gave each council member a moment to address Minor at the end of the meeting.

"Chief, they have pretty well covered everything," Kruger said. "I have personally expressed my feelings to you, and I know you would like to get out of this meeting. I will say once again great job and we appreciate you, and I move for adjournment."

Restaurants, bars and breweries within the Railyard Entertainment District, as well as vendors at special events within District boundaries, may serve alcoholic beverages that may be carried out of the establishment and consumed within the district from 4 to 10 p.m. Monday through Friday, and 10 a.m. to 10 p.m. Saturday and Sunday, according to the ordinance. The drink must be in a designated district cup, and the cup can’t exceed 16 ounces and will be provided by a participating business within the district, according to the ordinance.

CORRECTION: Sherri Holliday-Sklar did not speak on the proposed Rogers downtown entertainment district ordinance at Tuesday night’s City Council meeting. Comments on the ordinance were erroneously attributed to her in this article.