No snap choice: Franks, other Hogs likely in for wait 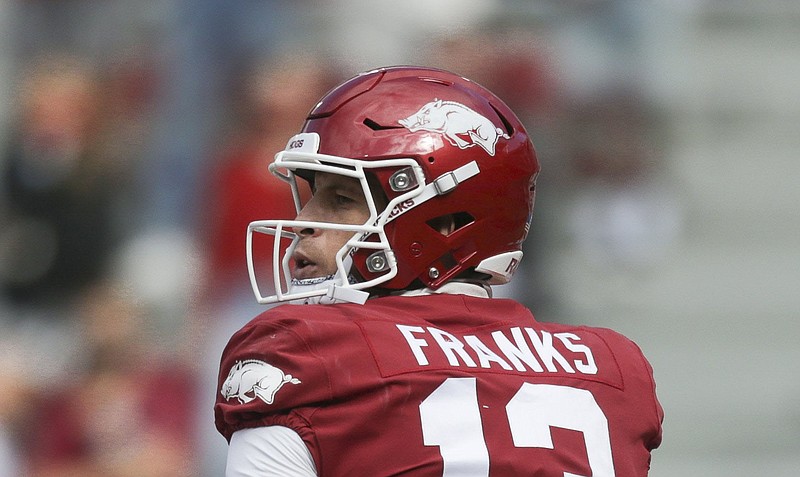 Feleipe Franks passed for 2,107 yards with 17 touchdowns and 4 interceptions in his only 9 games as Arkansas’ quarterback last season after transferring from Florida. Franks likely will not be chosen until the later rounds of the NFL Draft, which begins tonight in Cleveland. (NWA Democrat-Gazette/Charlie Kaijo)

FAYETTEVILLE -- Top NFL Draft experts do not link former University of Arkansas standout Feleipe Franks among the top tier of quarterbacks available for the seven-round draft, which starts with the first round tonight in Cleveland.

He's apparently not in the next wave, either.

The oddsmakers at sportsbettingdime.com ranked the odds for the sixth quarterback taken in the draft in this order: Stanford's Davis Mills, Florida's Kyle Trask, Texas A&M's Kellen Mond and Georgia's Jamie Newman.

Franks' draft prospects might not compare with those other signal callers, but there are analytics that suggest his performance in 2020 was on par, and sometimes better, than many of those players.

Arkansas has a streak of 25 consecutive drafts with at least one player taken. It began in 1996 with linebacker Steve Conley going to Pittsburgh in the third round and defensive tackle Junior Soli -- father of current Razorbacks defensive end Mataio Soli -- going to San Diego in the fifth round.

Franks, Boyd and Marshall are all generally projected as third-day prospects, when rounds four through seven will take place Saturday.

Defensive tackle Xavier Kelly and cornerback Jerry Jacobs also participated in the Razorbacks' scaled-down pro day March 10 and hope to be drafted or wind up in an NFL camp.

Franks stands out as an intriguing possibility whose statistics for an Arkansas offense rebounding from a pair of abysmal seasons were commendable. He broke Kevin Scanlon's school single-season pass completion record with a 68.5% rate, and his 17-4 touchdown-to-interception ratio was the best for the Razorbacks in years.

Franks passed for 2,107 yards in nine games and completed 163 of 238 passes while leading Arkansas to three wins against an All-SEC schedule. This came after he rehabbed a broken ankle suffered in September 2019 while playing at Florida.

An analytics outfit called Sports Info Solutions (SIS) ranked Franks second in the draft class in on-target throws made in 2019 (when Franks played in the first four games for Florida) and 2020.

In a more in-depth calculation that included expected on-target percentage to help even out the analytics for deeper passers vs. check-down artists, Franks ranked third behind Trask, his successor at Florida, and Jones.

Franks' arm strength has never been in question. He has the longest throw ever charted by Pro Football Focus, his Hail Mary heave to Tyrie Cleveland for a 63-yard touchdown that traveled 67 yards in the air on the last play of Florida's 26-20 win over Tennessee in 2017.

His precision on deep passes created 12 passes of 47-plus yards, including five touchdowns, for the Razorbacks in 2020.

Franks had an option to return to Arkansas for a super senior season due to the coronavirus exception granted by the NCAA, but he chose to declare for the draft and got instruction from quarterback coach Steve Clarkson in California this winter.

"It's always been my dream to play in the NFL," Franks said. "To go be a starting quarterback and win championships in the NFL. I felt like I was completely ready for that mentally and physically."

Franks said footwork was one of his main areas of focus during the winter.

"Just being able to make things time up with the concept and routes," he said. "Just being able to get away to go out to California for a couple of months was pretty cool. Lots of people would like to do that, but at the same time it was a business trip, so just being about going out there and getting the work in helped me excel in my craft."

"Hearing his coaches talk about him at Arkansas and the coaches from Florida, they rave about him as a kid," Orlovsky said. "Like you're getting a really, really good person. A guy that's a really good worker and a really good leader.

"I think with Feleipe, the physical boxes are just off the charts. Big, big, strong arm, athletic, powerful, subtle movement. Like a lot of those things are intriguing.

"But then you go down this path of the 'but whys.' Arkansas' offense, it's like, 'Let's play as fast as we can, get as many snaps as we can' and it's just RPOs. There's not a ton of quarterbacking. It's more point guard playing, so to speak.

"Would Feleipe Franks, if he'd never gotten hurt, be Kyle Trask? Would he have had that kind of performance at Florida? I don't think it's outrageous to say that. So I think there are going to be a lot of teams that are intrigued."

ESPN's Chris Mortensen gives Franks a Day 3 grade. Mortensen also said he had an NFL personnel guy tell him he wished he'd seen Franks in the Dan Mullen offense with the talent at Florida surrounding him.

Franks is rated the No. 10 quarterback available in the draft by CBSSports.com and The Sporting News.

NFL.com's Lance Zierlein wrote, "Franks isn't missing the traits, arm talent or ability, but he needs to become a more decisive, rhythmic passer who can take advantage of what the coverage is giving him.

"His tendency to stare down targets allows safeties to become way too involved against him. He operates with solid mechanics, though. He has pro-caliber arm strength and buttery touch on his deep throws."

The Draft Network rated Franks the 281st best player available in the draft. ESPN's Todd McShay had him No. 239.

Boyd is an interesting prospect, based on his 1,133 rushing yards and 8 touchdowns in 2019 as a workhorse for a low-production offense. He returned last season and battled injuries, covid-19 issues from his roommate and playing time lost to Trelon Smith while managing just 309 rushing yards and three touchdowns. After averaging more than 6.0 yards per carry in 2018 and 2019, he dropped to 3.8 yards per carry last season.

Boyd, an offensive captain, opted out of the rest of the 2020 season with two games remaining.

Wrote Zierlein, "Boyd is more slasher than creator and is at his best when the running track is clearly defined and not overly congested. He has adequate vision as an inside and outside runner, but tends to take on big contact from hitters due to his upright running style and lack of elusiveness.

"He is a good athlete with adequate traits to help him compete for a roster spot, but he'll need to become much scrappier as a runner and in pass protection to give himself the best possible shot."

CBSSports projected Boyd as a seventh-round pick to the Washington Football Team.

The Draft Network rated Boyd as the 238th best prospect in the draft, and McShay had him at No. 228.

CBSSports.com ranks Marshall as the No. 19 defensive lineman available, and projects him to the Buffalo Bills in the sixth round.

The Draft Network ranked Marshall as the 249th best player available in the draft, and McShay had him at No. 243. 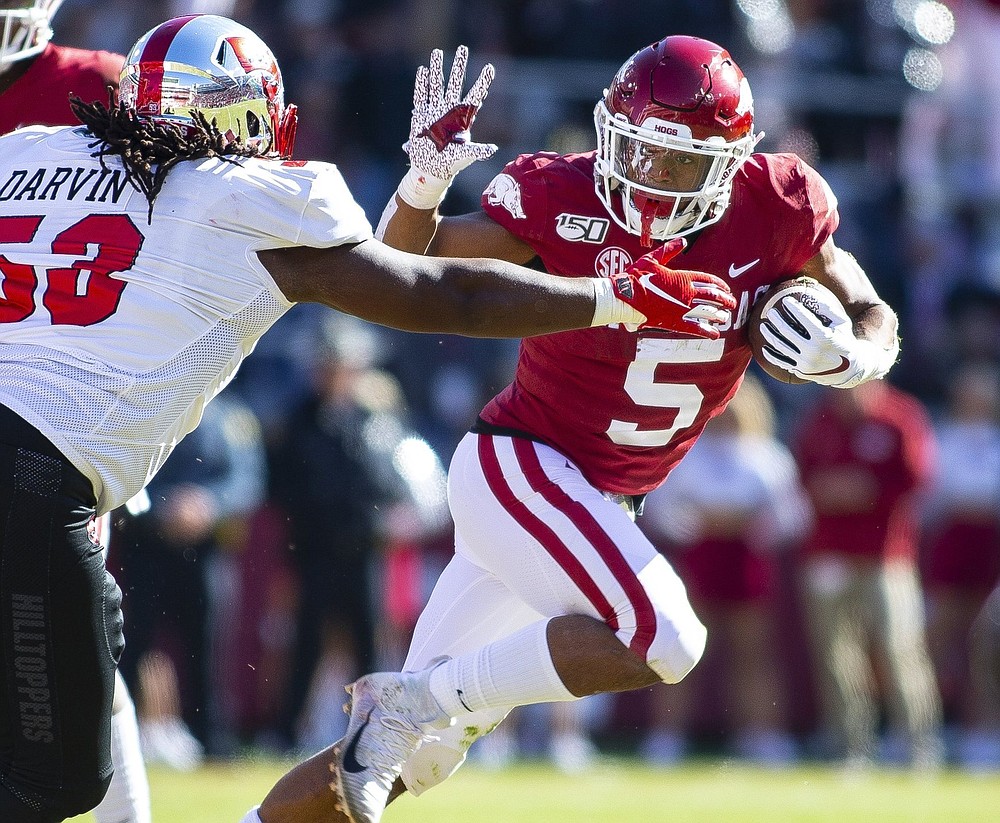 Running back Rakeem Boyd (5) averaged 6.0 yards per carry for Arkansas in 2018 and 2019, but he dropped to 3.8 ypc last season before opting out with two games remaining. CBSSports projects him as a seventh-round draft pick. (Special to the NWA Democrat-Gazette/David Beach)
ADVERTISEMENT