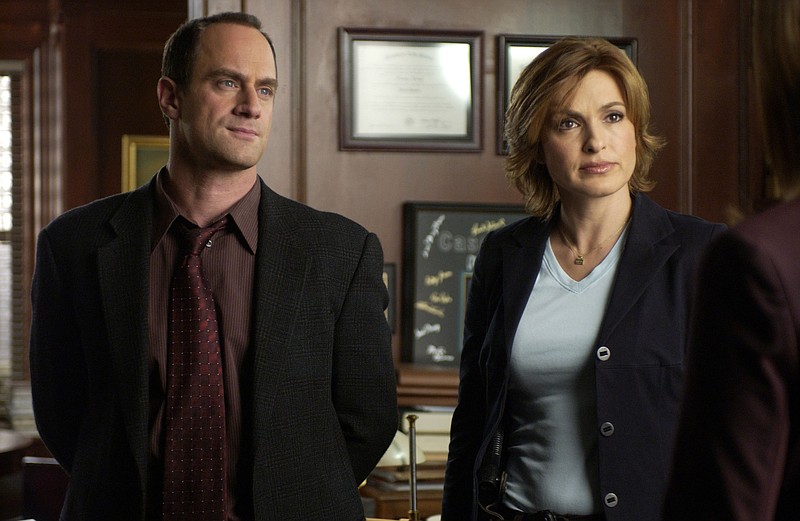 Christopher Meloni and Mariska Hargitay were a lot younger in this 2005 file photo. Meloni is back on TV with a new “Law & Order” series, “Organized Crime.” (NBC Universal/Barbara Nitke)

You have questions. I have some answers.

Q: I wonder if you would be able to explain why Chris Meloni left "Law & Order: SVU" many years ago. I love that show and am happy that he is back in "Law & Order: Organized Crime."

A: Fans were astonished when Meloni, who had played detective Elliot Stabler, left the long-running drama in 2011. Different theories have been offered for his departure, including that money issues during contract negotiations played a role.

Meloni, meanwhile, told the New York Post in 2020 that his departure "had nothing to do with the 'Law & Order' people, the 'SVU' people or with Dick Wolf," referring to the maestro of "Law & Order" shows. "I left with zero animosity, but I did leave clearly and open-eyed in going forward and finding new adventures," Meloni added. "I was like, 'That's what I want to do, keep moving forward.' I had done the 'Law & Order' way of storytelling, which they do really well, and I was interested in telling stories from a different angle -- whether comedic or inhabiting a new world or doing it on different platforms."

He has certainly tried out an array of roles on TV and in movies since then, and even "Organized Crime" is different in tone and style from other programs with the "Law & Order" brand.

Q: Being a big fan of "Blue Bloods," I am wondering what happened to Frank's grandson. I thought he was going to be a big part of the show.

A: Joe Hill, played by Will Hochman, will return. He is in the CBS drama's last two episodes of the season, which will air back-to-back on May 14. And the network has renewed "Blue Bloods" for its 12th season this fall.

Q: Recently one of my local TV stations featured a Western called "Guns of Paradise." The male lead was an actor named Lee Horsley. He looked very familiar, but I have been unable to find anyone who remembers other roles he played. Is he still acting or retired?

A: Tall Texan Lee Horsley, now in his mid-60s, has still shown up on-screen from time to time; writer-director Quentin Tarantino included Horsley in "The Hateful Eight" and "Django Unchained." But his screen-acting heyday was in the '80s and '90s, where his TV series included "Nero Wolfe," "Matt Houston," "Bodies of Evidence," "Hawkeye" and "Paradise" (later known as "Guns of Paradise"). You might also have seen him in miniseries such as "North and South Book II" and "Crossings," as well as several TV movies and the big-screen adventure "The Sword and the Sorcerer."

Q: I was a huge fan of the TV series "Monk" with Tony Shalhoub. I think I have seen every episode about 50 times. About a month ago a friend said they were going to make a made-for-TV movie with Shalhoub reprising his role. I am wondering if the rumor is true.

A: There was talk about 10 years ago about a TV-movie reunion of the 2002-2009 series, but it did not happen, reportedly because of budgetary concerns. In May 2020, Shalhoub did play Adrian Monk again in a short pandemic-themed piece for Peacock's "At-Home Variety Show." It also featured "Monk" co-stars Ted Levine, Traylor Howard and Jason Gray-Stanford, as well as a closing note where Shalhoub says he and his wife, Brooke Adams, had both had covid-19. You can still find the piece, titled "Mr. Monk Shelters in Place," on Peacock with the "At-Home Variety Show" listing.

Q: I really like "The Closer" and "Major Crimes" and have enjoyed watching the reruns on Lifetime. I know the main characters left or died, but do you think there is any way they might find another "Chief"? I really like all of the other actors on the show.

A: As fans of the shows know, "The Closer" on TNT starred Kyra Sedgwick as the leader of a Los Angeles Police Department homicide unit. When Sedgwick left, the show was renamed "Major Crimes" and Mary McDonnell took the lead. That show had a nice run as well on TNT. Even when McDonnell's character was killed off, it felt as if the series could have kept going. But I checked with someone close to the show about that possibility and was told simply that TNT "wanted us gone."

Q: The Hallmark Channel has two lead actors, Ryan Paevey and Luke Macfarlane, who look very much alike. Can you tell me if they are related?

(Do you have a question or comment about entertainment past, present and future? Write to Rich Heldenfels, P.O. Box 417, Mogadore, OH 44260, or brenfels@gmail.com. Letters may be edited. Individual replies are not guaranteed.)