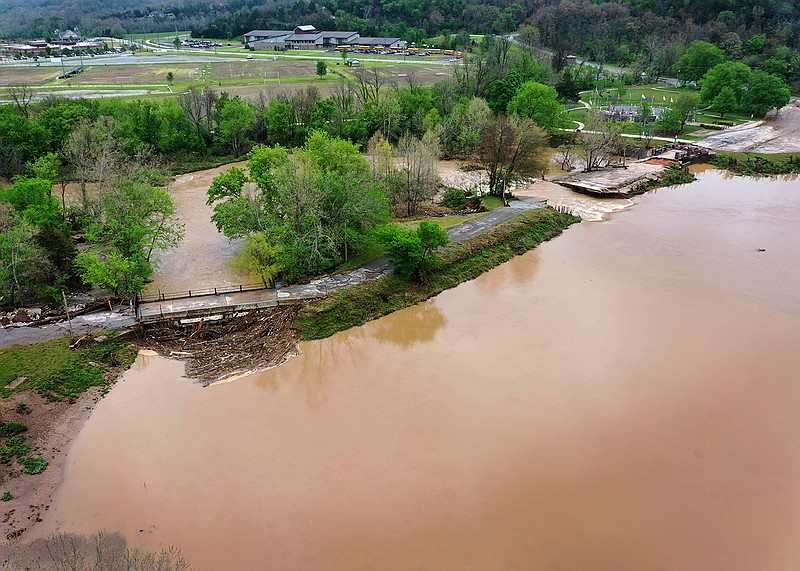 A section of the dam that creates Lake Bella Vista was washed away in Wednesday’s storms. The break is in a section between two concrete overflows. The main dam gate and overflows became blocked by debris, authorities said. (NWA Democrat-Gazette/Spencer Tirey)

Heavy rain over the past few days led to flash floods around Arkansas Thursday, as rising water trapped people inside homes and vehicles while counties looked to the state for disaster assistance.

Three counties, Johnson, Crawford and Franklin, have declared disaster emergency proclamations as a result of Thursday morning's flooding, according to the Arkansas Division of Emergency Management.

Around the state, flooding washed out bridges and roads, while swift water rescue teams responded to calls for people trapped in their homes or vehicles.

In Johnson County, flood waters damaged bridges and water deluged roads throughout the county. First responders rescued two people trapped in their homes on separate calls and another person stuck in a car on a flooded road, Johnson County Judge Herman Houston said.

"We haven't had a situation like this in several years," Houston said. "This is the worst flood that I can probably remember in, I don't know, maybe 30 years or more."

[Video not showing up above? Click here to watch » https://www.youtube.com/watch?v=ofjY-346Y4I]

Houston estimates the floods may have caused around $100,000 worth of damage in Johnson County with some roads that were still impassable Thursday afternoon.

While most of the flash floods came early Thursday, a flash flood warning was in effect until Thursday afternoon in Johnson, Pope and Van Buren counties, according to the National Weather Service.

The flash floods were caused by extensive rains in the northwest and northern parts of the state. In 24 hours, 6 inches of rain fell on parts of Northwest Arkansas, causing rivers and creeks to overflow, according to the National Weather Service.

Officials in Benton and Washington counties spent Thursday cleaning up debris after the Wednesday flooding.

The most significant damage occurred at the Lake Bella Vista dam in Bentonville where a new area of the dam was washed out, suffering a "failure" approximately 50-feet wide, according to a city news release.

The dam had first been damaged in 2008 by flooding and has suffered additional damage since.

Flooding was particularly extensive along the Spring River, with some flood damage at Riverbend Park, according to Sharp County Judge Gene Moore.

In total, 10 counties have reported some flood damage, according to a spokeswoman at the Arkansas Division of Emergency Management.

Floods could continue throughout the state through the weekend, as the National Weather Service forecasts that the Arkansas River will flood over the next few days.

A flood warning at Ozark Lock and Dam, affecting Logan, Franklin and Johnson counties, was also issued by the Weather Service Thursday.

"For the Arkansas River to go on and flood, you usually have to have pretty, pretty substantial rainfall to be here within a short amount of time or over an elongated period of time," said Erik Green, a meteorologist with the National Weather Service in North Little Rock.

Flooding in Central Arkansas, typically, lags behind the western portions of the state, as rain from the west drains into the river as it flows south.

The National Weather Service forecasts flooding in Little Rock on Sunday and at Pendleton in Desha County on Monday to reach the "action stage" meaning workers may need to do work in "preparation for possible significant hydrologic activity."

Other parts of the Arkansas River, including Pine Bluff, Dardanelle, Morrilton and Toad Suck, could see minor flooding, according to the National Weather Service.

The flooding of the Arkansas River that forecasters project this weekend will not be anything near the levels the river reached during the floods of 2019, but "we'll still see a less than ordinary rise along the river," Green said.

Because of flooding concerns, the U.S. Army Corps of Engineers issued a "small craft advisory" for boats on the Arkansas River.

Information for this article was contributed by Mike Jones and Tom Sissom of the Northwest Arkansas Democrat-Gazette. 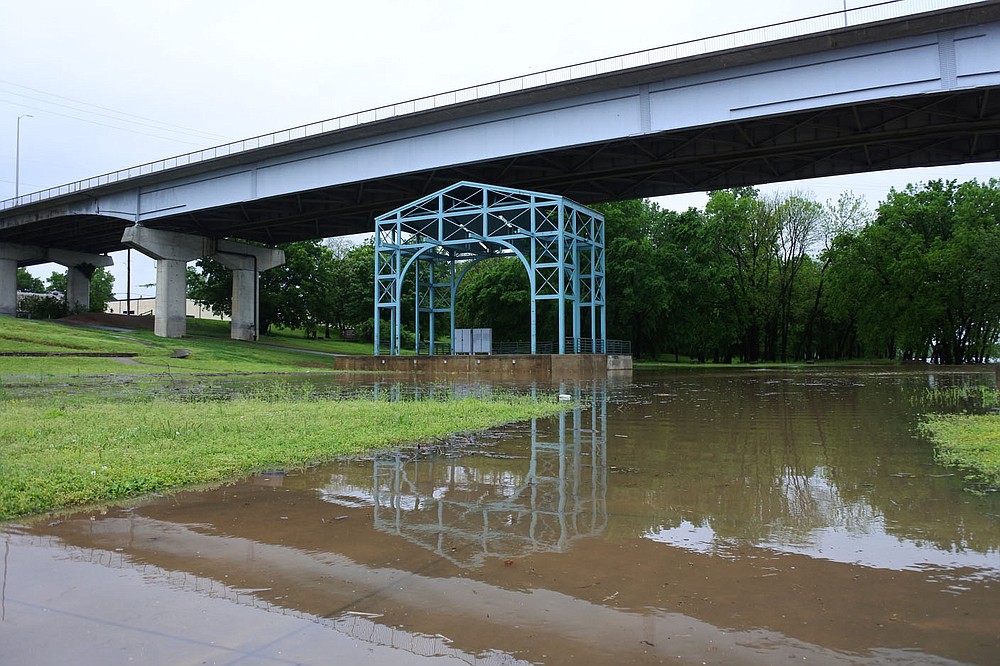 The stage of the Riverfront Amphitheater next to the Arkansas River in Fort Smith is surrounded by water after heavy rainfall Thursday. (NWA Democrat-Gazette/Thomas Saccente) 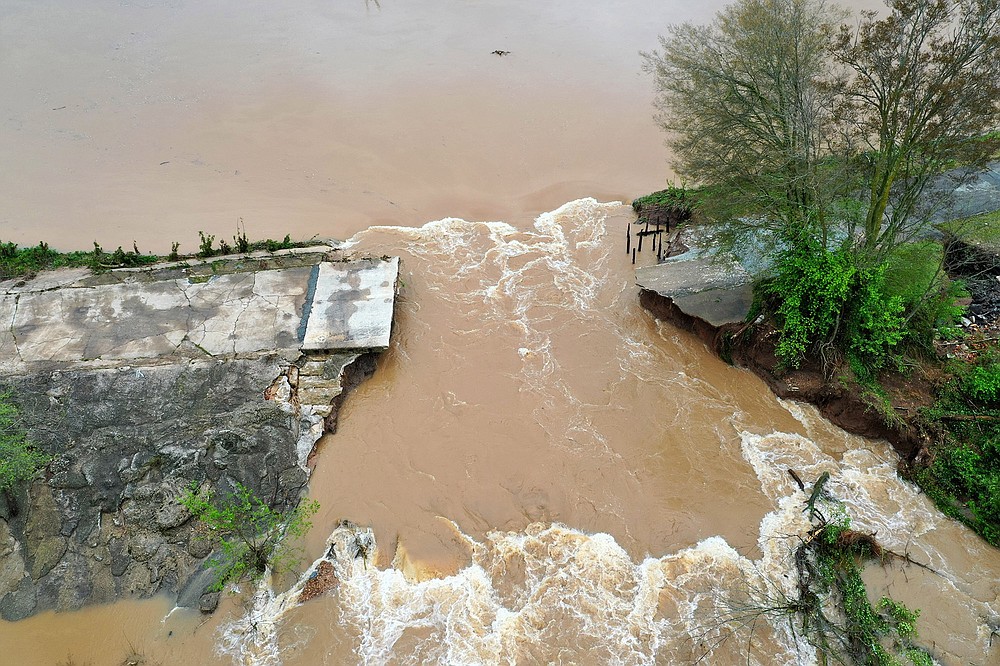 A section of the dam that creates Lake Bella Vista was washed away from Wednesday’s storms. The main dam gate and overflows became blocked by debris created during the storm. (NWA Democrat-Gazette/Spencer Tirey) 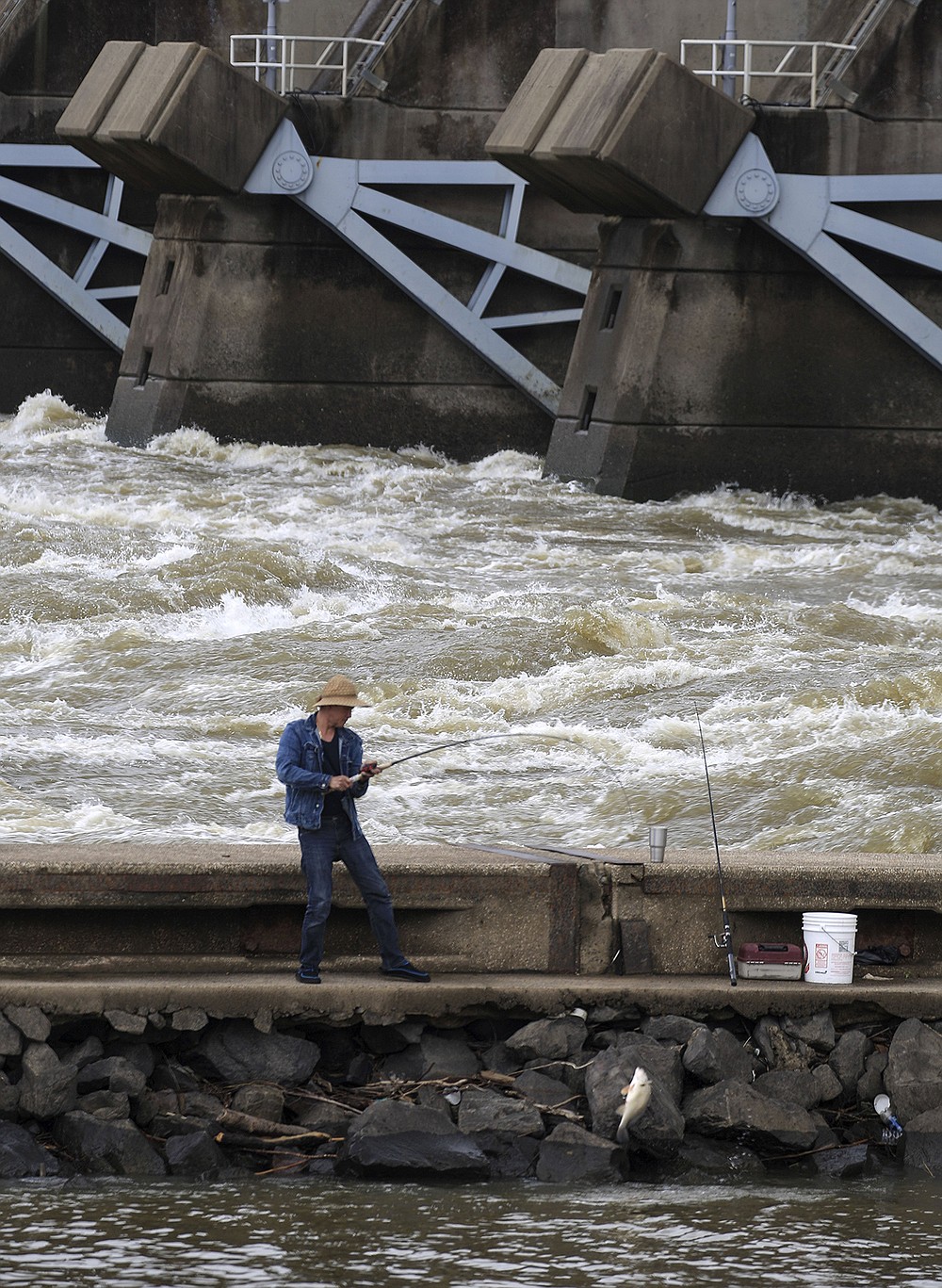 Water rushes through the gates at Murray Lock and Dam on Thursday as a fisherman lands a fish at Cook’s Landing in North Little Rock. The U.S. Army Corps of Engineers Little Rock District issued a small-craft advisory for the McClellan-Kerr Arkansas River Navigation System in Arkansas. Rainfall in eastern Oklahoma and western Arkansas is raising water flows. Small-craft advisories are issued when flows exceed 70,000 cubic feet per second. (Arkansas Democrat-Gazette/Staton Breidenthal) 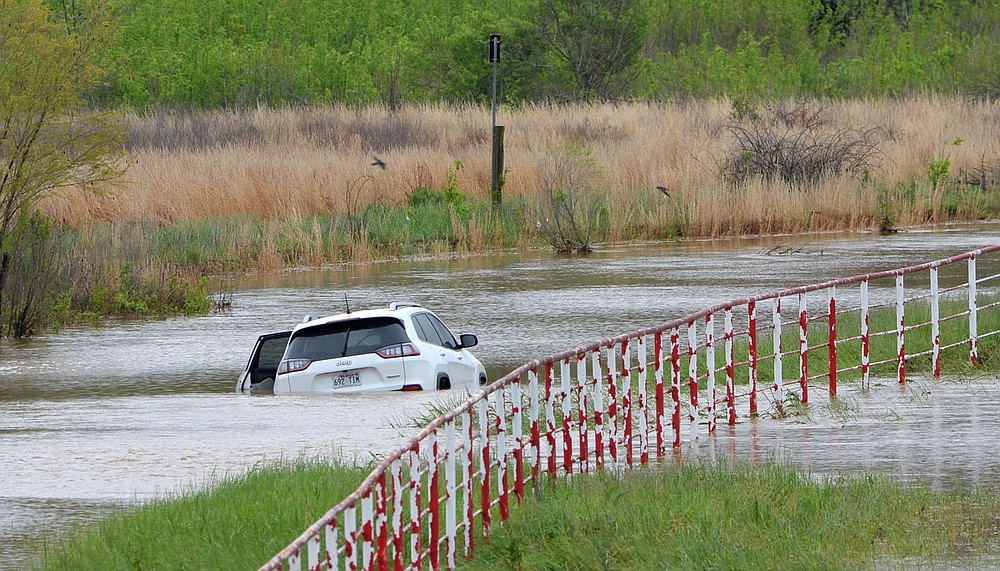 A car sits abandoned Thursday in deep water along Dead Horse Mountain Road in Fayetteville. Heavy rain over Wednesday and Thursday have swollen the White River outside of its banks, causing the road to flood. (NWA Democrat-Gazette/Andy Shupe)