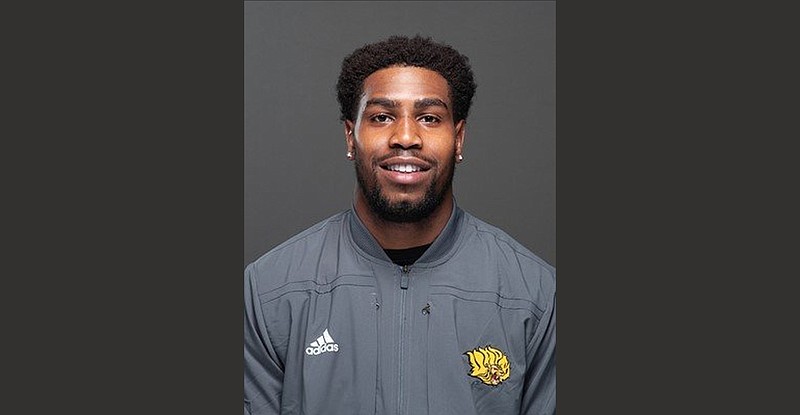 When Jeremy Brown finished his redshirt season at the University of Arkansas at Pine Bluff, the Golden Lions hardly had nowhere to go but up.

One of three remaining players who endured a 1-10 season in 2016, Brown used that experience to build toward future success.

“I had just seen how the guys competed, how people turned out and everyone reacted,” Brown said. “There wasn’t too much winning.” Coming from Ruston, Louisiana, the backyard of Louisiana Tech University, Brown arrived in Pine Bluff with wide receivers Tyrin Ralph and Christopher Robinson with aspirations of helping spark a turnaround.

All three are just one win away from a conference championship.

“Just believing and praying that you have a chance to win every game to get to the championship,” Brown said. “That’s just how I am. I wanted to give it all for my teammates and win the championship together.” Those goals have been reached — with the exception of a Southwestern Athletic Conference title. The five-year ascent Brown has ridden under three head coaches — Monte Coleman, Cedric Thomas and Doc Gamble — could culminate today in a crown UAPB (4-0 overall and SWAC) has waited 8½ years to take back.

Brown and 14 other seniors (in football eligibility) can remember the pitfall of back-to-back 2-9 records in 2017 and 2018, as well as the desire to return the Golden Lions back to prominence.

“First off, [UAPB] was the only school that offered me a full scholarship,” senior linebacker Kolby Watts said. “Second of all, I’m blessed to play anywhere. Football isn’t promised to play anywhere after high school. Go out and play every play like it’s my last. Football will not be here forever.” Brown made his mark, even during those lean years.

His first two touchdowns came against Southern University in 2017, and he more than doubled his single-season catches with 30 the next year, due in part to a seven-catch, 100-yard outing against Prairie View A&M.

Early in the 2019 season, Brown caught a touchdown pass in three straight games. Perhaps the highlight of his career was a 17-yard haul on the final play against Tennessee State, securing a 37-31 win that gave the Golden Lions a 3-1 start at the time, en route to a 6-5 finish.

Brown had 14 catches for 228 yards before missing the last four games due to injury. Although he earned a bachelor’s degree in industrial technology and tasted a long-awaited winning record, the bonus 2021 season could not come soon enough.

“It was time to win,” said Brown, now chasing a master’s degree in business management. “We got together the pieces. We brought in more guys. Everything’s starting to come together. That’s what sparked this now.” Ralph has been a huge catalyst for change. The return specialist was named first-team All-SWAC and hailed as BOXTOROW National Special Teams Player of the Year on Thursday.

Brown was given BOXTOROW Honorable Mention All-America and second-team All-SWAC status with 81 yards and two touchdowns on six passes through four games. Both of his touchdowns came at Grambling State, just 5 miles west of Ruston.

One day soon, Brown could go into his father’s construction business. His education could be accented with a conference title, a goal that seemed far away from the valley of a one-win redshirt year.

“Everybody’s focused,” Brown said. “I won’t have nerves. I don’t know about the other guys, but everybody should be ready to go.”