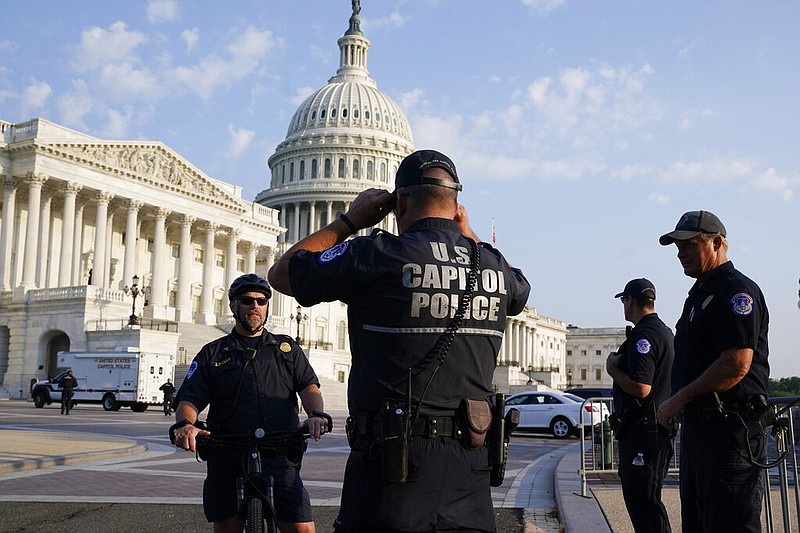 WASHINGTON -- Americans detained for their role in the Jan. 6 attack on the U.S. Capitol aren't "political prisoners" as some of his colleagues are claiming, U.S. Rep. Rick Crawford, R-Ark., said last week.

At the first meeting of the select Jan. 6 committee Tuesday, members heard from some of the more than 140 officers who were wounded while helping to defend the Capitol.

One, D.C. police officer Michael Fanone, said he suffered a heart attack and a traumatic brain injury when the mob turned on him.

Another, U.S. Capitol Police Sgt. Aquilino Gonell, said he would need surgery on his left shoulder because of his injuries. Bone fusion surgery on his right foot has already been completed, he said.

A third, D.C. police officer Daniel Hodges, described being crushed in a doorway and beaten by supporters of then-President Donald Trump. One of the attackers attempted to gouge out one of his eyes, he said.

A final witness, Capitol police officer Harry Dunn, described the violence he witnessed and the racial epithets he endured.

All four referred to members of the mob as "terrorists."

Afterward, at a news conference in front of the U.S. Department of Justice, six Republican lawmakers raised questions about the treatment of Jan. 6 defendants, with some referring to the suspects as "political prisoners."

"It's a battle of semantics and rhetoric," the lawmaker from Jonesboro said.

"They're rioters. They're rioters just like the rioters in Portland and Seattle and Minnesota," Crawford said. "They're lawbreakers. I'm not trying to soft-sell this or anything like this. But terrorists? Come on."

"This is about as close to a reflection of the dynamics of the populace as you can get," he said. "If we're seeing this division in the House of Representatives, that's reflective of what's taking place around the country."

Crawford was the only member of the Arkansas congressional delegation who agreed last week to discuss Tuesday's committee hearing and the subsequent news conference by the Republican lawmakers at the Justice Department.

(Sen. Tom Cotton's office pointed to his written statement from May rejecting calls for a Jan. 6 commission.)

Requests for comment were made to each lawmakers' offices Tuesday, Wednesday, Thursday and Friday.

Through spokesmen, none of the others would say whether they considered the Jan. 6 suspects political prisoners.

"Those comments belong in the funny pages, not in serious talks," he said. "That is just absolutely ridiculous."

He also criticized Arkansas Republicans for sidestepping the issue.

"This is a fast ball right over the middle. It's an easy one for them to say, 'They're not political prisoners. They broke the law,'" he said.

"All of our delegation has proven that they do not have the courage to tell the truth to their constituents," he added.

At the news conference, U.S. Rep. Paul Gosar, R-Ariz., alleged that the Jan. 6 defendants are treated worse than the foreign terrorist suspects being held by the U.S. at Guantanamo Bay in Cuba.

"There are disturbing reports of some of these prisoners being abused and held in solitary confinement for up to 23 hours a day. These are not unruly or dangerous violent criminals. These are political prisoners who are now being persecuted," he said, lamenting what he called their "unjust suffering."

The Department of Justice declined to comment on Tuesday's news conference, but noted that an indexed list of Capitol Breach cases, with links to many of the relevant documents, is available at https://www.justice.gov/usao-dc/capitol-breach-cases.

Other items "contained in the public record" are available at https://pacer.uscourts.gov/, the spokesman noted.

"It's not designed in a bipartisan way. It's not designed to go where the facts take them. It's really, I think, it's a missed opportunity because there are a lot of folks that do want to get to the bottom of what happened and what we learned and how to prevent it from happening again," Crawford said.

Pelosi formed the committee after the failure to create a different proposed body to examine the events of Jan 6.

In May, the House voted 252-175 to create a bipartisan independent commission to investigate the Jan. 6 attack on the Capitol. Membership would have been evenly split between Republicans and Democrats.

According to the language of the bill, subpoenas would have been issued upon the agreement of the Democratic chairperson and the Republican vice chairperson" "or by the vote of a majority of the members of the Commission."

It empowered the Democratic chairperson to hire staff "in consultation with the Vice-Chairperson, in accordance with rules agreed upon by the Commission."