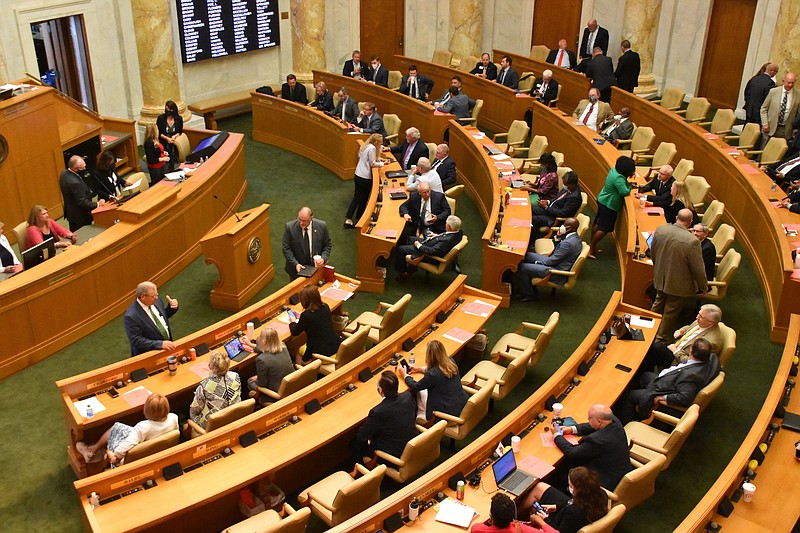 Both the Arkansas House of Representatives and Senate on Thursday handily approved identical bills aimed at backing Gov. Asa Hutchinson's decision to end the state's participation in a supplemental federal unemployment benefit program.

On the second day of the special session called by Hutchinson, the House voted 74-17 to send House Bill 1001 by Jeff Wardlaw, R-Hermitage, to the Senate. The Senate Public Health, Welfare and Labor Committee later recommended Senate approval of the bill.

The Senate voted 29-6 to send an identical bill, Senate Bill 1 by Sen. Jonathan Dismang, R-Searcy, to the House. The House Public Health, Welfare and Labor Committee later recommended House approval of the bill.

Legislative leaders hope to wrap up action in the special session this morning.

The votes largely followed party lines with most Republicans voting for the bills and most Democrats opposing the bills.

Only three Democrats -- Sen. Larry Teague of Nashville, and Reps. Deborah Ferguson of West Memphis and Mark Perry of Jacksonville -- voted for the respective measure in their chambers.

Wright's temporary injunction against Hutchinson's order affects some 69,000 unemployed Arkansans who had been receiving weekly $300 federal supplements to their regular state unemployment compensation benefits. The ruling has been appealed to the state Supreme Court.

Hutchinson announced in May that he would end Arkansas' participation in the federal programs after June 26, saying the federal payments interfered with employers' ability to find enough workers.

The Republican governor's decision -- similar to those made by other Republican governors -- ended Arkansas' participation in the program with 10 weeks of benefits still available. Nationally, the federal pandemic-assistance supplements end Sept. 6.

Dismang told senators that the governor issued a letter dated May 19 that terminated the agreement implementing the Relief for Workers Affected by Coronavirus Act between the U.S. Department of Labor and the state of Arkansas, effective June 26, for the majority of that program, and effective June 30 for the rest of it.

"I think all of us in this room, regardless of what you thought about that termination, assumed that the authority did rest with the executive branch," Dismang said.

Dismang said SB1 "just reaffirms that the executive branch does have the ability to terminate this type of program here in the state."

But Senate Democratic leader Keith Ingram of West Memphis said SB1 would become "retroactive to May 19, 2021," if it's enacted, and some lawyers are worried that this retroactive provision of the bill will lead to a lawsuit that the state will lose.

He questioned whether it would make sense to have SB1 "become effective as of this day and not risk losing a lawsuit and not only paying out the additional money, but paying out additional [legal] fees."

But Dismang said, "In my opinion, all we are doing is reasserting to the courts where we thought the authority already laid."

"I think this is just to provide clarification, and there is no doubt in my mind that it will be challenged in some way or in particular the fact that it could be retroactive," he said. "At this point, I think that's something I want to let the courts decide, and we will be able to see if they agree."

Sen. Linda Chesterfield, D-Little Rock, told senators that there are people in Arkansas who need the federal assistance.

"We have a tendency to believe that people are not going back to work because they are lazy or they are dysfunctional," she said.

But Chesterfield said, "there are people who genuinely cannot go back to work, and we are taking our fellow citizens off of a program that will expire next month. It does not make sense.

Sen. Joyce Elliott, D-Little Rock, said, "We are doing this in isolation based on assumptions we have about people who are getting the money."

"I don't recall that we have ever come up here for the most part and say we are going to take any kind of benefit away from a business," she said. "We are doing this in total isolation without even talking to the people who are going to be affected by this [bill]."

Sen. Kim Hammer, R-Benton, said he has talked to few people, who are drawing these supplemental federal unemployment benefits.

"But let the voice on the other side of the argument be heard too, and that is the employers who are begging people to come to work, and consistently I hear that story, that the reason people aren't wanting to come to work is because they continue to get that $300 check, so why should they come to work when they can make the same amount of money staying home?" he said.

The nonprofit Legal Aid of Arkansas and five jobless Arkansans filed a lawsuit July 23 against Hutchinson and the state Division of Workforce Services, which manages the state's unemployment compensation program.

In his ruling, Wright wrote, "The Court has serious doubts that the Governor and the Director of Workforce Services were acting within the scope of their duties, as these decisions would normally be the subject of legislation from the General Assembly."

According to the lawsuit, of 68,853 jobless Arkansans affected by Hutchinson's order, 48,496 lost all benefits. The remaining 20,357 continued to receive standard state unemployment benefits but lost the weekly $300 supplement, the lawsuit said.