For many, medals not only standard 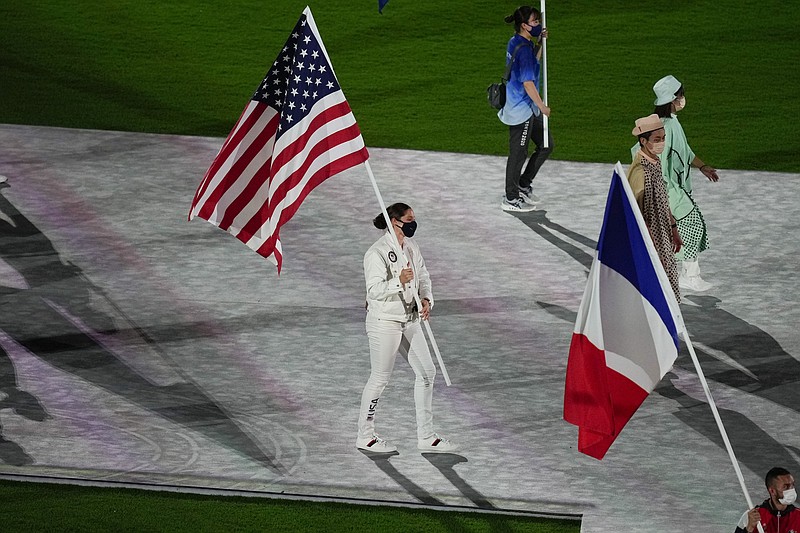 Kara Winger, of the United States of America, and Steven Da Costa, of France, carry their country's flags during the closing ceremony in the Olympic Stadium at the 2020 Summer Olympics, Sunday, Aug. 8, 2021, in Tokyo, Japan. (AP Photo/Vincent Thian)

TOKYO -- Kara Winger is the American record-holder in the javelin throw who just wrapped up her fourth Olympics. She has never finished higher than sixth place.

When she got the call over the weekend telling her she would be carrying the flag Sunday for the United States at the closing ceremony of the Tokyo Games, her first reaction was "shock."

"I expected tweets with people saying, 'What has she done?' " Winger said.

Turns out, an awful lot over a career that has spanned two decades. That the American athletes chose her as flag-bearer is a fitting lens through which to view the U.S. accomplishments at these Games.

The Americans won 113 medals, which, for the fifth straight Summer Games, was double-digits more than the nearest competition. It was, however, eight fewer than what they won five years ago in a Rio de Janeiro Olympics with fewer events.

When the athletes voted for Winger to represent them, they tapped into the core message resonating inside a fractured, fractious U.S. Olympic family over the past few years: The medals shouldn't matter more than the athletes who win them. Or sometimes not matter at all.

"We spent a ton of energy on creating an environment where people could be heard, and feel safe to be heard," said Sarah Hirshland, who came on as the CEO of the U.S. Olympic and Paralympic Committee in 2018.

She was tasked with repairing the damage from sexual-abuse cases that led athletes to wonder whether they were valued for more than simply what they won.

If Winger as flag-bearer is one sign that the USOPC has made some headway, then Simone Biles gets credit for making sure the message stayed front and center.

The willingness of the highest-profile athlete at the Games to step away because it didn't feel right, and to place her personal welfare over victory for herself and country, was startling at first.

Much more than costing medals, what Biles did was re-center the focus. As the Olympics moved into their second week, all but the most cynical observers started celebrating athletes for winning bronze -- or nothing -- even if they were picked to win gold.

"These are not the USOPC's medals, these are the athletes' medals," Hirshland said.

That was part of what Hirshland pitched as a new outlook for the USOPC.

Leading up to the Games, the USOPC introduced new mental-health offerings and created a new athlete-service division -- first as a nod to the fallout from the sex-abuse cases, then as a resource to help athletes cope with a yearlong delay and the coronavirus pandemic.

Their offices stayed busy over the 17 days in Tokyo.

Still, Hirshland and the rest of the federation leaders are bound to hear their fair share of critiques -- if not about Tokyo, then about what lies ahead.

The Beijing Games start 180 days from Sunday's closing act in Tokyo. Much as the USOPC was forced into playing a lead role in changing the outlook on the IOC's rule banning demonstrations, it will be pressed by some to boycott those Games as a sign of protest of China's much-criticized human-rights record. The federation almost certainly won't go down that road, but the questions will persist.

So will doubts about its effectiveness in putting athletes first. A snapshot: One program designed to funnel more money into athletes' pockets through sponsorship deals has been lauded by some, but criticized by others in the tightly knit world of agents who deal with Olympic clients.

And the USOPC is still involved in a number of lawsuits stemming from abuse cases.

And, the medal count did fall by 6%, even though there were more sports and more medals to be won. If it happens again three years from now in Paris, with the Los Angeles Olympics on deck, it stands to reason not everyone will be so sanguine.

And yet, there's a reason Winger got the nod to carry the flag Sunday night.

Her fellow Olympians appreciated the story of an athlete who devoted her life to throwing the javelin -- "A lot of us are in weird sports," Winger acknowledged -- knowing the rewards wouldn't all be hanging from her neck in the end.

"An absolute joy," Winger said. "I don't know what the medals feel like, but I don't think I'll ever top this honor. And for me, that's totally, totally fine." 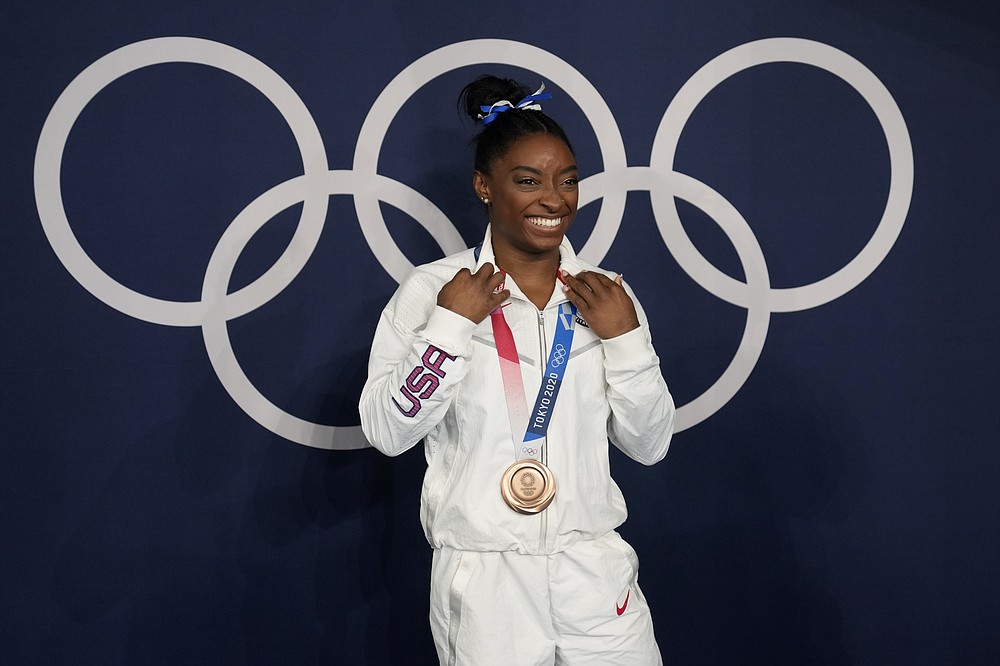 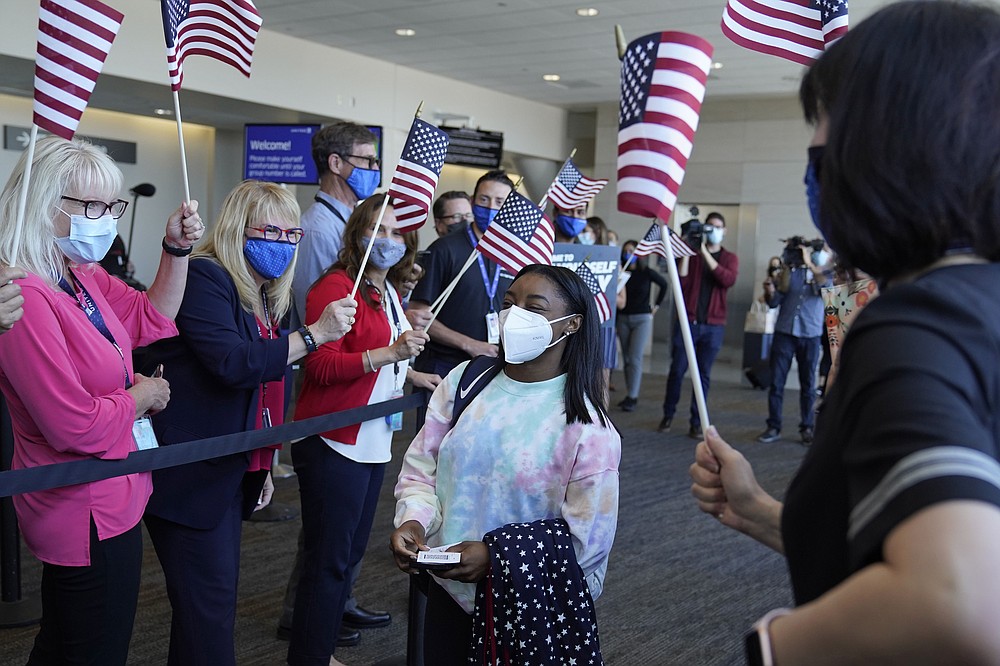 FILE - In this July 14, 2021 file photo, Simone Biles walks to her gate for her flight to the Summer Olympic Games in Tokyo as United Airlines employees wave flags during a send-off event for the U.S. Women's Gymnastics team at the San Francisco International Airport. Biles and Naomi Osaka are prominent young Black women under the pressure of a global Olympic spotlight that few human beings ever face. But being a young Black woman -- which, in American life, comes with its own built-in pressure to perform -- entails much more than meets the eye. (AP Photo/Eric Risberg, File) 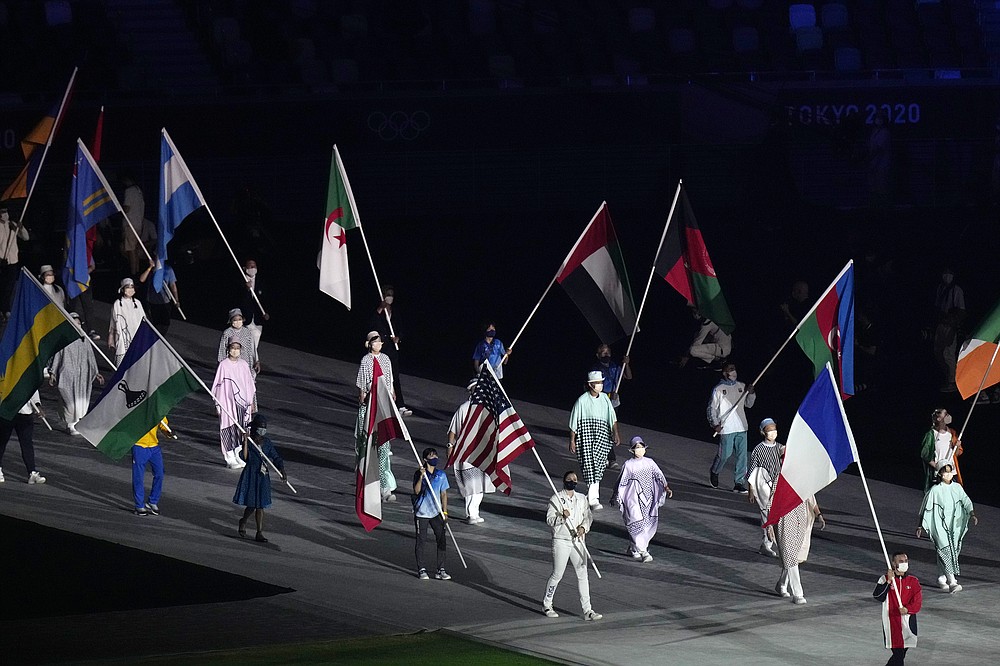 Kara Winger, of the United States of America, center, and other flags are carried in during the closing ceremony in the Olympic Stadium at the 2020 Summer Olympics, Sunday, Aug. 8, 2021, in Tokyo, Japan. (AP Photo/Hassan Ammar) 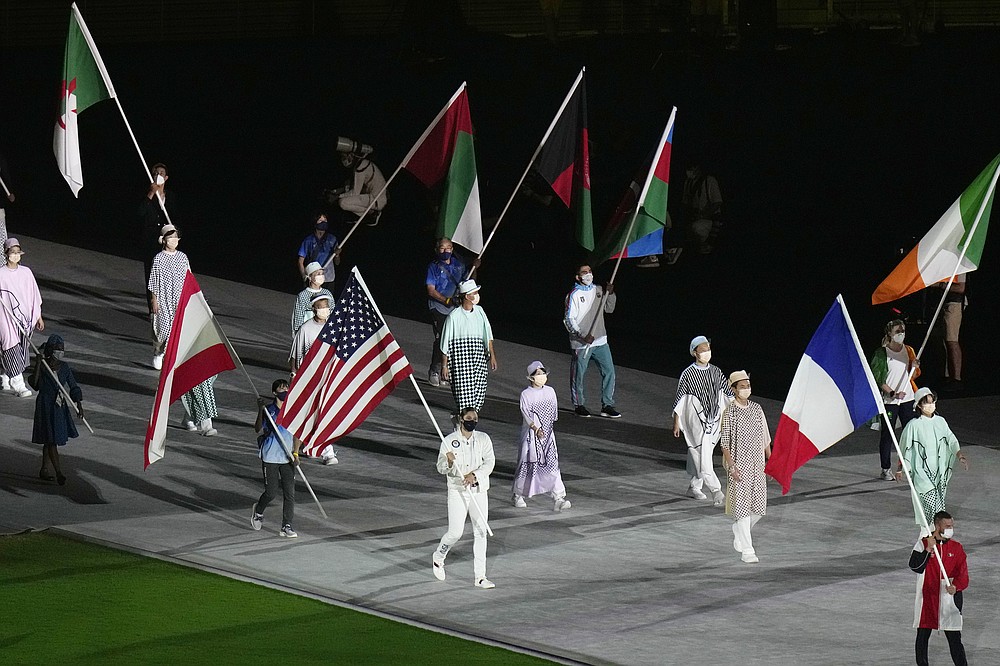 Kara Winger, of the United States of America, center, arrives to the closing ceremony in the Olympic Stadium at the 2020 Summer Olympics, Sunday, Aug. 8, 2021, in Tokyo, Japan. (AP Photo/Hassan Ammar) 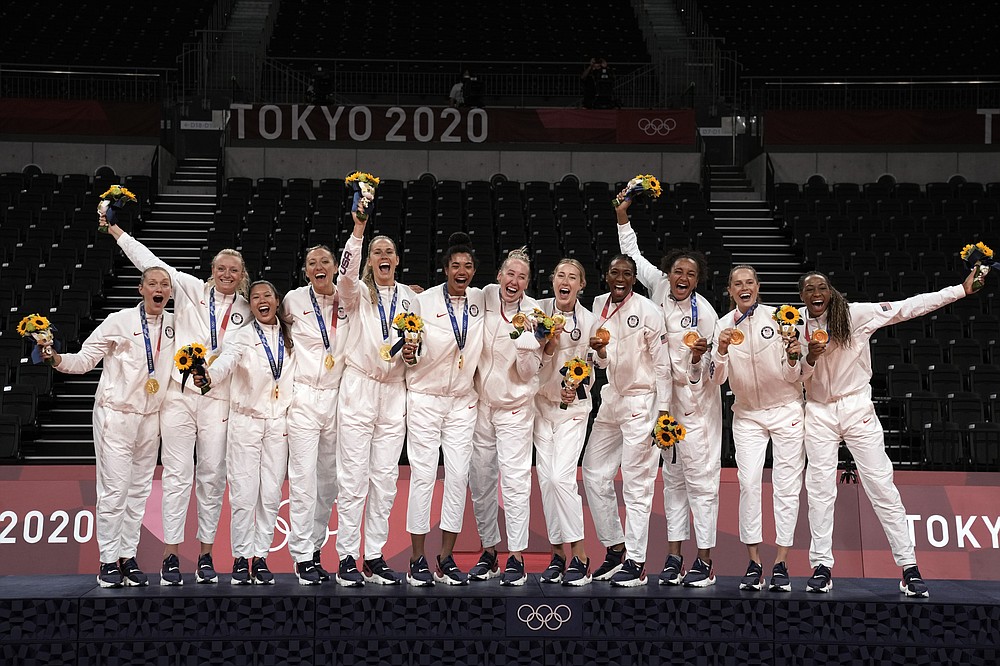 Players from the United States pose after winning the gold medal in women's volleyball at the 2020 Summer Olympics, Sunday, Aug. 8, 2021, in Tokyo, Japan. (AP Photo/Manu Fernandez)

Print Headline: For many, medals not only standard