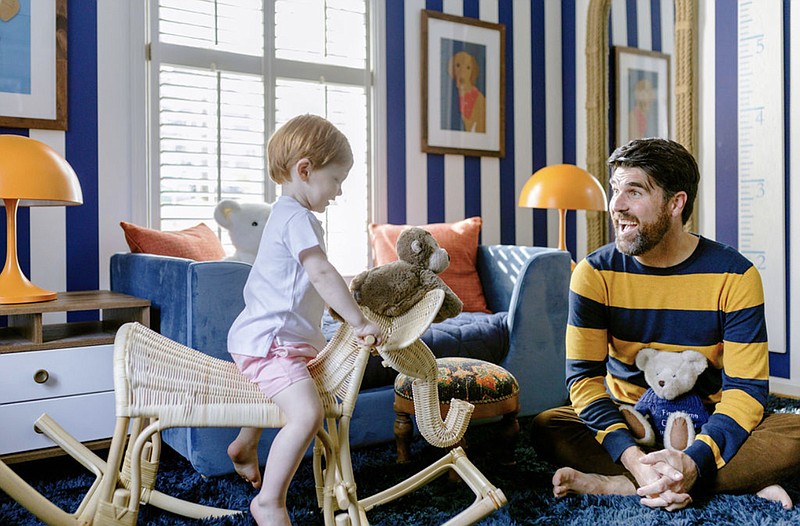 ATLANTA — Atlanta's Brian Patrick Flynn never went to design school. He spent years decorating film sets, which led cast and crew to ask him to do projects at their homes as a side hustle. He eventually landed a gig building outhouses for HGTV sweepstakes competitions "Urban Oasis" and "Dream Home."

Now he's on Discovery+ with his very own show "Mind for Design," which is really just Flynn fixing up rooms or parts of houses for clients documentary-style. He never addresses the camera. The feel is casual, improvisational, without any hammed-up drama. Most of the first season featured clients from around metro Atlanta. The first two episodes are now available on Discovery+.

"I'm self-taught," said Flynn, who lives in the Buckhead neighborhood. "I don't know exactly what I'm doing. The way I design is very loose. The show is about what it's like to work for a small boutique design firm."

The first episode focuses quite a bit on color palette, which he admits "can get annoying at times. When I was about 29 years old, I had very small budgets and no expertise or understanding of certain aspects of design so color was where I could make a difference. I've since become more knowledgeable of metals, woods, wallpaper and stone. I have become more refined over the years."

Flynn said Southern design is more focused on architecture than color, with materials "standing the test of time." But he likes to do both.

He said he wanted the show, which was produced by Atlanta-based Crazy Legs Productions, to have a "unique cinematic aesthetic with a lot of natural light. It's just two cameras rolling and we are doing our jobs."

Flynn is active on social media and assiduously posts his design work on his Instagram for his 161,000 followers. It helps him get more business, he said. Some of those videos end up on the show as well.

"I consider investing money in my photographer as my marketing budget," Flynn said. "Let the world see through my latest work, even if it doesn't end up in a magazine, and help keep me relevant."

A Florida native, he began his career as a news producer in South Florida during the 2000 presidential recount. He then latched on to a reality show on Discovery's "Surprise by Design," learning about interior design, building codes and color theory behind the scenes. Discovery then moved him to Atlanta for a spin-off show called "Rally Round the House."

This led to his work in recent years with HGTV.

He visited his old friend Joanna Gaines on a trip to Waco, Texas, two years ago and she told him about the new Magnolia Network she and her husband, Chip, were starting. It would end up being attached to Discovery+.

She offered Flynn a show. He didn't hesitate.