What a summer visit to Barcelona entails now 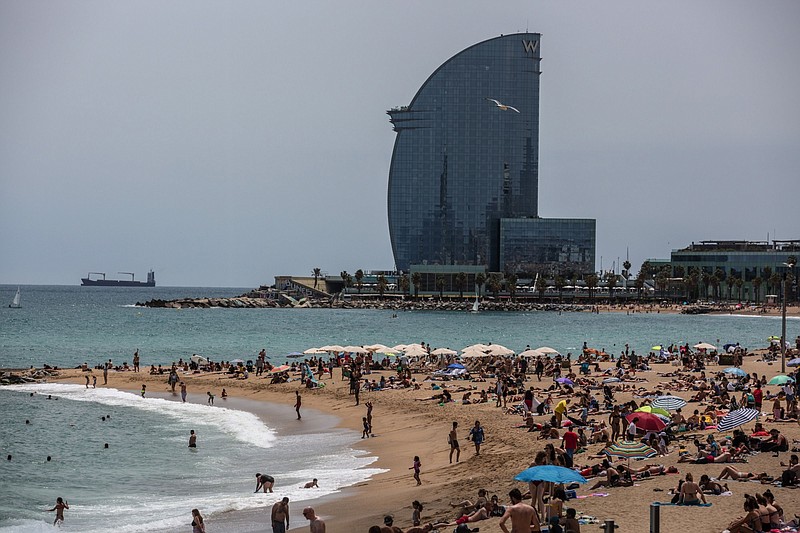 On most summer days this year, venturing down Barcelona's leafy Las Ramblas has felt surprisingly relaxed — devoid, for once, of thick tourist crowds and elbow-jostling.

But the rattling of suitcase wheels against the narrow, cobbled streets of the gothic quarter has slowly started to return since international tourism resumed in May, and so have the groups of travelers. They're not just wandering discreetly in pairs: They're sizable groups led by guides with megaphones, and this time they're standing in large, socially distanced circles that fill up entire streets.

Foreign visitation to the city is still a fraction of what it was in 2019. That year, almost 1 million overseas travelers came in the month of June, compared to 191,475 visitors during the same period in 2021. But there's no desire to go back to what was. Pre-pandemic, Barcelona was at the heart of global debates around overtourism, with locals having elected Mayor Ada Colau in 2015 on her promises to curb the clogged streets, litter, noise, and rent hikes that they attribute to a disproportionately large visiting population.

Now there are additional concerns, namely, the newest wave (with the delta variant) of covid-19 that has brought a huge increase in cases and hospitalizations. In late July, the 14-day rolling case count had shot up to 1,218 per 100,000 inhabitants, making Barcelona the largest virus hot spot in Spain and filling more than 10% of the region's hospital beds with covid-19 patients. As a result, curfews have been reinstated at 1 a.m., and the government has ordered all nonessential activity to end at 12:30 a.m. Also citing alarm over the high number of cases, the U.S. Centers for Disease Control and Prevention raised the travel warning for Americans visiting Spain to a Level 4, the highest rating, on July 26.

Not all progress has been undone, though. The vaccine rollout is advancing with more than 56% of the population having received both doses as of July and restaurants and bars remaining open at 50% capacity, with up to six people allowed at indoor tables and groups of 10 outside. And shops, museums and other cultural venues are open at 70% capacity.

Only certain visitors are allowed in. Europeans can now visit thanks to the mid-July debut of the European Union's covid-19 passport, which exempts fully vaccinated people from testing or quarantine. Americans and Australians are also allowed to travel freely, and Britons can enter Catalonia with proof of vaccination or a negative coronavirus test — though U.K. rules require them to quarantine upon returning to their home country. For most of the rest of the world, vacationing in the country isn't on the horizon.

Those who return will find a city marked with many "for sale" and "to let" signs. More than half of Barcelona's hotels remain closed, and more than 30% of businesses and restaurants say they won't reopen, according to a recent government survey. 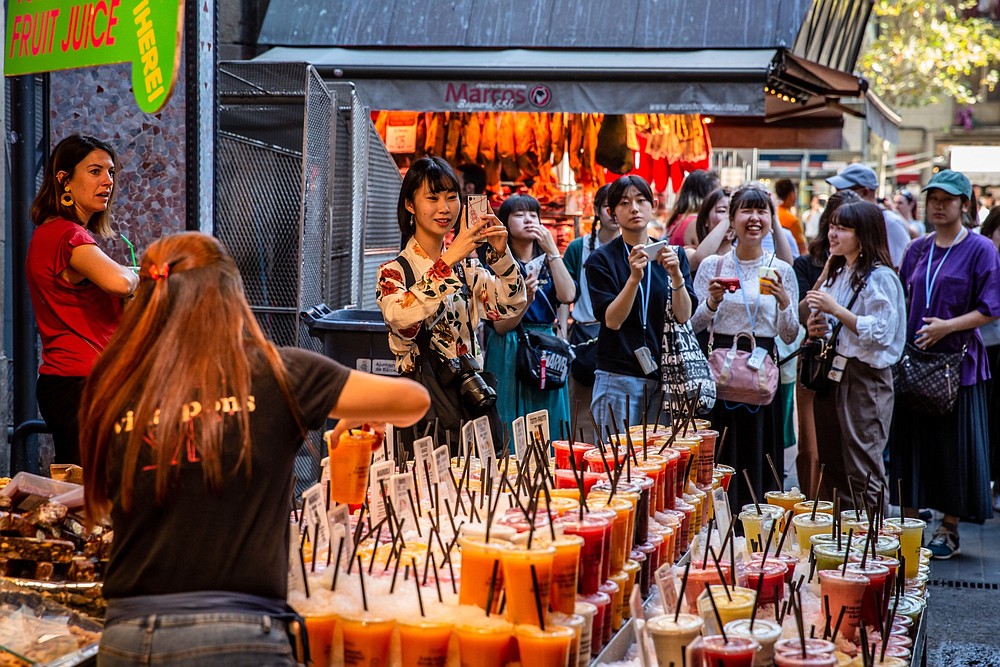 Tourists take smartphone photographs at La Boqueria food market in Barcelona, Spain, in 2019. The market closed during the pandemic but has reopened. (Bloomberg/Angel Garcia)

But the absence of tourists has brought some joy to those who've been there to witness it. "Locals are rediscovering the neighborhood," says May Jong, who runs Hotel Neri, which is carved out of a medieval building and an 18th-century mansion. And as places such as Casa Fuster, a palatial property on central Passeig de Gracia, have reopened, locals have been eagerly supporting them. "From 7 to 1 there was not a free table on the terrace," says waiter Kevin Bausson about the spot's opening night back in July.

Eduard Torres, chair of the city's tourism board, Turisme de Barcelona, says growing engagement with locals is probably the biggest pandemic silver lining for the city's ailing hospitality sector. "We hope that this relationship will be maintained, because the most beautiful thing there is for a foreign visitor is to go to a place where locals go," he says.

Between its struggles to tamp down the pandemic and rewrite its tourism strategy, Barcelona is a city in flux. Here's what to expect if you plan to visit. 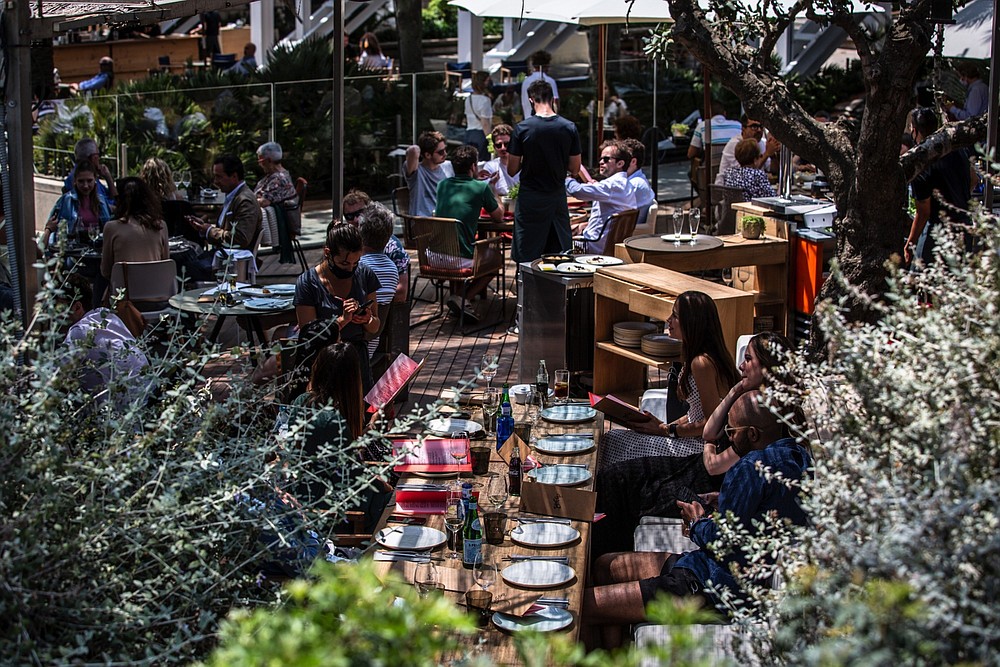 Customers dine on a restaurant terrace on Barceloneta promenade in Barcelona, Spain, in June. (Bloomberg/Angel Garcia)

Terraces have always been a big part of Barcelona's restaurant scene, so the city was well equipped for the new global phenomenon that's outdoor dining. But the city's food culture has evolved in other ways. Some of the most famous places to get tapas, paella, or pintxos — where you're charged by the toothpick for self-serve tapas on tiny skewers — were unable to withstand the worst months of the pandemic, including the beloved seaside spot Cal Pinxo. Other notable closures: the 100-year-old Cafe de Barcelona and famed El Bulli chef Albert Adria's three lauded spots. Fortunately the temporarily shuttered stalls of the famed La Boqueria market, however, have re-emerged to find a semblance of normality. And alongside them are new spots prioritizing sustainability and — unusual for a city that loves its vermouth — natural wine, not unlike the neo-bistro movement that swept Paris in the last decade.

One is Contracorrent, literally translating to "against the grain," which opened amid the pandemic near the Arc de Triunf. Its sunny terrace is now a backdrop for zero-kilometer tapas like clams with ginger and tapioca caviar or eggplant carpaccio with edible flowers; they're typically paired with natural wines and served directly from a chef whose pedigree includes the best-in-the-world Celler Can Roca.

In the Born neighborhood, Proper is similarly focused on the local but also on fermentation and wood-fired grilling, thanks to its Argentine chef Augusto Mayer, who pickles figs and makes his own bread starters. The spot opened this summer and stocks a large list of biodynamic and natural wines.

Farther off in Eixample is the newly minted local favorite Besta, with a spacious terrace for seafood-heavy dishes like sea bass tartare with Jerez hollandaise that borrow heavily from Galician and Catalonian traditions. To drink, the restaurant makes its own gin — Barcelonans are famously devoted to the G&T.

The rise of the delta variant — and the ensuing curfews — have given nightlife a false start in the Catalan capital. But there's plenty to do before the bars take last call.

If you're covid-weary: Travelers don't often make it to the hilltop Parc de Montjuic area on the outskirts of the city, even though it contains a triad of cultural triumphs. Of the Jardi Botanicde Barcelona, the Museum of Art of Catalonia, and the Fundacio Joan Miro — each spectacular in its own ways — the Miro museum is the most irresistible. Its rooftop terrace alone is worth the trip, with colorful and larger-than-life sculptures framing views of the Barcelona skyline.

If you need a gentle reentry: The trippy architectural complex known as Casa Batllo is almost completely outdoors, making it especially "covid-friendly." That said, there's a new twist to the iconic attraction. The 10D Experience, a 21,500-square-foot digital interactive gallery on-site, is like a ticket into the inner workings of Antonio Gaudi's own mind, using video projections, aromas released by motion sensors, and nature-inspired sounds to immersively re-create his sources of inspiration.

If you want to pretend the pandemic never happened: Given that nightclubs have once again closed, it isn't exactly easy to party like it's 2019. Your best shot is planning a visit for late September to coincide with one of Barcelona's famed cultural festivals — the Merced festival, paying tribute to the city's patron saint. It's when human pyramid competitions and ronda-style dancing fill the squares and bars get packed with revelers. 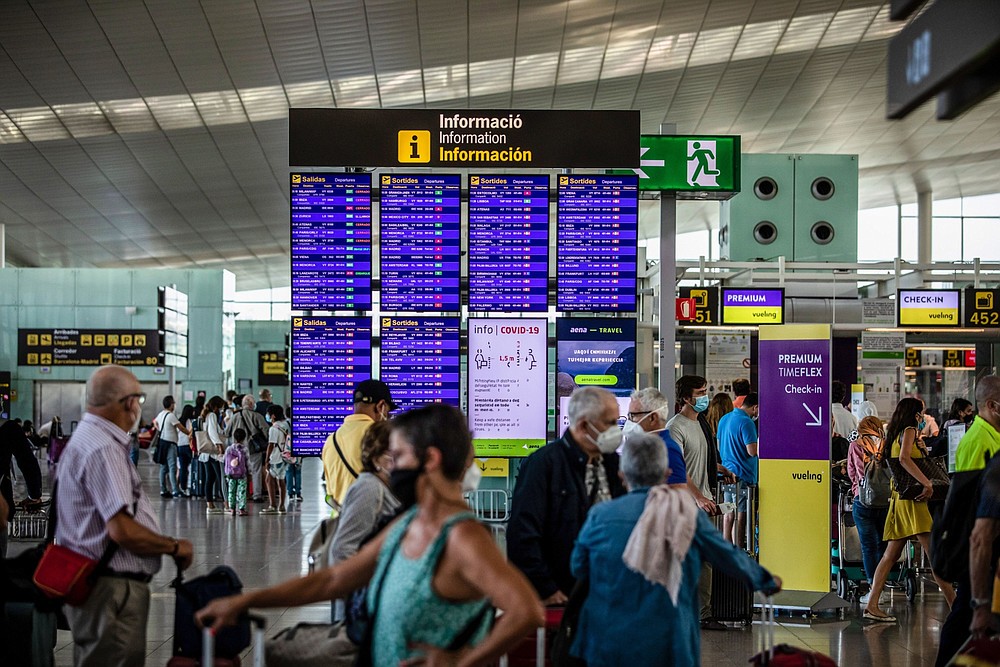 Barcelona is very walkable, with a compact city center that makes any two points easily accessible on foot within half an hour. Subways, tramways, and buses are running as usual — down to the crowds and the heat — and they won't easily take you to Montjuic, which is best accessed via Uber or taxi. Biking has becoming the popular alternative, with the city having added 15 miles of bike lanes since the pandemic's start. Tourists can rent bicycles through Bicing, the council's public bike scheme, or use e-scooters, of which there are many choices. The most common rental apps are Lime, Bolt and Tier.

You can be fined $119 in U.S. dollars for not wearing a mask indoors — unless you're eating or drinking — and locals have retained the convention of masking up outside. Shopkeepers have also been keeping on high alert, watching for patrons that don't sanitize their hands upon entering and asking them to do so. And forget about air kisses for greetings. These days, elbow bumps and leg shakes — a pseudo handshake of the feet that looks like a soccer move gone wrong — are a far more common, if also more awkward, way to say hello.