85-pound African tortoise makes a run for it, twice, but she's back home now 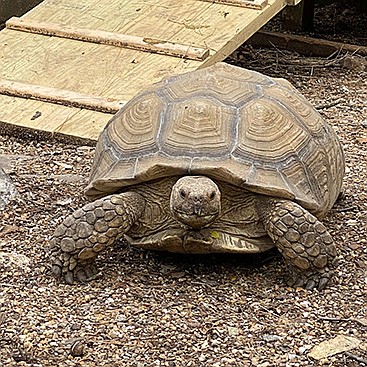 Photo submitted by Chelsea Hattaway - Potato, an 85-pound African spurred tortoise, has escaped from her owner?s backyard in North Little Rock. Chelsea Hattaway is offering a reward for her safe return.

An 85-pound African spurred tortoise that escaped from her owner's backyard in North Little Rock on Thursday has been found.

Chelsea Hattaway said a neighbor who lives half a mile away called on Sunday after reading a newspaper article about Potato, her 14-year-old tortoise, being on the lam.

The neighbor found Potato trying to cross the Young Road overpass over Interstate 40. He kept the tortoise in a shed for a couple of days before realizing who the owner was.

"She ate two watermelons while she was there," said Hattaway.

Hattaway said Potato escaped on Thursday by pushing through a gate that was loosely padlocked.

After being returned on Sunday, Potato did it again, pushing her way through another backyard gate that was supposed to be tied shut.

"We are looking now at replacing our entire fencing operations," said Hattaway.

A couple of hours after Sunday's escape, Hattaway received a call from the Arkansas State Police to let her know her tortoise was alongside the interstate.

"She had to have just made a beeline for the highway," said Hattaway. "The dispatcher had seen it on Facebook so she knew there was a tortoise at large."

Hattaway headed for the highway.

There, she found Potato.

"She was a little freaked out by the traffic so she was sucked up in her shell," said Hattaway. "When I got there, there were already three cars that had stopped. She's got a lot of friends. She's got a following at this point."

Hattaway said Potato is back home and the gates have been secured.

Hattaway said she doesn't know why her tortoise was so intent on crossing I-40. Joe's Garage is on the other side of the interstate. And Hatchet Jack's Sport Shop, which is a fishing store.

Hattaway adopted Potato nine years ago from a California turtle and tortoise rescue. Potato weighed 25 pounds at that time.

Hattaway said Potato escaped about a month ago from her parents' house in Little Rock. She was found three doors down, sitting in a driveway.

According to the San Diego Zoo, the African spurred tortoise is the largest mainland tortoise. It can grow to more than 30 inches in length. Some males can reach 200 pounds.

The African spurred tortoise's normal lifespan is 80 to 100 years, according to the zoo. Their age of maturity is about 15 years.