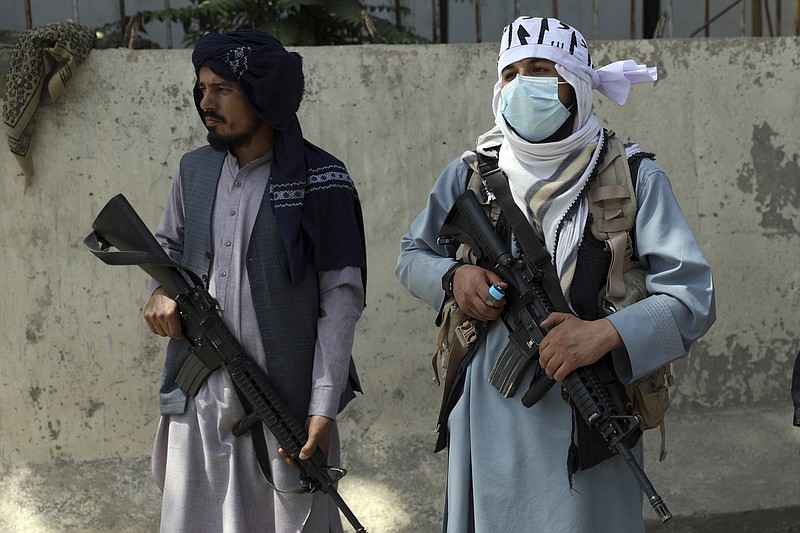 Taliban fighters stand guard in the main gate leading to Afghan presidential palace, in Kabul, Afghanistan, Monday, Aug. 16, 2021. The U.S. military struggled to manage a chaotic evacuation from Afghanistan on Monday as the Taliban patrolled the capital and tried to project calm after toppling the Western-backed government. (AP Photo/Rahmat Gul)

WASHINGTON -- Built and trained at a two-decade cost of $83 billion, Afghan security forces collapsed so quickly and completely -- in some cases without a shot fired -- that the ultimate beneficiary of the American investment turned out to be the Taliban. They grabbed not only political power but also U.S.-supplied firepower -- guns, ammunition, helicopters and more.

The Taliban captured an array of modern military equipment when they overran Afghan forces who failed to defend district centers. Bigger gains followed, including combat aircraft, when the Taliban rolled up provincial capitals and military bases with stunning speed, topped by capturing the biggest prize, Kabul, over the weekend.

The official was not authorized to discuss the matter publicly and so spoke on condition of anonymity. The reversal is an embarrassing consequence of misjudging the viability of Afghan government forces -- by the U.S. military as well as intelligence agencies -- which in some cases chose to surrender their vehicles and weapons rather than fight.

The U.S. failure to produce a sustainable Afghan army and police force, and the reasons for their collapse, will be studied for years by military analysts.

The basic dimensions, however, are clear and are not unlike what happened in Iraq. The forces turned out to be hollow, equipped with superior arms but largely missing the crucial ingredient of combat motivation.

Year after year, U.S. military leaders downplayed the problems and insisted success was coming. Others saw the handwriting on the wall.

Some elements of the Afghan army did fight hard, including commandos whose heroic efforts are yet to be fully documented. But as a whole the security forces created by the United States and its NATO allies amounted to a "house of cards" whose collapse was driven as much by failures of U.S. civilian leaders as their military partners, according to Anthony Cordesman, a longtime Afghanistan war analyst at the Center for Strategic and International Studies.

The Afghan force-building exercise was so completely dependent on American largesse that the Pentagon even paid the Afghan troops' salaries. Too often that money, and untold amounts of fuel, were siphoned off by corrupt officers and government overseers who cooked the books, creating "ghost soldiers" to keep the misspent dollars coming.

Of the approximately $145 billion the U.S. government spent trying to rebuild Afghanistan, about $83 billion went to developing and sustaining its army and police forces, according to the Office of the Special Inspector General for Afghanistan Reconstruction, a congressionally-created watchdog that has tracked the war since 2008. The $145 billion is in addition to $837 billion the United States spent fighting the war, which began with an invasion in October 2001.

The $83 billion invested in Afghan forces over 20 years is nearly double last year's budget for the entire U.S. Marine Corps and is slightly more than what Washington budgeted last year for food assistance for about 40 million Americans.

Doug Lute, a retired Army lieutenant general who help direct Afghan war strategy during the George W. Bush and Barack Obama administrations, said that what the Afghans received in tangible resources they lacked in the more important intangibles.

"The principle of war stands -- moral factors dominate material factors," he said. "Morale, discipline, leadership, unit cohesion are more decisive than numbers of forces and equipment. As outsiders in Afghanistan, we can provide materiel, but only Afghans can provide the intangible moral factors."

By contrast, Afghanistan's Taliban insurgents, with smaller numbers, less sophisticated weaponry and no air power, proved a superior force. U.S. intelligence agencies largely underestimated the scope of that superiority, and even after President Joe Biden announced in April he was withdrawing all U.S. troops, the agencies did not foresee a Taliban final offensive that would succeed so spectacularly.

Biden's announcement set the final collapse in motion, said Stephen Biddle, a professor of international and public affairs at Columbia University and a former adviser to U.S. commanders in Afghanistan.

Before April, the Afghan government troops were slowly but steadily losing the war, he said. When they learned that their American partners were going home, an impulse to give up without a fight "spread like wildfire."

The failures, however, go back much further and run much deeper. The United States tried to develop a credible Afghan defense establishment on the fly, even as it was fighting the Taliban, attempting to widen the political foundations of the government in Kabul and seeking to establish democracy in a country rife with corruption and cronyism.

The U.S.-supplied Afghan air force took to the skies for a final flight overnight Sunday to Monday -- not to attack the Taliban, as it had so many times before, but to save some of its planes and pilots from capture as the insurgents took control of the country.

A total of 46 airliners had departed by Monday morning, carrying asylum-seekers, many of whom were employees of the airport, Tolo News, an Afghan news agency, reported.

At least six military aircraft departed Afghanistan in a flight for safety to former Soviet states in the north. Five landed in Tajikistan, Tajik authorities said.

One plane was shot down in Uzbekistan, but its two pilots reportedly parachuted and survived. A spokesman for the Uzbek military confirmed it had shot down an airplane that traveled without permission into the country's airspace.

It did not specify the type of plane, but pictures of the wreckage suggested it was a Super Tucano, a turboprop light attack aircraft made by the Brazilian company Embraer and provided by the United States to Afghanistan, said Paul Hayes, director of Ascend, a U.K.-based aviation safety consultancy.

In Tajikistan, the Ministry of Emergency Situations said three Afghan military airplanes and two military helicopters carrying 143 soldiers and airmen were allowed to land after transmitting distress signals. The shoot-down in Uzbekistan and the Tajik authorities' emphasis on their neutrality in allowing landings reflected the hard response that Central Asian nations, worried about antagonizing the Taliban, have had to fleeing Afghan soldiers.

Information for this article was contributed by Robert Burns, Nomaan Merchant, Lorne Cook and James LaPorta of The Associated Press and by Andrew E. Kramer of The New York Times. 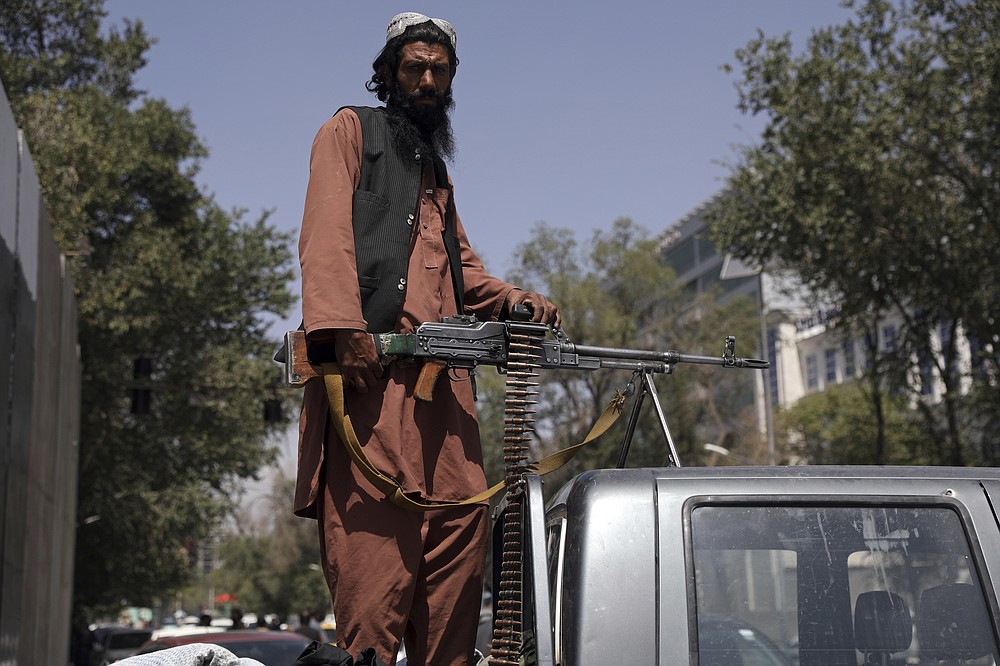 A Taliban fighter sits on the back of vehicle with a machine gun in front of the main gate leading to the Afghan presidential palace, in Kabul, Afghanistan, Monday, Aug. 16, 2021. The U.S. military has taken over Afghanistan's airspace as it struggles to manage a chaotic evacuation after the Taliban rolled into the capital. (AP Photo/Rahmat Gul) 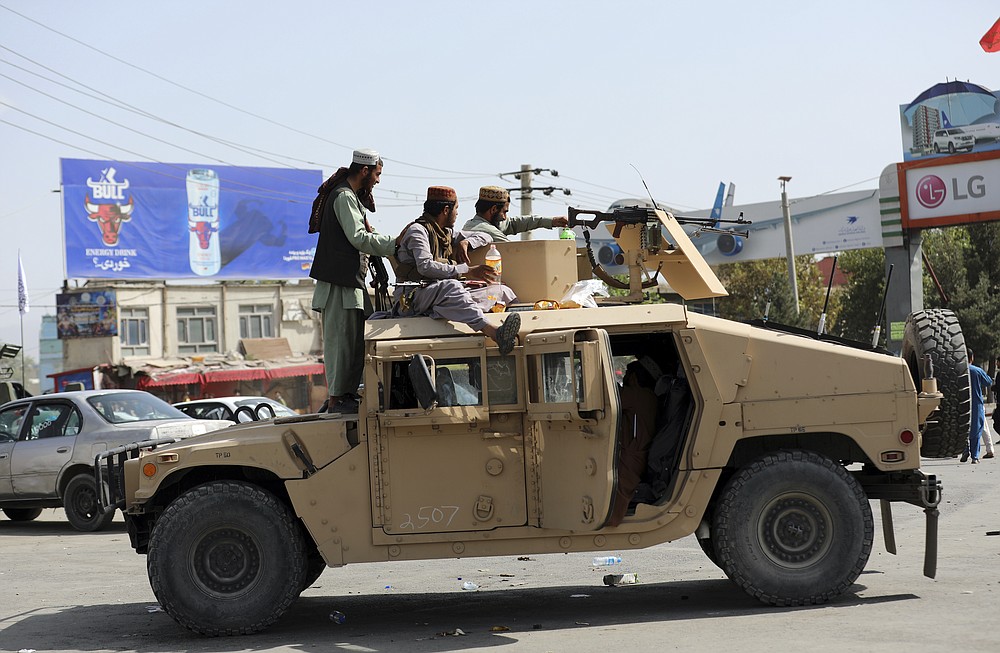 Taliban fighters stand guard in front of the Hamid Karzai International Airport, in Kabul, Afghanistan, Monday, Aug. 16, 2021. Thousands of people packed into the Afghan capital's airport on Monday, rushing the tarmac and pushing onto planes in desperate attempts to flee the country after the Taliban overthrew the Western-backed government. (AP Photo/Rahmat Gul)