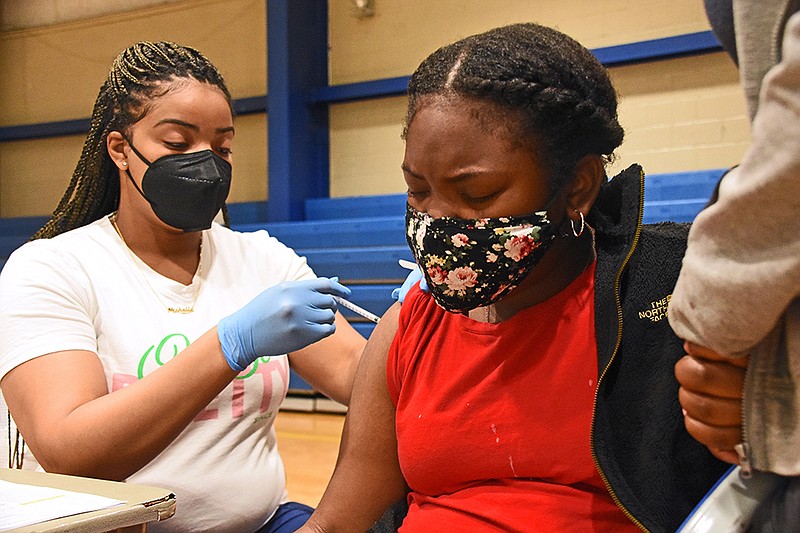 Madison Pride, 12, gets her first dose of the Pfzier coronavirus vaccine Saturday, May 15, 2021 from Haley Wilson, a registered nurse, during a vaccination clinic at Dunbar Community Center in Little Rock. (Arkansas Democrat-Gazette/Staci Vandagriff)

The number of people hospitalized with covid-19 in Arkansas fell for the second day in a row on Wednesday as the state's number of new cases continued to indicate a slowdown in the virus' spread.

The state's death toll from the virus, as tracked by the Department of Health, rose by 26, to 6,565.

That was just one more than the largest number of patients hospitalized in January during the state's winter surge.

The state's count of cases rose by 2,685, an increase that was smaller by 255 than the one the previous Wednesday.

It was third daily increase in a row, and the sixth in seven days, that was smaller than the one a week earlier.

After setting records for the previous three days, the number of virus patients who were on ventilators fell by two, to 326.

The number who were in intensive care, which reached an all-time high of 553 on Monday, fell for the second day in a row, going from 542 as of Tuesday to 524.

The number of intensive care beds statewide that were unoccupied, however, fell by two, to 15, reflecting an increase in non-covid-19 patients who were in intensive care.

After reaching a nearly seven-month high of 2,351 the week ending Aug. 7, the average daily increase in the state's case count over a rolling seven-day period fell to 2,103 as of Wednesday.

With new cases exceeding recoveries and deaths, however, the number of cases in the state that were considered active rose by five, to 23,788, after falling the previous two days.

The number as of Wednesday was still down from a seven-month high of 25,735 that it reached Sunday.