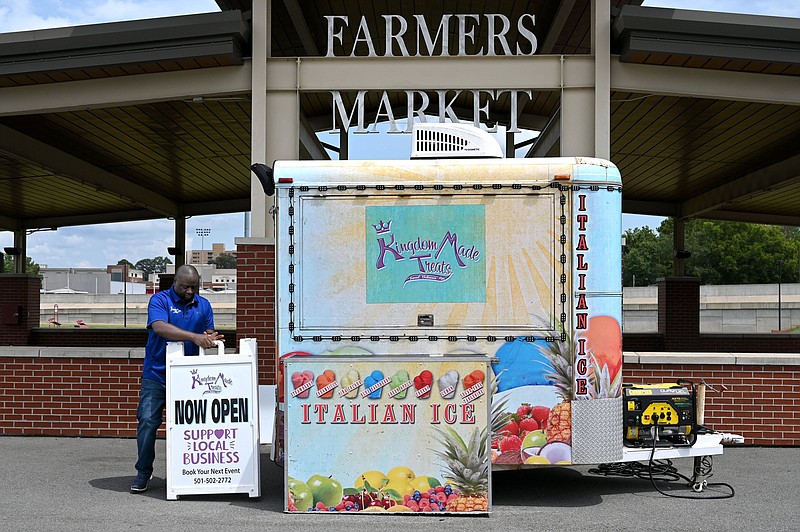 Tim Turner, owner of Kingdom Treats with his wife, Tamkea, sets up his food truck at the Jacksonville Farmers Market on Tuesday, Aug. 17, 2021. (Arkansas Democrat-Gazette/Stephen Swofford)

For the past three years, husband-and-wife team Tim and Tameka Turner have operated a mobile dessert business, primarily featuring Italian ice in a food trailer that sets up daily at places across Central Arkansas.

Tim Turner notes Kingdom Made Treats is a successful small business with a healthy operating profit and an emergency fund to draw from in tough times. Nevertheless, efforts to expand the business and add another outlet have been unsuccessful -- traditional lenders have been reluctant to provide funding because the Turners have faced financial challenges in the past.

Expansion efforts have been energized, however, with the injection of $25,000 in capital provided by the Imani Fund, a new statewide loan initiative that targets under-resourced small businesses that traditional banks won't touch.

"This new loan product is really suited to support our business model, especially now that we're trying to scale our business and you need working capital to do that," Turner said Tuesday.

Kingdom recently applied to a commercial lender but was denied because of past financial troubles, which Turner said were resolved before Kingdom was started.

"The beauty of this new loan program is that even though we've had some financial pitfalls, we have a viable business with no debt and they recognize the value in that," Turner said. "We have corrected and learned from our mistakes and this new fund doesn't penalize entrepreneurs for what's happened in their past."

The Imani Fund is a pilot program that offers microloans ranging from $5,000 to $25,000 to underserved entrepreneurs and uses an "innovative and creative approach to underwriting," said Benito Lubazibwa, founder of ReMix Ideas. The underwriting process will emphasize the character of business owners, their ability to execute on their business model and community-engagement efforts.

"This is going to challenge the way we underwrite loans for small businesses," Lubazibwa said Tuesday in announcing the program. "We are going to build a more just and equitable ecosystem for small business lending. There is a real need for this in the marketplace."

When lending to businesses, commercial banks have traditionally focused on credit history, collateral and the personal capital that owners are willing to invest in operations. That approach has made it difficult for entrepreneurs and small businesses, especially minority- and women-owned businesses, to secure funding.

With the Imani Fund, the goal is to minimize that underwriting approach, which has served as a systemic barrier that blocks access to capital for under-resourced entrepreneurs, Lubazibwa said.

"There are people with great ideas who can't secure the funding they need," Lubazibwa said. "We need to find another way to help those entrepreneurs -- the lack of access to capital really hurts their profitability and efforts to grow their businesses."

A strong business model will be the main factor in guiding the Imani Fund's investments, according to Lubazibwa. "You want a business to make money," he said. "The only way they can make money is to have a business model that is sustainable and scalable, and to have an owner with the ability to execute on that idea."

"The door to get a loan at Forge is a much wider door and more open for a lot of people than it would be at a bank," said Philip Adams, executive director of Forge, a nonprofit revolving loan fund that started in 1988 to provide financial support to the agricultural industry.

The Imani Fund will provide vital support to businesses that need access to capital to grow and succeed, Wayne Miller, executive director of the Little Rock Venture Center, said Tuesday.

"Many underserved entrepreneurs face significant hurdles when building a business, some of which may seem insurmountable at times," Miller said. "But powerful partnerships like the one between Remix Ideas and Forge can make real change.

"When underserved entrepreneurs have equitable access to the resources needed to grow businesses, the entire community flourishes as mentors are grown, jobs are created, and the idea of what is possible expands for everyone."

Kingdom is the first borrower under the Imani Fund, which also has three other businesses in the pipeline that should be approved soon, Lubazibwa said. Overall, the Imani Fund hopes to close 10 loans before the end of the year and to close on a total of 40 loans valued at $1 million by the end of 2022.

Fund participants can borrow for five years at a 5% interest rate, and they only have to make interest payments for the first six months. "Most under-resourced entrepreneurs, if they get a loan from a commercial bank, get low amounts and high interest rates," Lubazibwa said. "We're reversing that process."

ReMix has been a key partner to help Forge expand its lending in Central Arkansas and support underserved small businesses that can prosper with financial support, Adams said.

"The strain of going to a bank for underserved business is real and it goes back generations," Adams said. "Our goal is to take down that barrier. We want to address the fear and anxiety and those legacy issues that prevent people" from even applying for loans.

Forge's lending team will rely on ReMix to ensure small business borrowers have a solid foundation when they apply for a loan.

"We're sharing a lot of the decision-making with ReMix and it's a big deal for us to do that," Adams said. "When the loan package comes from ReMix to Forge it will have a standardized level of scrutiny, verification and technical assistance that we know has been provided.

"We're leveraging our long relationship with ReMix to create opportunities for the same group, and an even wider group, that he's been serving."

Traditional underwriting standards often shun businesses in underserved markets, according to Adams. "The lending is just not there and that's been a historical problem," he added.

Underwriting at commercial lenders "has been designed to make the pool of people borrowing money smaller and smaller and smaller," Adams said. "We've got to find ways to make that a bigger group rather than a smaller one and this is a tiny little drop in the bucket as a way to do that."

Forge has never required a minimum credit score for a loan. "As long as you've done the work and we've done the work together to build for the future, the past doesn't matter as much," Adams said.

Imani, which is the Swahili word for "faith," can provide cash to borrowers within 10 days of submission of their application, Lubazibwa said. "It's important to many of these businesses to get their money quickly to grow."

Along with funding, the loan initiative will provide mentoring and technical assistance through the business academy at Rock It! Lab, a business incubator program Lubazibwa started in partnership with the Central Arkansas Library System in July to cultivate under-represented minority entrepreneurs.

"Rock It! Lab is key to our efforts," Lubazibwa said. "Every business that receives funding will come to Rock It! Lab to work with us and we'll visit their business on a regular basis to provide the technical support they need to succeed."

With the Imani Fund loan, Kingdom plans to add another mobile unit that can travel from spot-to-spot while the trailer operating today will have a fixed location in the Levy neighborhood of North Little Rock at 4008 MacArthur Drive.

"This will help us establish stronger relationships with our customers so they know we're in a specific location that is easy to find," Turner added, noting that today the business relies on social media to send out messages on its location on any given day.

Businesses interested in participating in the Imani Fund can get more information by emailing RemixideasLR@gmail.com.