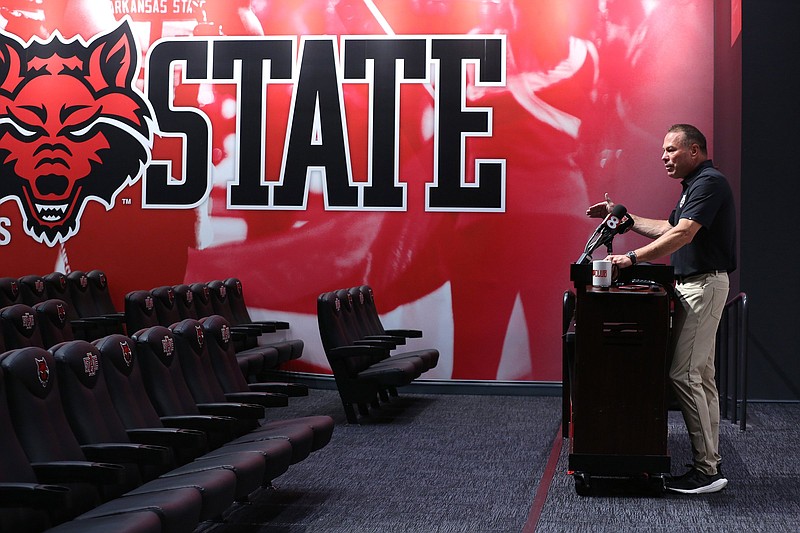 JONESBORO -- Until Monday, the Sun Belt Conference had never landed a team in the preseason Associated Press top 25.

Then the poll dropped, revealing a pair of ranking Sun Belt sides in No. 22 Coastal Carolina and No. 23 Louisiana-Lafayette.

It was a moment that had been building over the last few seasons. Both the Chanticleers and Ragin' Cajuns spent much of 2020 in the AP poll, and Appalachian State was featured at No. 24 in the final ranking of 2019.

Arkansas State -- despite a run of 9 consecutive winning seasons, 5 conference titles and 4 bowl victories -- has never appeared in the top 25.

That doesn't mean Butch Jones thinks it's not in the Red Wolves' future.

"We're building the best college football program in America," Jones said Thursday at ASU's Media Day. "I don't like to be referred to as Group of Five. We're Arkansas State. And then that's kind of the mentality we're taking with our players.

"Is it a challenge? Yes. Because not only do you have two teams that are ranked in the top 25 in our conference, there are a lot of other really good football teams [outside the Sun Belt] that are fighting for the same things that we're fighting for."

It's part of the vision that former athletic director Terry Mohajir saw for the Red Wolves when he was hired in 2012. Mohajir talked about ASU becoming the Boise State of the South, and the Red Wolves have made progress toward that goal.

Like the Broncos, who won eight Western Athletic Conference titles in nine seasons from 2002-10, ASU was Sun Belt's preeminent program for much of the past decade.

But Boise State broke through at a national level as well. The Broncos played and won the Fiesta Bowl on three occasions. They've finished the season ranked 13 times since 2002.

The Red Wolves -- even with a win at Kansas State last season -- aren't there yet.

So when Mohajir departed for Central Florida in March, he suggested ASU consider Tom Bowen as his replacement.

Bowen, who'd helped expand football programs at San Jose State and then Memphis, found a synergy between his vision for the Red Wolves and that of Jones, who was hired in mid-December.

"Arkansas State has the ability. There is no ceiling here, what you could become in Jonesboro," Bowen said. "There are certain schools in certain places where you can only move the rock so far. Here, I don't see that. Here, I see the opportunity to become as good or as great as we want."

From a football perspective, there may be no better place than the Sun Belt for teams outside the Power Five.

Only the American Athletic Conference had a team in this season's preseason poll in Cincinnati, and since the AAC was created at the start of the 2013-14 academic year, the Sun Belt has performed better than any other Group of Five conference in bowl games.

"If you're going to play FBS football, you need to focus on how to build [a national program]," Bowen said. "[The Sun Belt] has had better wins than the American, has beaten more Power Fives than the American.

"But because [AAC Commissioner] Mike Aresco is louder than the previous commissioners, everybody says, 'Well, the American [is the best], right?' Really? I was in the AAC. I know the difference. This is a serious football conference."

It won't take long for ASU to get a sense of where it stands among its conference foes. After an opening stretch of four non-conference games -- including a trip to No. 20 Washington -- the Red Wolves visit Georgia Southern and then host Coastal Carolina and Louisiana-Lafayette for a pair of prime time Thursday night contests on national television.

Win one or both of those games and the chance to play in the Sun Belt title game for the first time in program history becomes very real. The Sun Belt Championship Game has only been played since 2018.

Jones and his players aren't thinking that far ahead.

"Our mindset is not to look at those [teams] and not use them as measuring sticks," linebacker Caleb Bonner said of the Sun Belt's ranked programs. "We judge ourselves off [our performance]."

Jones wants to build the Red Wolves into conference competitors -- something he's done previously at both Central Michigan and Cincinnati -- and ASU believes it can rediscover its tradition, this time in a conference that continues to peak.

"When you start trying to measure yourself against others, you lose sight of your personal growth and development," Jones said. "We're going to measure ourselves against us, and how we play, how we execute, the toughness, the love and ownership, the brotherhood -- everything that goes into your football program"