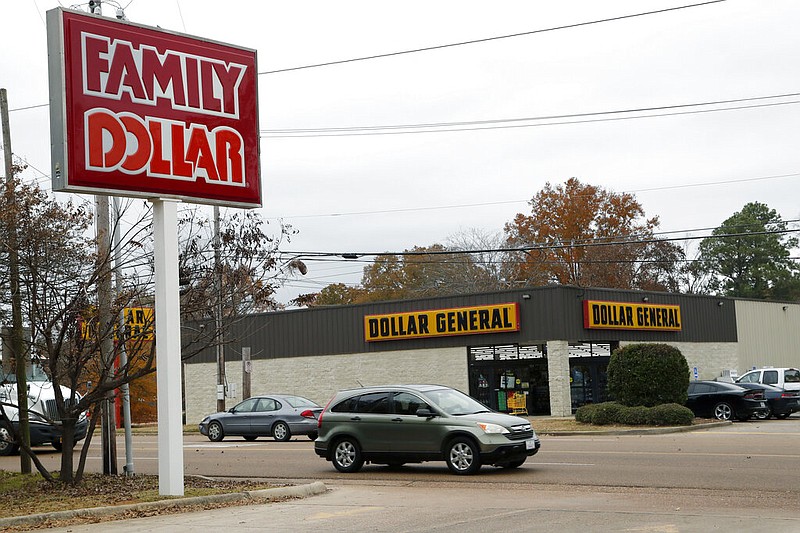 A Family Dollar sign is across the street from a Dollar General in north Jackson, Miss., in this Nov. 26, 2019, file photo. (AP/Rogelio V. Solis)

Kyle Dishman said he can't afford to shop at the grocery store anymore. Instead he goes to Dollar General, where he can make $40 stretch into a week's worth of groceries and the occasional can of motor oil for his car.

He sticks with pasta, frozen pizza and canned vegetables, fully aware that "any food you can buy for only $1 is not the greatest for you." But Dishman said that prices have gone up so much that he's started rationing his food.

"When you only have a certain amount to spend, it's like, why not just go to the dollar store?" he said.

A growing number of Americans are relying on dollar stores for everyday needs, especially groceries, as the coronavirus pandemic drags into its 18th month. Chains such as Dollar General and Dollar Tree are reporting blockbuster sales and profits, and proliferating so quickly that some U.S. cities want to limit their growth. The 1,650 dollar stores expected to open this year represent nearly half of all new national retail openings, according to Coresight Research.

Foot traffic at the largest such chain, Dollar General, is up 32% from pre-pandemic levels, according to Placer.ai, which analyzes shopping patterns using location data from 30 million devices.

Analysts say the explosive rise of dollar stores is yet another example of how the pandemic has reshaped the economy and widened the gulf between the wealthiest and poorest Americans. Rising grocery prices -- inflation is up 5.4% from last year -- coupled with disproportionately high job losses among low-income workers have left many of the most vulnerable Americans in even worse shape.

"It's a striking disparity: In this country, there is now dollar-store land and there is Whole Foods land," said Stacy Mitchell, co-director of the Institute for Local Self-Reliance, a nonprofit advocacy group. "And if you live in Whole Foods land, it's very hard for people to understand just how desperate circumstances are for the rest of the country."

Dollar stores, which sell any number of name-brand items, including snacks, toys and holiday decor, have been proliferating for years, particularly in impoverished and rural areas where they are often the only major retailers. The pandemic, though, ushered an influx of new shoppers -- including many who previously had been able to buy in larger, more cost-efficient quantities at big-box chains. But with smaller paychecks and rising prices, they say it's no longer feasible to stock up elsewhere.

Executives at Dollar General say they began seeing a rise in new customers last March, just as much of the country began shutting down because of the pandemic. Its newest shoppers tend to be younger, have higher incomes and be more ethnically diverse, according to spokeswoman Crystal Luce.

Dishman, 29, who works at a Vans outlet store in West Carrollton, Ohio, said his hours were nearly halved during the pandemic, from about 35 hours a week to 20. He's been picking up food-delivery gigs with Grub Hub, but has had to do away with trips to Kroger, where he used to spend about $150 every two weeks for his two-member household.

"Prices are going sky-high and my income is going in the opposite direction," he said. "That makes buying food, even at the dollar store, kind of rough."

There are more than 34,000 dollar stores in the United States, more than all Walmart, Starbucks and McDonald's businesses combined. The two largest chains -- Dollar General and Dollar Tree, which owns Family Dollar -- make up the vast majority of them, with more than 32,000 locations. Many are concentrated in lower-income areas, and analysts say it's increasingly common to see three, four and even five dollar stores within a few blocks of one another, making it difficult for smaller chains and grocery stores, which have thinner margins, to compete.

The pandemic has accelerated the dominance of the country's largest retailers, like Walmart, Amazon, Kroger and Target, to the detriment of small and regional operations. That dynamic, analysts say, has been pronounced in small towns across the country. Major chains have been better positioned to handle supply-chain disruptions, rising costs and labor shortages.

Growing income inequality, economists say, also has led to rising polarization among retailers. Discount chains and high-end retailers have in many cases fared much better than their midrange counterparts.

Dollar General, which carries national brands such as Clorox, Coca-Cola, Hanes and Nestle, keeps costs low by renting in inexpensive parts of town and keeping stores thinly staffed, analysts said. The chain, which last year posted $33.7 billion in sales, also has tremendous buying power, allowing it to keep prices within a few percentage points of Walmart's, the world's largest retailer, according to Anthony Chukumba, an analyst at Loop Capital Markets.

"The formula for Dollar General is small, conveniently located stores with a lot of name-brand items and very sharp pricing," he said. "In tough economic times, we see folks trade down from grocery stores and convenience stores to dollar stores. With inflation pushing prices higher, we're starting to see that phenomenon again."