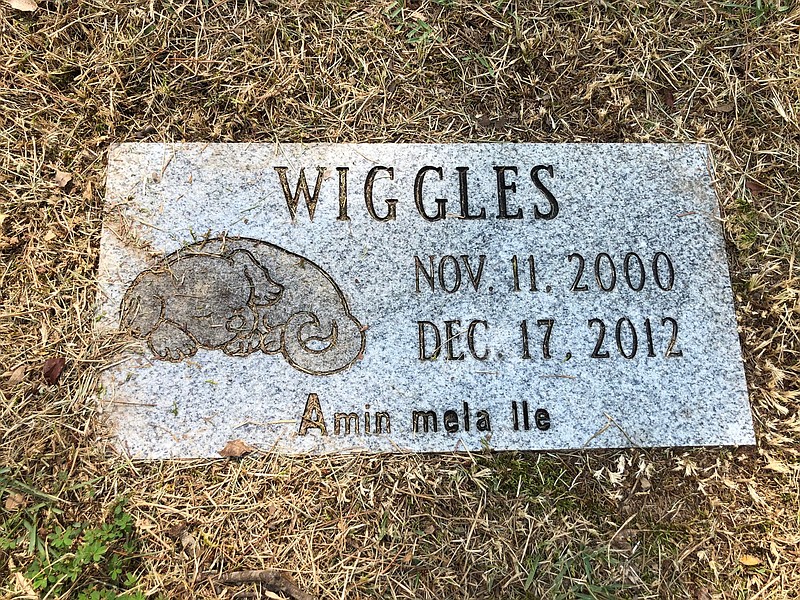 HOT SPRINGS — Benji was just a pup when Anthony Nicholson brought him home to North Little Rock from Hot Springs in 2015. The fuzzy, friendly little Maltese quickly became part of the family.

Benji was the second pet Nicholson had ever owned, "but he was the one that took my heart," and Benji grew up alongside Nicholson's son and daughter.

"He was so special to everybody," says Nicholson, a florist and funeral director at Superior Funeral Services. "He was very smart. His personality was wonderful. He loved everybody and loved to play with kids."

When Benji died suddenly March 27, Nicholson was understandably distraught. Along with the sadness of losing a four-legged family member, Nicholson wasn't sure how to memorialize Benji. He didn't want his beloved pet to be cremated but wasn't sure of other options. His family told him that Benji deserved a proper funeral and burial.

At 1:30 p.m. April 11, services for Benji were held at Nicholson's church, pet-friendly Geyer Springs United Methodist in Little Rock. A procession then followed Benji, whose remains were carried by hearse in a small, pecan-wood casket, to Pet Lawn, a cemetery on the outskirts of Hot Springs dedicated solely to pets.

At Pet Lawn, just off East Grand Avenue and down the hill from where humans are interred at Crestview Memorial Park, a minister led prayers, bouquets of flowers were placed and Benji was laid to rest.

To Nicholson, paying tribute to Benji in this way was part of the grieving process and allowed him to honor the dog that brought him joy.

"Your pet is just like your family," he says. "He was my baby. He was a part of my kids' lives. Every time I visit Benji's grave, I feel more at peace."

It's a hot morning in late July and Kelly Sheeley sits at a table in a small meeting room in the offices of Hot Springs Cemeteries on Quapaw Avenue. Her dog, a sweet, sandy-colored Lhatese named Pippin, is here as well. (Lhatese dogs are part Lhasa Apso and part Maltese.)

Sheeley and her husband, Steve Pegram, are from St. Helens, Ore., about 35 miles outside Portland. They bought the business a little more than a year ago, after she retired from her job as a clerk at a commercial printing business. They weren't sure about leaving their money in the stock market and were looking for real estate opportunities when they learned about the cemetery business in Hot Springs and decided to give it a go.

"We didn't have any experience, we just jumped right in. It was one of those blind things," says Sheeley, who runs the outfit while Steve remains in Oregon, working as an emergency manager for the state for a while longer until he can join her here.

Pet Lawn is a perpetual care cemetery and covers about a half an acre, she says.

"That doesn't sound very big, but pet interments are not like humans. They're not very big."

"And that's without expansion. We can expand that area. We have more than enough room."

Visitors enter the cemetery under a metal arch that says "Pet Lawn." Traffic from nearby Grand Avenue can be heard, and the space sits in the shadow of Crestview. A statue of St. Francis of Assisi, the patron saint of animals and ecology, stands on a stone pedestal and the grass is neatly mowed.

Many of the markers lie flat on the ground; some have images of a cat or dog. Some have photos of the pet; others are adorned with bright new plastic flowers.

You are my love,

"For every animal of the forest is mine."

There are markers that date to the '80s, but Sheeley says she doesn't know exactly when the cemetery was established.

One large stone with the names Chuckles and Ginger has dates of 1933-1939 and 1979-1997. Shelley believes the earlier pet had been cremated and its ashes were buried later.

Kristin Cypret of North Little Rock was in her 20s when she got Lilah Mae, a black Shih Tzu.

"She was just the best companion," Cypret says. "She was a really sweet dog, a woman's best friend."

When 13-year-old Lilah Mae died on March 10, Cypret, besides being bereft at the loss, didn't know what to do with her remains. Cremation wasn't appealing, and though her father has some property where Lilah Mae could have been buried, "the thought of him potentially moving and not being able to visit her really bothered me," she says.

An online search turned up Pet Lawn. A friend of Cypret's reached out to Sheeley and took care of the arrangements, which included a hard plastic, pet-sized container that Lilah Mae was buried in (urns for ashes are also available).

"It had a pretty fabric in the bottom, and they made a little corsage that was buried with her and also one for me to keep. I was just really grateful," Cypret says.

The service was simple, with Cypret, her husband, Tanner, and a friend.

"It's up to you how you choose to mourn and grieve," Cypret says. "Some people are fans of options like cremation where they can take their pet's ashes with them, or maybe they have property they know they can always visit. But when you don't have that, I think this is a great option."

Beginning in the '90s, Judy Frindik and her husband, Paul, of Maumelle have had three Dobermans — Cajun, Chili and Cayenne — and two greyhounds — Boof and Royal — interred at Pet Lawn.

A third greyhound, Asia, died the Saturday before Memorial Day and has been cremated but not yet buried, Judy says.

"We like the idea of having a memorial, a marker [for our pets]," she says. "And we like going to Hot Springs, so it's convenient to stop and visit."

When their times come, the Frindiks will be nearby. The couple have secured plots for themselves at Crestview, though Judy says Paul jokes that he really wants to be buried down the hill with their dogs.

Resthaven Pet Cemetery is on Southeast J Street in Bentonville and is operated by the Rogers branch of the Lowell-Phillips Co., which owns Benton County Memorial Park and Funeral Home in Rogers as well as a crematory and a pet crematory.

Resthaven, which was started in the '80s, is about a half acre, says funeral director Kelly Lowell.

"We offer pet cremation, and about 95% of people do that. Burials in Resthaven are maybe 20 a year," he says. "Even though we handle pets, it's not our primary business. Pets are something we do as an extra thing."

The vast majority of animals buried there are dogs, Lowell says.

At least two other pet cemeteries appeared in research for this article, but attempts to contact them were fruitless. A phone number connected to Moran Memorial Pet Cemetery in Fort Smith is no longer in service, and a text and voicemail messages sent to numbers associated with Thelma Holford Pet Cemetery in Jonesboro were not answered before press time Friday.

Abby Burnett of Kingston is the author of the 2014 book "Gone to the Grave: Burial Customs of the Arkansas Ozarks, 1850-1950" and knows a thing or two about Arkansas cemeteries.

"I don't think the concept of [pet cemeteries] goes back that far in Arkansas," she says.

Hartsdale Pet Cemetery and Crematory in Hartsdale, N.Y., has been around since 1896 and is perhaps the oldest in the country, Burnett says. Another unique pet-related spot is the Key Underwood Coon Dog Cemetery, established in Cherokee, Ala., in 1937, where all the dogs are certified raccoon-hunting dogs, she says.

Burnett, an avid dog and cat lover, notes that there are instances of pets being buried in human cemeteries. A pair of identical gravestones that sit next to each other at Greenwood Cemetery in Hot Springs are for W.Y. and N.C. Lane's infant daughter, who died Aug. 14, 1904, and for Our Dog Trip, who died Aug. 29, 1904.

At Aldrich Cemetery in Cleburne County, Burnett says, there are two small, flat markers for Sam, 1986-1998, and Katie, 1986-2003, a pair of hunting dogs buried in the Reedy family plot. A concrete marker for Papy, believed to be the dog owned by the superintendent of the Rohwer Relocation Center, the WWII Japanese internment camp, is near the camp's cemetery, Burnett says.

"Pet cemeteries make me weepy, but I still go to them," Burnett says. "I find them incredibly moving. Any inscription on an animal's grave just gets to me. From what I've read on headstones, there is so much raw emotion, as there would be for a human. I'm surprised there aren't more pet cemeteries."