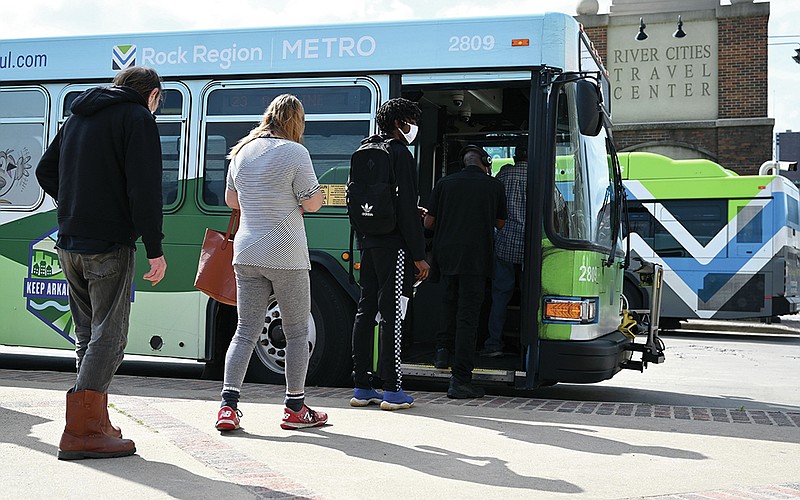 FILE - People wait in line to board their bus at the River Cities Travel Center in Little Rock on Tuesday, March 9, 2021. (Arkansas Democrat-Gazette/Stephen Swofford)

The River Cities Travel Center, the main bus transfer hub in downtown Little Rock, opened 21 years ago this month at a cost of $4 million.

At its dedication in 2000, Keith Jones, the director of the Pulaski County transit agency at the time, called it the christening of a 20-year-old dream.

Rock Region Metro's latest director, Charles Frazier, has a new dream to redevelop the transfer hub to include a mix of commercial, residential, office and entertainment centered around a transit station, which he and other say will help foster a vibrant surrounding community as well as more development.

Rock Region began pursuing the project about two years ago, hiring consultants specializing in transit-oriented development projects around the United States to assess whether the River Cities Travel Center is ripe for redevelopment, especially given its location.

The consultants included a team made up of two separate national consulting firms, Wendel and Willdan, as well as the Arkansas firm of Crafton and Tull. They are working under a $140,000 contract. Wendel alone has participated in TODs in 40 states, according to Susan Sherwood, a principal at the firm and the manager for Rock Region's project.

They concluded that the project was a good candidate as a transit-oriented development project.

Their presentation noted that within a few blocks in either direction are a dozen surface parking lots totaling 427,000 square feet, the consultants say. Add that total to the square footage available at the transfer station and they say it all adds up to 462,000 square feet of space available for redevelopment.

Re-imagining the transfer hub as a "destination" will allow it to be a "catalyst" for further development, the consultants told the board. While they called the travel center an "unprecedented opportunity," they cautioned that a TOD is a "complex real estate venture."

And how to redevelop it remains a question that will take several months to answer, according to Frazier. Not to mention crafting a strategic partnership with the city and potentially seeking changes in state law that might be required.

In the first two options, Rock Region would move its headquarters and dispatch from its North Little Rock location to help anchor the new development.

The consultants discarded the third option to turn it over to private developers, noting, among other things, that achieving public objectives, such as expanding government service options downtown, would be less likely to happen.

To help narrow down, they recommended putting out a formal request for interest from developers and use that response to help settle on an option.

Bruce Moore, the Little Rock city manager who has a seat on the Rock Region Metro board of directors, said called the presentation "very exciting about the potential possibilities."

But just like the idea of the River Cities Travel Center, it likely won't happen overnight, he said.

Moore pointed to the Little Rock Police Department's $12.5 million mixed-use substation on West 12th Street that was created to help, in part, foster development in the corridor.

The mixed-use substation concept was conceived in 2006. It opened in 2014. But only now is the building on the cusp of having other tenants, Moore said.

The substation is "very close" to having UAMS, Southern Bancorp. and Philander Smith College as tenants.

Nicole Hart, a member of the board from North Little Rock and chief executive officer of Hartwood Strategies LLC, expressed concern over how safety is factored into the transit-oriented developments.

Sherwood, a principal at Wendal, said her firm practices "crime prevention through environmental design," a design strategy that she said "directly speaks to how you deter crime of any nature."

She said most public facilities have a "perceived criminal element to them," but when private development is added, it "deters bad behavior. It's activated, it's lit up, there's people everywhere.

"It's meant to be a densely populated city block, and those are the type of things that push that type of behavior out of this development."