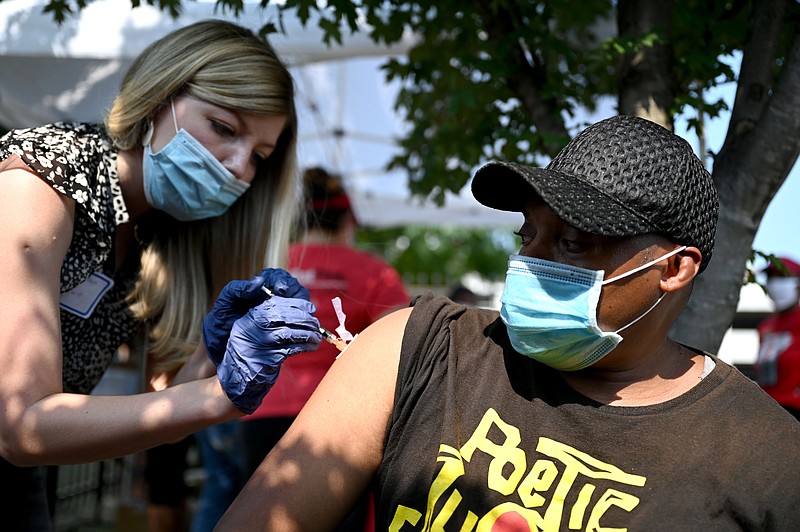 As the number of covid-19 patients in Arkansas' intensive care units set a new record when it rose by 17 to 558 Monday, two new weapons have been added to the arsenal to fight the disease.

U.S. regulators on Monday gave full approval to Pfizer's covid-19 vaccine, which eliminated one of the barriers cited by some as the reason they were reluctant to get vaccinated.

In addition, pharmacists across the state ramped up their contributions by offering monoclonal antibody treatments on-site to people testing positive for or exposed to coronavirus. The antibody treatment can reduce hospitalizations and weaken the virus's impact.

"Today's increase in hospitalizations, deaths, and ventilator use is a daunting reminder of the seriousness of the Delta Variant," Gov. Asa Hutchinson said on Twitter. "Now that the Pfizer vaccine is FDA approved, we should see vaccine acceptance increase."

Hospitalizations rose by 42 to 1,411, still short of the record set last week, but those requiring ventilators rose by 12 to 349, which was a record for the pandemic.

The state's death toll from the virus, as tracked by the Department of Health, rose by 30, to 6,704.

Another 986 new cases were added Monday, bringing the cumulative total to 436,242.

Case numbers are typically lower on Mondays because fewer people get tested over the weekend, Chief Medical Officer Jennifer Dillaha said. A week ago Monday, on Aug. 16, the state reported 856 new cases but then continued with four-digit days, with the highest reaching 3,549 cases on Thursday.

Meanwhile, the number of vaccine doses that providers reported having administered, including second doses of the Pfizer and Moderna vaccines, rose by 5,427 to 2,593,096.

Dillaha said in an email that the FDA's full approval Pfizer's vaccine should counter some vaccine hesitancy.

The approval means that the required clinical studies on the safety, efficacy, and duration of protection provided by the vaccine, as well as the studies related to the manufacturing and storage of the vaccine, have met the requirements for all vaccines licensed in the U.S.

"It is our hope that the approval of the Pfizer-BioNTech vaccine will help build people's confidence that the vaccine is truly safe and that it truly works," Dillaha said.

The number of individuals age 12 and over partially immunized fell by 1,178 on Monday to a total of 350,263, or 13.7% of that group. A message left for Katie White, the Health Department's deputy director of health communications, seeking an explanation for the fall was not returned as of late Monday.

There were 70,778 vaccine doses administered in the past seven days, 4,655 fewer than the prior week, when a total of 75,433 doses were administered.

Pharmacists in the state are now offering monoclonal antibodies treatments on site, an initiative that has been in the planning stages for the past three months, John Vinson, CEO of the Arkansas Pharmacists Association, said Monday.

Monoclonal antibodies are man-made proteins that act like human antibodies in the immune system that can specifically target a certain antigen. The treatment -- which has been used to treat covid-19 since the beginning of the pandemic -- has typically been administered in the hospital intravenously.

The antibodies treatment is now available through a subcutaneous injection, making it more widely available.

The state's nursing homes just last week started administering the monoclonal antibodies in both an injectable and intravenous form for symptomatic covid-19 patients.

Recruiting pharmacies to offer the treatment extends the reach of therapy to both metro and rural areas of the state, Vinson said.

"It's just like the vaccines; the more locations that you have in community settings, the more likely they are to get the treatment," Vinson said. "It's therapeutic and a preventative measure."

The antibodies treatment reduces the need for hospitalization of covid-19 patients by 70%, White said.

"The monoclonal antibodies will be of great assistance in preventing severe illness due to covid-19 and go a long way towards keeping people out of the hospital and reducing the stress on our healthcare system," Dillaha said.

The treatment option is being offered only in a handful of pharmacies at the moment, while others are preparing to offer it, Vinson said.

The monoclonal antibodies require a prescription from a doctor or nurse practitioner and can be administered within 10 days of the onset of symptoms, a positive covid-19 test or known exposure to the virus, Vinson said.

"Patients should expect to spend about an hour and a half at the pharmacy," he said.

The therapy includes four sequential injections -- one in the back of both arms and two shots in the abdomen. The patients must be observed for a minimum of one hour.

Galen Perkins, CEO of the Little Rock-based Express RX, said in an interview Monday said the monoclonal antibodies will be offered in all 30 of the company's pharmacies across eight southeastern states. The chain has 11 pharmacies in Arkansas.

"The idea is to slow the spread of covid-19," Perkins said of the initiative. "It speeds up your recovery and reduces your symptoms. This will free up some space in the hospitals."

Because of the time it takes to administer the therapy and because covid-19 positive patients will be treated, appointments are required, Perkins said.

Pharmacists, at the moment, are not receiving any extra funding to provide the monoclonal antibodies, which requires retrofitting the pharmacy sites to safely provide the treatment, Vinson said.

Earlier this month, the 15-member state American Rescue Plan steering committee appointed by Hutchinson approved an add-on payment of $1,000 per licensed bed to hospitals that administer the monoclonal antibodies in an outpatient setting.

Total hospital beds in the state -- whether filled or vacant -- fell by 28, going from 8,714 on Sunday to 8,686 on Monday, according to Health Department data.

The total intensive care beds, filled or vacant, remained the same at 1,121. Only 22 ICU beds were available Monday, which means that more than 98% of the special-care beds were full. The number available has been as low as eight in recent weeks.

The total bed capacity -- hospital beds that can be staffed whether or not they are occupied -- was at 8,651 on Monday, according to Health Department data. That number fell by 163 beds from 8,814 last Monday.

The maximum flex bed capacity, the number of beds at the hospital regardless of the facility's ability to staff them, was at 11,256, a dip of 138 beds from the previous week.

The Arkansas Valley saw the largest increase in covid admissions, going from 200 on Aug. 16 to 222 on Monday. The north central region saw the greatest drop, going from 123 covid-positive admissions to 93.

According to a Health Department report released Monday, the number of cases in Arkansas found to have been caused by the delta variant, which first emerged in India, rose by 732, from 2,165 on Aug. 14 to 2,897 on Aug. 23.

The number known to have been caused by the alpha variant from the United Kingdom rose by 57, to 763.

The Health Department also reported an increase from 45 to 56 in the number of cases found to have been caused by the gamma variant from Brazil.

Health Department data indicated that Pulaski County had the largest increase in total cases, with the count rising by 116.

Washington County had the next-largest increase, 88, followed by Benton County with 74.