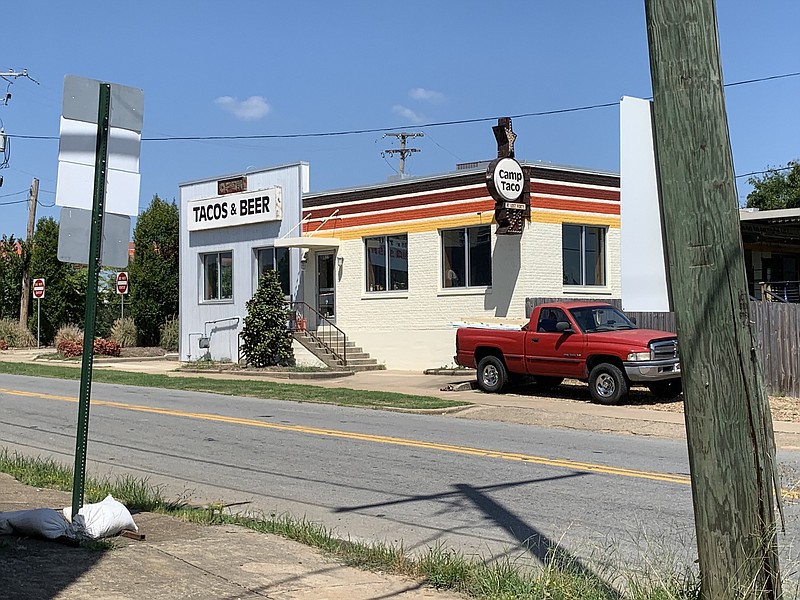 Dark Side Coffee Co. opened its new "lounge" location, in the former Angry Dave's Bicycles space at 3217 John F. Kennedy Blvd., North Little Rock. (Angry Dave's took over the building in January, the former home of Collector's Edition Comics. And before that, it was the city's first McDonald's.) They'll be roasting coffee on site and bringing in food (a recent post on Facebook — facebook.com/darksidecoffeecompany — depicts chicken salad on croissant, cinnamon rolls and red velvet, Italian cream and Ding Dong cakes) from Sherwood's Two Sisters Catering and Cafe. Hours are 7 a.m.-10 p.m. Monday-Saturday, 8 a.m.-8 p.m. Sunday. The phone number is (501) 541-4386; the website is dscoffee.co. And yes, the original drive-thru location in the parking lot of the North Park Mall, 4261 John F. Kennedy, remains open.

We're looking toward sometime in September as the target for the opening of Camp Taco, the latest project from Yellow Rocket Concepts, in progress in the East Village at 822 E. Sixth St., Little Rock, previously Sixth Street Brewing Co. (and before that, Rebel Kettle). The website, camptaco.com, describes it as "a new small-batch brewery project from the team at Lost Forty Brewing ... a place for play, snacks, live music and experiences to rival your best summer camp memories — with the addition of beer and tequila." It promises "experimental small-batch, taproom-exclusive beers, craft cocktails and margaritas, and elevated street tacos," on house-made corn and flour tortillas and from recipes conceived by Yellow Rocket partner/executive chef Scott McGehee. The place will also offer entertainment on a big outdoor stage. There's also a Facebook page: facebook.com/camptacobeer.

A sign on the door of Gusano's Chicago-Style Pizzeria, in the Pleasant Valley Shopping Center, 10700 N. Rodney Road, Little Rock, says it is temporarily closed because of plumbing problems. We should also note that there was a shooting early Friday outside the restaurant; police responded to a call about 1 a.m. and found a 32-year-old man with a gunshot wound in his stomach. A 34-year-old suspect was taken into custody. The shooting occurred while a private party was underway in the restaurant.

We're a little behind the curve on this one, but we have confirmation that Grady's Pizza & Subs, 10901 N. Rodney Parham Road, Little Rock, has closed permanently. A reader reported that the signs have been taken down. The restaurant had posted on July 10 on its still-up Facebook page (facebook.com/GradysRodneyParham) that it was "temporarily closed ... at this location while we quarantine. Unfortunately an employee has tested positive for covid-19." The location at 6801 W. 12th St. has remained open; hours are 11 a.m.-9 p.m. Monday-Saturday and the phone number is (501) 663-1918. The Rodney Parham restaurant's phone number, (501) 904-2822, transfers to the 12th Street location. Interestingly, the only mention of the original 12th Street restaurant on the website, gradyspizza-subs.com, is that its menu is listed under the "Menu" tab. There's not much information to be had of any kind at facebook.com/Gradys12thStreet.

Arsaga's at the Depot, 548 W. Dickson St. Fayetteville, a coffeehouse that opened in 1992 in, as the name reflected, a former train depot, closed Aug. 18. A sign on the front door announced the closing as well as the continuation of the business at its other locations (Arsaga's Mill District, Church & Center, Drive-Thru and University of Arkansas Law Library). It had reopened in May with a limited menu after being closed for more than a year due to the covid-19 pandemic.

And Fassler Hall, 311 E. Capitol Ave., Little Rock, will hold its annual Oktoberfest celebration, 11 a.m. Oct. 3, although it begins the preceding afternoon with "the first round of our beer pong tournament." The main event will feature live music and "some friendly competition, including stein-hoisting." To register for competitions, email sommer@fasslerhall.com. The phone number is (501) 246-4757; the website is fasslerhall.com.