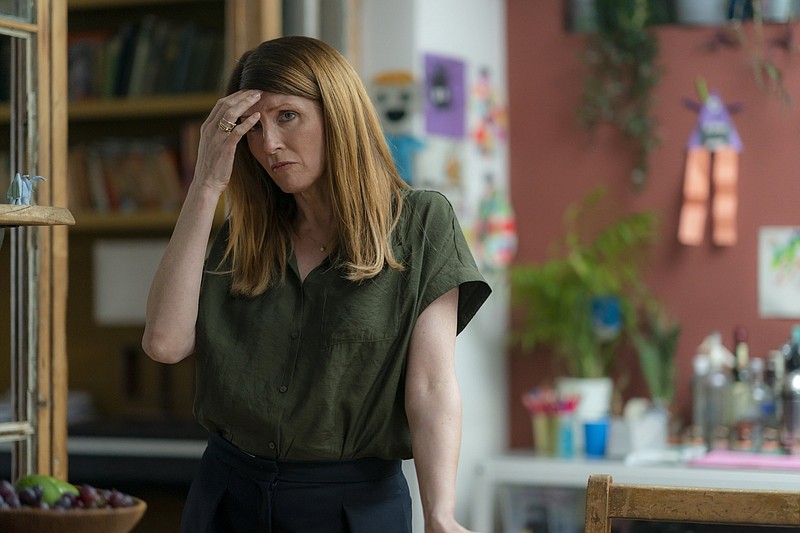 Bleeding-heart liberal “She” (Sharon Horgan) is stuck in covid-19 lockdown with a husband she knows she should have left long ago in Stephen Daldry and Justin Martin’s “Together.”

In a time of lockdowns, quarantines and isolation, a movie like "Together" may hit a little too close to home for some people. I can understand why those stuck indoors and looking to movies as a means of escape may find this claustrophobic drama suffocating and even a bit depressing. Covid-19 has run us through the physical and emotional wringer. So it makes sense why moviegoers would be reluctant to try a film that sets itself right in the heart of the global pandemic.

But "Together" shouldn't be tossed out as just another pandemic movie. It's true that it takes place during the U.K.'s coronavirus lockdown and there are numerous mentions of death tolls, infection rates and vaccinations. But at its heart, "Together" is about a marriage on the rocks. It's about a warring couple reassessing their relationship while confined inside of their London townhouse. It's combative, toxic and often unpleasant. But the real challenge for audiences won't be the film's nastiness. It will be the aggressive style of storytelling that forces the viewer to play a part in every scene.

"Together" pairs three-time Oscar-nominated director Stephen Daldry with esteemed playwright and screenwriter Dennis Kelly. Their prickly and often darkly funny character study was filmed in a single location over the course of 10 days during the pandemic. Their story literally begins on March 24, 2020, "the first day of national lockdown," and ends approximately one year later.

The film opens with a handful of news reports echoing new government restrictions and ushering in Britain's lockdown. From there we're introduced to a well-off London couple in their 40s who we only know as He and She (James McAvoy and Sharon Horgan --both brilliant). It only takes a few seconds to see that their relationship is strained and has been since well before the virus hit. In fact, their opening salvo of insults makes their disgust with each other pretty clear.

He: "The only thing that makes living with her even remotely bearable is knowing that I get to leave this house every day."

She: "I actually think of him as a cancer ... one of the really bad ones."

These kinds of acid-tongued barbs are scattered throughout Kelly's dialogue-heavy script. But not everything is so caustic. There's just as much self-satisfying needling and petty bickering as the two characters find all sorts of ways to unload years of resentment. Ultimately, He can't stand the sight of her. She hates being in the same room with him. They've stuck together this long for their 10-year-old son, Artie (Samuel Logan). But surviving a yearlong quarantine under the same roof? That's a whole different story.

While the quarrelsome couple have their heated one-on-ones, the vast majority of their conversations are with us, the viewer. Kelly's script makes us quite literally the third adult in the room, and over half of the movie sees McAvoy and Horgan breaking the fourth wall and speaking directly to the camera. At different times throughout the film's 91 minutes we're asked to be the couple's silent mediator, therapist and confidant. It adds an unexpected intimacy, but it also puts us right in the middle of some pretty fiery exchanges.

Take whenever the conversation turns to politics. She's an outspoken liberal who works with refugees and is quickly triggered by any opposing point of view. He is a proud conservative who loves talking about how hard he had it growing up yet casually demeans anyone making minimum wage. He calls out her rabid socialism and takes shots at her communist mother. She happily points out his list of hypocrisies while mocking his inability to coherently describe the business he owns (something he calls a "boutique consultancy"). It makes you wonder how they ever got together in the first place.

All of that may sound unbearable, but over time the hateful sparring takes a different tone. Instead of constantly being at each other's throats, we begin to see cracks in the couple's hardened exteriors as the lockdown affects them both in different ways. Their mutual contempt begins softening, only to be replaced by feelings of fear, isolation and despondency. It doesn't necessarily make the movie easier to watch, but it brings new dimensions to the characters and adds some much-needed layers of humanity.

While Kelly's script begins by using the lockdown to introduce his two characters, the film's second half sees him turning the tables and using his characters to comment more openly on the pandemic. Sometimes it's trivial things like the toilet paper shortage. But other times you can sense Kelly's anger as he takes to task the government for its costly failures.

Nothing captures the film's fury quite like She's experience with her ailing mother. Her mom is put in a nursing home just as the pandemic starts, but later catches the virus after the government decides to move covid-positive patients into elderly care facilities. Later we watch as She gives a heart-wrenching account of having to watch her mother's final breaths over FaceTime. That's the kind of maddening hard-to-swallow truth that will make "Together" resonate with some while alienating others.

Rating: R, for some sexual references and language 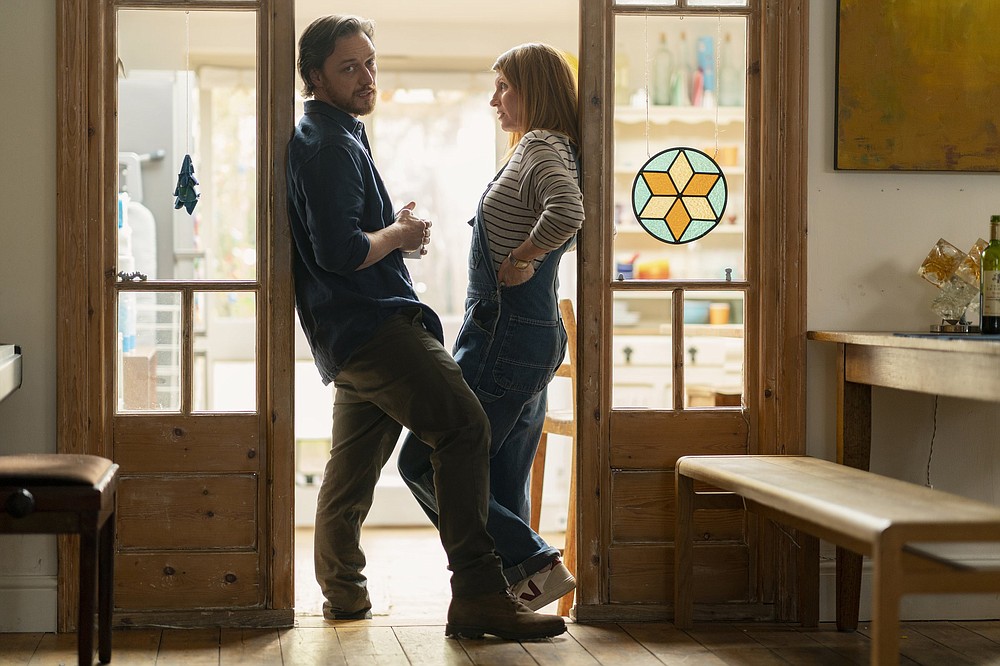 An unhappily married couple (James McAvoy and Sharon Horgan) find themselves thrown together during the U.K.’s restrictive lockdown during the early days of the covid-19 pandemic in “Together.”