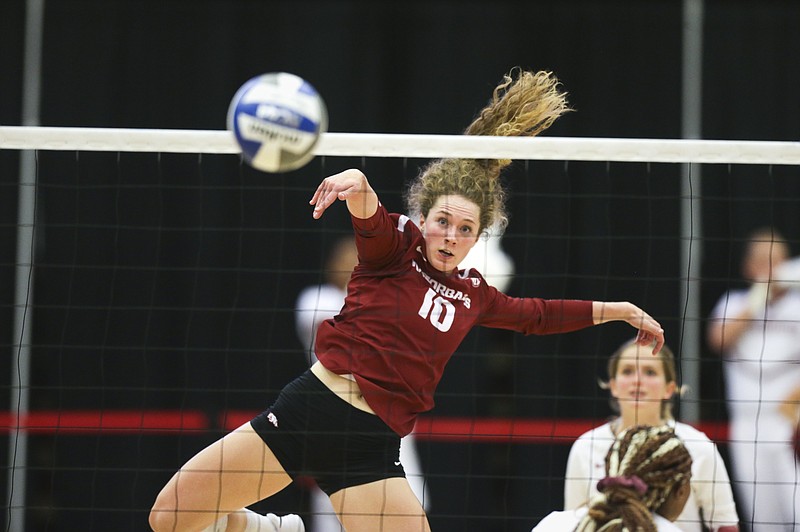 UALR (3-0) broke free from a seesaw battle that went for more than two hours with three consecutive points in the fifth set for a 12-9 lead. Momentum swung the Trojans way when a coach's challenge turned a 10-9 deficit into a one-point lead.

Laure Jansen's attack was initially ruled out, but UALR Coach Van Compton challenged, claiming it touched an Arkansas player. Video confirmed it did, and the Trojans grabbed the lead for good.

Arkansas (2-1) pulled within one twice, but Taylor Head's swing went long and the Trojans celebrated their first win over Arkansas in school history. It is also UALR's first win over an SEC team since 2013.

Compton, who is beginning her 34th year as the Trojans coach, said her players haven't had time to grasp how important the win was for the program.

"I told them in the huddle, 'I don't think I've ever taken a set off of Arkansas.' This is history for us," said Compton, whose 542 career wins rank 24th among active coaches. "I don't know that they've digested the magnitude of it yet, but I have."

She pointed out that the challenge going the Trojans' way was enormous.

"It was huge," Compton said. "Kinda like in the set before when the challenge went their way and then they beat us."

Laura and Laure Jansen were a potent 1-2 punch for the Trojans. Laura Jansen, a 6-0 senior and first-team All-Sun Belt outside hitter, led the way with a team-high 22 kills, while Laure Jansen, a freshman who is not related to Laura, added 21 kills and a match-high 20 digs.

Nicole Medlin, a 6-0 sophomore middle blocker from Fort Smith, was also a force at the net with seven blocks (one solo).

"I think at the end of the day we ran out of time there in the fifth, but I don't know if that was the defining moment," Watson said. "I feel like we had chances and chances and chances, and we never capitalized on the chances that we had and they did.

"They exploited some things that they should. And we weren't able to likewise, nor were we able to stop that. And at the end of the day, that's where it falls apart for us."

The Razorbacks climbed back to even the match at two sets each with surges in sets three and four. They rallied from a 9-6 deficit in the fifth and looked to have the lead, but the challenge went against them.

Serving was an issue all weekend for Arkansas, which finished with 45 service errors in three matches -- including 14 against the Trojans.

"What's frustrating is we spend an enormous amount of time on it, and we get out here and we're serving, ending our own runs at times," Watson said.