Fauci: Open to speeding up boosters

He says 100,000 deaths foreseeable by December if vaccine hesitance persists by Compiled Democrat-Gazette Staff From Wire Reports | August 30, 2021 at 6:56 a.m. 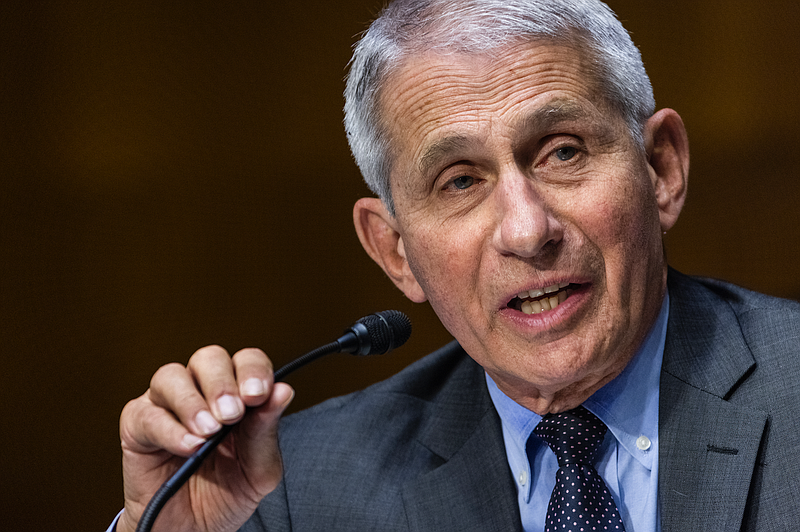 In this May 11, 2021, file photo, Dr. Anthony Fauci, director of the National Institute of Allergy and Infectious Diseases, speaks during a hearing on Capitol Hill in Washington. (Jim Lo Scalzo/Pool Photo via AP, File)

Dr. Anthony Fauci said Sunday that the door is open to administering booster shots in the U.S. sooner than eight months after a completed covid-19 vaccination, a possibility that President Joe Biden has raised.

"We're still planning on eight months. That was the calculation we made," Fauci, Biden's chief medical adviser, said on NBC's "Meet the Press." However, "we're totally open to any variation in that based on the data," he added.

Fauci also said he favors requiring shots for schoolchildren as "a good idea" for the U.S., where only people 12 years and older are eligible for vaccination.

"This is not something new," he said on CNN. "We have mandates in many places in schools, particularly public schools," for diseases such as polio, measles, mumps, rubella and hepatitis.

U.S. health officials have outlined a schedule of administering additional doses after eight months, starting Sept. 20, as vaccine efficacy weakens over time. Last week, Biden wondered publicly if the gap between doses could be shorter.

"Should it be as little as five months?" the president asked during an appearance with Prime Minister Naftali Bennett of Israel, a country that is aggressively rolling out booster shots. "That's being discussed," he said, adding that he had talked to Fauci about it.

[Video not showing up above? Click here to watch » arkansasonline.com/830faucinbc/]

The administration needs clearance from the Centers for Disease Control and Prevention to proceed on boosters, as vaccination experts continue to debate the value and impact of extra doses. The White House quickly clarified its stance, saying the plan hasn't changed even though Biden's interest in a rapid rollout is clear.

In the U.S., 820,000 booster shots have been administered since Aug. 13, when those with compromised immune systems became eligible, according to CDC data.

Fauci said he was concerned that another 100,000 people could die from covid-19 by December because so many Americans are refusing to take the shots. About 637,000 U.S. deaths have been blamed on covid since the pandemic began early last year.

"What is going on now is both entirely predictable, but entirely preventable," Fauci said on CNN's "State of the Union." "We have about 80 million people in this country who are eligible to be vaccinated, who are not yet vaccinated."

"That's why it's so important now, in this crisis that we are in, that people put aside any ideological, political or other differences, and just get vaccinated," he added.

In the meantime, however, the schedule for vaccine experts on the Advisory Committee on Immunization Practices to consider the plan is slipping. Booster shots were supposed to be the main topic of discussion at an Aug. 24 meeting that was delayed to today. Now that postponed meeting will mainly be focused on consideration of Pfizer Inc. and BioNTech's vaccine that got full regulatory approval last week.

"We'll hear substantially less on Monday about the booster doses," said William Schaffner, a Vanderbilt University infectious disease expert and nonvoting committee member. "It's really quite clear that the basis for the licensure of the vaccine will take up most of the time."

[Video not showing up above? Click here to watch » arkansasonline.com/830fauciabc/]

The Biden administration has its hands full as it tries to control the spread of the delta variant and address vaccine hesitancy. But with less than a month until the proposed booster launch date, the administration still needs clearance from the Food and Drug Administration and a recommendation from the CDC to proceed.

Vaccination experts continue to debate the value and impact of booster doses. The CDC published three studies last week showing that messenger RNA vaccines continue to provide strong protection against hospitalization from the virus, even as efficacy at preventing infections has waned somewhat in the face of the highly infectious delta variant. Also, Johnson & Johnson, maker of the only single-dose vaccine authorized for U.S. use, reported last week that a booster dose raised levels of covid antibodies ninefold.

But important questions remain about what such findings mean for individual protection and for larger issues such as preventing transmission and the rise of new variants. There's a bit of a cart-before-the-horse problem with the booster dialogue, said Jesse Goodman, a professor of medicine at Georgetown University and former FDA chief scientist.

"There's so much data still missing on the booster issue," he said. "In order to have a really informed discussion, we need to have the data."

Booster plans in the U.S. and other countries have been decried by global health leaders calling for more equitable distribution of doses. Dozens of countries have such limited access to the vaccines that they have immunized less than 10% of their populations. World Health Organization Director-General Tedros Adhanom Ghebreyesus said the divide will only grow larger if wealthy countries like the U.S. prioritize booster shots.

The delays and date changes for the advisers' meeting have added to ongoing speculation among health experts that the administration is rushing ahead without enough data and regulatory oversight. It's still unclear why boosters have been pursued, as there isn't enough convincing data to suggest that everyone needs one, said Paul Offit, director of the Vaccine Education Center at the Children's Hospital of Philadelphia.

"Knowing that the ACIP [Advisory Committee on Immunization Practices] was going to be meeting next week, my understanding was that it would become clear -- that the data from which that recommendation was made would be presented and that there would be a vote on whether the CDC agrees with the Biden administration's direction," he said. "But from the ACIP agenda, it doesn't look like that's true."

[Video not showing up above? Click here to watch » arkansasonline.com/830booster/]

In a White House briefing last week, Surgeon General Vivek Murthy pushed back on the notion that the administration was preempting regulators, saying it would follow the normal protocols. The booster program's early announcement was made to be transparent with the public and ensure that states and localities have enough time to plan, he said.

Whether or not the data are there now, the question is not if people will need boosters, but when, said Arnold Monto, an epidemiologist at the University of Michigan's School of Public Health and the acting chairman of the FDA's Vaccines and Related Biological Products Advisory Committee. Infections among vaccinated people show that standard regimens aren't sufficient to stop the spread of delta, Monto said.

Israel on Sunday extended its booster shot campaign to all citizens ages 12 and older amid a surge of delta variant infections that has made the number of new daily cases among the highest in the world.

After a remarkably swift vaccination campaign in the winter and spring, about 80% of Israel's adult population has been inoculated with at least two doses of the Pfizer-BioNTech vaccine administered three weeks apart.

But a new study by Israeli experts points to a waning of the vaccine's protections over time for all ages, a finding that contributed to a U.S. decision to begin offering booster shots to Americans starting next month.

And a nationwide study of people older than 60 completed by Israeli experts in late August demonstrates that a third shot provides significant extra protection against both infection and severe illness.

Israel began offering third booster shots Aug. 1 to people ages 60 and older who had received a second shot at least five months earlier. The country rapidly expanded the program to include Israelis ages 30 and older. About 2 million Israelis, or half of those in the eligible groups so far, have already received a third shot.

"This is a privilege that no other country has," Bennett said Sunday, announcing the further expansion of the program to those ages 12 and older.

A preliminary study released this month by Maccabi, an Israeli health care provider, found that a booster shot of the Pfizer vaccine was 86% effective against infection in people older than 60, a week or more after receiving the third dose.

After meeting Bennett at the White House on Friday, Biden suggested that the U.S. government might offer coronavirus vaccine booster shots sooner than eight months after a second shot, underscoring the administration's concerns about the spread of the delta variant.

As Fauci stressed that the administration would for now stick with the plan to offer booster shots eight months after the second dose, he said that plan is flexible and could change with new information.

"That's the plan that we have, but we are open to data as they come in," he said.

Information for this article was contributed by Ian Fisher, Yueqi Yang and Fiona Rutherford of Bloomberg News (WPNS/TNS) and by Isabel Kershner of The New York Times.