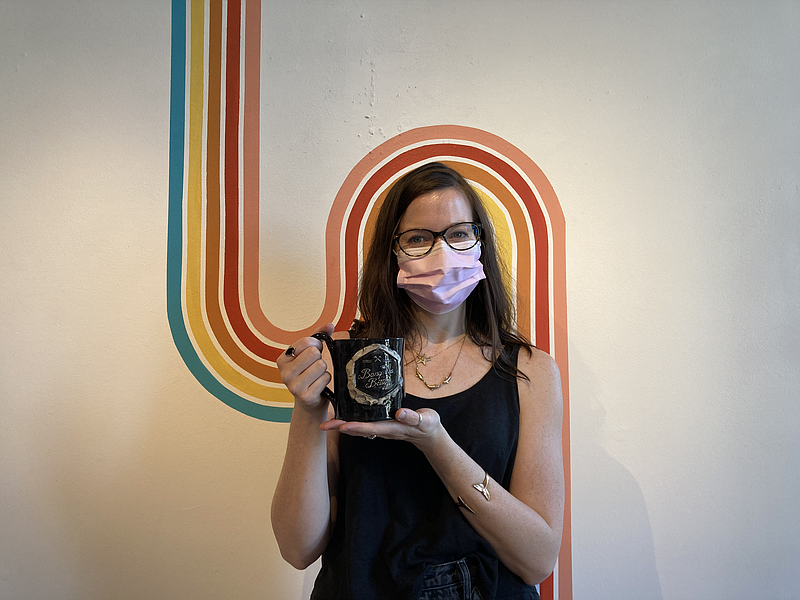 Stacey Bowers began making jewelry long before she started a business called Bang-Up Betty, and her newly opened Argenta storefront is a testament to how far the business has come in the past eight years.

Bang-Up Betty, a jewelry business based in Bowers’ North Little Rock home, began in 2013, when she wanted to make funny gifts for her friends, even though she never liked wearing jewelry. (This has now changed: she wore a few pieces from the Seven Seas Collection during the interview.)

She learned how to make jewelry when she worked at Argenta Bead Company, but taught herself how to hand-stamp her signature snarky phrases. Those first pieces, made on Bowers’ apartment floor, were cuff bracelets bearing acronyms of swear words.

Bowers originally posted her work on Facebook just to show what she had made, but started an Etsy shop when people wanted to buy her jewelry, and it just kept growing. She got her own website, then started doing pop-ups at local businesses and craft shows. Now, Bang-Up Betty is a national operation, fulfilling individual and wholesale orders across the United States.

“I ship stuff all over the country now. But I've just got such a base of supporters in Arkansas, and it's nice to be supported by my community.”

Even though Bang-Up Betty has been featured by national publications such as Cosmopolitan, Buzzfeed and Bustle, Bowers is loyal to her hometown of North Little Rock. She creates most of her pieces at her home in the city, opened her storefront at 429 Main St. on Saturday morning, and sells North Little Rock merchandise, including a sweatshirt and stickers emblazoned with the words “Stop being a snob about coming to North Little Rock.”

Although Bowers only sold stamped jewelry for a while, she has expanded her repertoire, frequently taking jewelry classes and learning new skills. She now does bronze casting, silversmithing, soldering and works with precious metal clay. Now that she has a wider skillset, Bowers said she views jewelry as more of an art form, and that shines through in her recent Greek mythology, art history and sea creature collections, formally titled the Siren, Gallery and Seven Seas collections.

“I've definitely evolved. When I first started, I think it was really based in humor. And at the time, I was a writer, and so words were really important to me, they still are. And I liked working with words, so the hand stamping was mainly what I did,” she said. “And then I was really inspired by what was going on in the world as far as activism goes. I've made a lot of pieces that sort of take a stand and honor people like Ruth Bader Ginsburg.”

Some of the activism-based pieces include jewelry, stickers and enamel pins bearing the phrases “Smash the patriarchy,” “Science is real” and “Voting is my superpower.” She even sells a necklace inspired by Ginsburg’s famous dissent collar.

These pieces are proudly displayed online, on Bang-Up Betty’s social media and at the newly-opened storefront. Bowers said having the store will make it easier for her to coordinate with customers or attract new ones, because people can come to the store, rather than going on the website, finding her at a festival, searching for a specific piece at a local boutique like Moxy Modern Mercantile or picking it up somewhere else.

The shop is an “explosion of rainbows and happiness,” filled to the brim with Bang-Up Betty jewelry, stickers, pins and other merchandise, as well as sweary candles, gifts inspired by Greek mythology and even a custom tea blend made by Abbi’s Teas and Things.

Shelf space that isn’t used for the unique, colorful and clever items for sale holds art by Bowers’ friends and favorite artists, and the mostly-white space is accented by a painted rainbow running up and across the walls.

For anyone still wondering who the mysterious Betty is, he was Bowers’ cat. Sadly, he died in 2019, so he will not be making an appearance at the new store.

But the business has still continued to grow, and Bowers is looking toward the future.

“I'm just going to keep learning more and evolving and making the kind of jewelry that I love, which is interesting and fun and beautiful,” Bowers said. “And as far as the store goes, I'm thrilled to have a place to finally showcase it all in this setting with all this beautiful light and all of these fun and quirky gifts and art. So it just feels like the perfect setting to finally be able to show the jewelry off.”