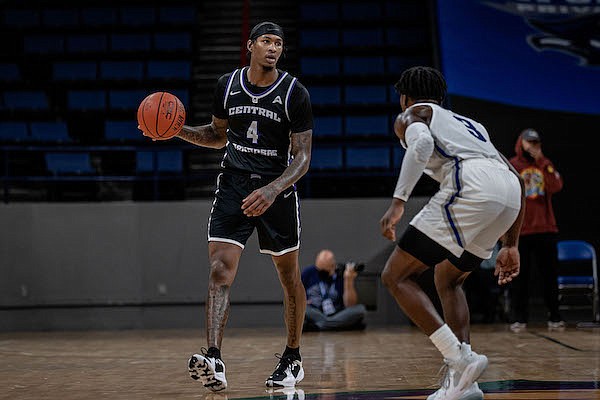 FAYETTEVILLE -- Four seasons after Darious Hall was a key freshman reserve on the University of Arkansas' 2018 NCAA Tournament team, he'll be back at Walton Arena.

This time Hall will be playing for the visiting team.

Hall, a 6-7 redshirt junior forward who played at Mills High School in Little Rock, is starting for the University of Central Arkansas, which plays the No. 10 Razorbacks at 7 tonight.

"It's going to be fun, and it's going to be an experience to remember coming back and playing in Bud Walton against the Razorbacks," Hall said. "My family is going to get to see me play there again.

"Before, I heard 'Woo, Pig, Sooie,' and I was playing for the Hogs. Now it's going to be the opposite.

"I don't think I'll get booed by the fans. But if they do, it'll just be more fuel to my fire."

In Hall's final game at Arkansas, he had 4 points, 4 rebounds and 2 steals in 22 minutes in Butler's 79-62 victory over the Razorbacks in a first-round NCAA Tournament game at Detroit.

"We were really happy with how Darious played as a freshman," said Matt Zimmerman, a former Arkansas assistant coach and director of operations who is now the color analyst on the Razorbacks' radio broadcasts. "He had some huge games for us."

Hall had 14 points and 11 rebounds against Ole Miss, 13 and 7 against Texas A&M, and 11 and 7 against Tennessee. He had seven games in which he scored 10 or more points.

"The staff here was high on him and we were counting on him in the future," Zimmerman said. "We thought he'd be one of our main guys for the next three years. We were surprised when he made the decision to leave. We hated to see him go."

Hall transferred to DePaul, a Big East school in Chicago where he redshirted and played two years. He then transferred to UCA, where he has two seasons of eligibility after the NCAA added a year for athletes in all sports because of the coronavirus pandemic.

"Darious has been great for us," Bears Coach Anthony Boone said. "He brings a great energy to the team. He brings a lot of enthusiasm, a lot of encouragement.

"He just goes out and plays, and that attitude has spread to some of our other guys, too."

Hall had career-highs of 19 points and 16 rebounds along with 2 assists and 2 steals in UCA's 70-67 victory over Oral Roberts, which made the NCAA Tournament Sweet 16 last season before losing to Arkansas.

"He was really skying and getting above everybody and grabbing rebounds all around the basket," Boone said.

Hall also had 10 points, 10 rebounds and 2 assists in UCA's 92-47 loss at defending national champion Baylor, which is ranked No. 4.

"Hall is a great athlete," Arkansas Coach Eric Musselman said. "He runs the floor for them and is an excellent rebounder as far as his position. Very active."

Musselman, in his third season at Arkansas, said he watched all of the Razorbacks' game tapes from the two seasons prior to taking the job, so he saw Hall.

"I watched him when he played at DePaul, too," Musselman said. "He plays with great energy. I have a lot of respect for how hard he plays."

Hall said he decided to transfer to DePaul because he wanted to experience living in another state and play in a major city.

"It was just something I wanted to do with myself as far as seeing something else," he said. "Growing up in Arkansas, I wanted to see something different.

"[The move] was to work on my game and be in Chicago. It was good. The only thing I had a problem with is that it was cold. Like, painful cold."

"As far as growing as a player, it helped me," he said of playing for DePaul. "But in some ways I felt it kind of hurt me because it slowed me down, the playing style.

"Playing in the Big East, it was more of a slow-paced thing. In the SEC, it was faster."

Hall faced Anderson and St. John's in four games and averaged 7.7 points and 5.4 rebounds. He twice scored 11 points, which matched his high with DePaul.

"I knew I had to bring it in those games," Hall said of facing Anderson and St. John's. "It was a good experience, and we always talked afterwards.

"There's still love between me and Coach Anderson and Coach Cleveland."

Having graduated from DePaul with a communications degree, Hall said he decided to enter the transfer portal after Dave Leitao was fired as the Blue Demons' coach.

"My time was up at DePaul," he said. "I knew I wanted to be closer to my family, because they weren't able to see me at DePaul a lot.

"So playing for an in-state school was a big thing for my recruiting when I went into the transfer portal."

"Man, it's been great," Hall said of playing for Boone. "I love him. He's taken me under his wing like a son."

Arkansas has lifted a long-standing policy of not scheduling in-state schools, which makes it possible for Hall to make his return to Walton Arena with UCA.

"My emotions and feelings are going to be high," Hall said. "But I really just want to keep my focus on trying to win the game rather than trying to prove something or anything like that."