RECIPES: Cut back on cleaning with these three one-pot meals (doing the math right) 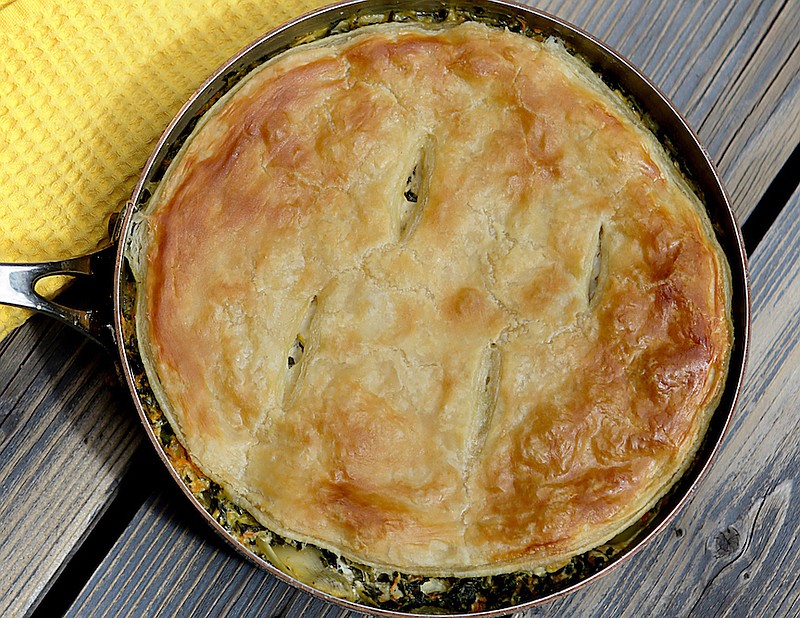 I was about halfway through making a one-pot meal of shepherd's pie when I suddenly realized that my one-pot meal required the use of three pots.

This was a problem, because I was writing a story — this story — about one-pot meals. But I learned something from the experience. I learned that people who write about food sometimes are not very good at math, such as counting to three.

And it's not like the recipe came from an unreliable source. I don't want to name names, but the website that touted shepherd's pie as a one-pot recipe rhymes with "Nood Fetwork."

But today's story, as we have established, is about one-pot meals. These are meals that are made entirely in a single pot, which cuts down considerably on what I consider the monstrous chore of having to clean up after cooking dinner.

That is one advantage to one-pot meals. Another is that they are often quite good, presumably because the flavors blend organically together. Sometimes they are even better than quite good. And occasionally they are absolutely spectacular.

I began with beef goulash, largely because of the scene in "Christmas in Connecticut" in which S.Z. Sakall turns Una O'Connor's Irish stew into goulash by adding half a can of paprika. But even Sakall's goulash could not have been as rich and satisfying as the one I made.

You begin with chuck roast — I used the less-tender top round, because the price of beef has skyrocketed — that braises for about three hours in a robust sauce. It's the sauce that makes the dish so memorable; it's made from roasted red peppers, more onions than you would imagine, carrots, tomato paste, vinegar and nearly as much paprika as Sakall used.

It all comes together in an aromatic, deep red stew. It's a stick-to-your-ribs kind of meal, comforting as well as filling.

But egg noodles require a second pot. People who write about food sometimes are not very good at math.

Next, I made a dish that genuinely does cook in just a single pot. It's a chicken pot pie, but it's different from any chicken pot pie I've ever had.

Instead of the usual veloute sauce (a light roux mixed with chicken stock) blended with mixed vegetables, chicken and cream, the filling of this pot pie takes a more flavorful route.

It starts with spinach, which is made creamy by the addition of Boursin cheese; that's the familiar soft, white, spreadable cheese with garlic and fine herbs. Artichoke hearts are added, along with capers, chicken and lemon zest, which brings a wonderful brightness to the whole dish.

And it also has chicken stock and a little flour — but not made into a roux — cream and mixed vegetables, because some traditions are worth keeping.

Naturally, it's topped with a lovely and tempting round of puff pastry. There are not many things in life that cannot be improved with a little puff pastry.

My final dish is wonderful for brunch, simple and impressive, though it does take some time to make.

At its heart, Fried Eggs with Parmesan and Potato Rosti is just hash browns (the shredded, fried kind) topped with sunny-side-up eggs and a hearty sprinkling of salty parmesan cheese. What could be better than that?

Rosti is the Swiss version of a potato pancake. The potatoes are shredded lengthwise and fried in butter in a single layer all the way across the pan. That way, you end up with a single, 12-inch potato pancake or hash brown.

Once the rosti is placed on a platter, the same skillet is used to fry all the eggs at the same time. They, too, cover the entire bottom of the pan, and they slide out and onto the potatoes as a single unit.

It's fun to make, and it's heavenly to eat. Make sure you keep the yolks runny, so they infuse the potato pancake with their golden goodness.

All three recipes are adapted from "The Complete One Pot: 400 Meals for Your Skillet, Sheet Pan, Instant Pot, Dutch Oven and More" from America's Test Kitchen. 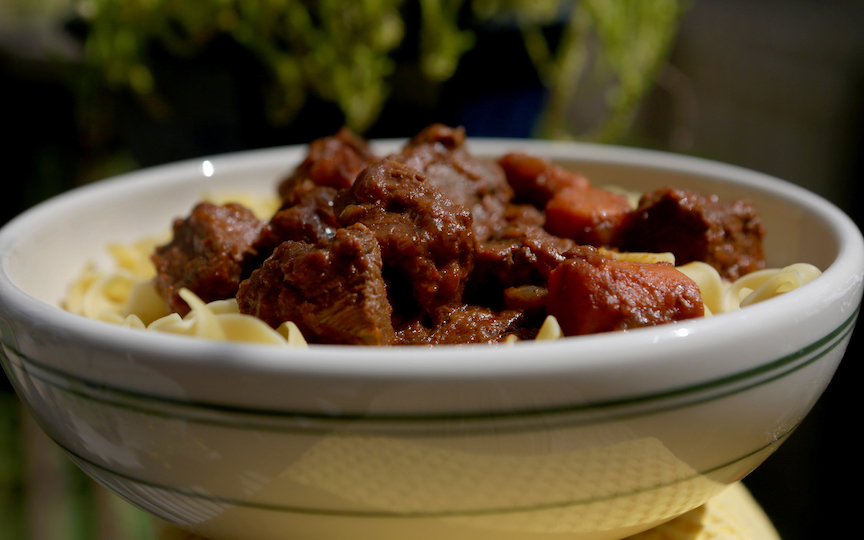 Sprinkle beef with 1 teaspoon salt. Process red peppers, paprika, tomato paste and 2 teaspoons of the vinegar in food processor until smooth, 1 to 2 minutes, scraping down sides of bowl as needed.

Combine onions, oil and remaining 1 teaspoon salt in Dutch oven. Cover and cook over medium heat, stirring occasionally, until onions soften but have not yet begun to brown, 8 to 10 minutes. (If onions begin to brown, reduce heat to medium-low and stir in 1 tablespoon water.)

Stir in pepper mixture and cook, uncovered, until onions begin to stick to bottom of pot, about 2 minutes. Stir in beef, carrots and bay leaf and use rubber spatula to scrape down sides of pot. Cover, transfer to oven and cook until beef is almost tender and surface of liquid is ½ inch below top of meat, 2 to 2½ hours, stirring every 30 minutes.

Stir in broth, if needed, until surface of liquid measures ¼ inch from top of meat (beef should not be fully submerged). Cover and continue to cook until beef is tender, about 30 minutes.

If desired, prepare noodles according to package directions and serve goulash over noodles. 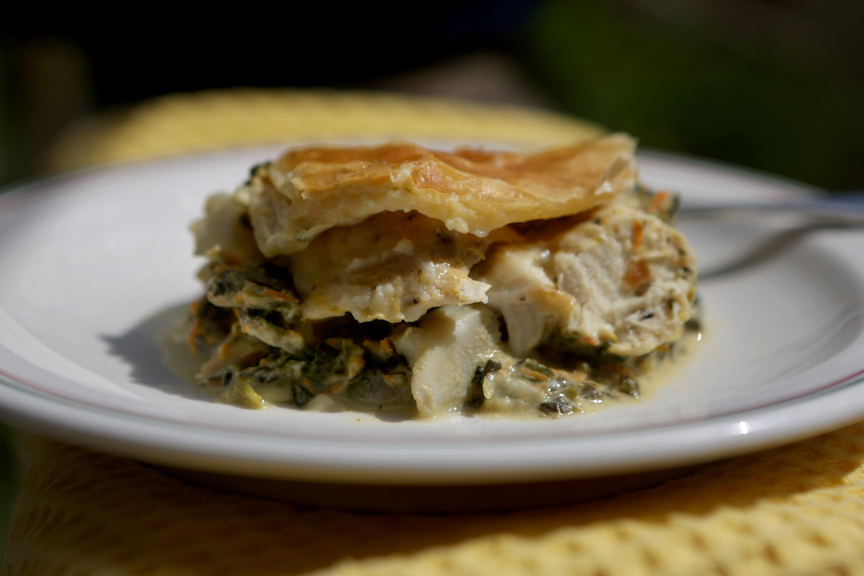 Combine spinach, Boursin, artichokes, carrots, broth, cream, capers and Wondra together in a bowl, then transfer to prepared dish or pan.

Toss chicken with lemon zest, salt and pepper and spread in even layer over the spinach mixture. Cut puff pastry to fit over dish or pan and place over top of chicken. Cut 4 (2-inch) slits in center of dough, then brush dough with egg mixture.

Bake until crust is golden brown and filling is bubbling, 30 to 35 minutes, rotating dish halfway through baking. Remove pot pie from oven and let cool for 10 minutes before serving.

Note: Wondra is a brand of instant flour that has been finely ground, cooked and dried. It prevents sauces from clumping. You can substitute ordinary all-purpose flour for the Wondra; the taste will be the same but the sauce may have a pasty, slightly gritty texture. 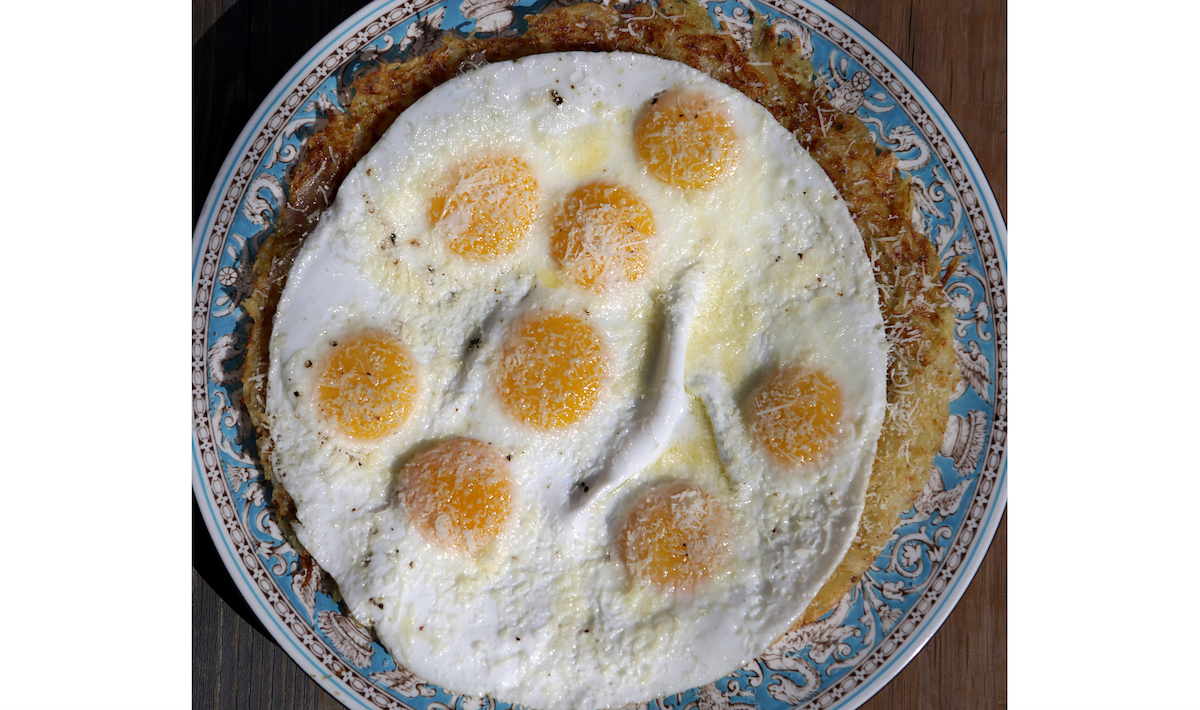 Peel and shred potatoes lengthwise using the large holes on a box grater.

Wipe bowl dry. Place one-third of potatoes in center of a dish towel or several layers of paper towels. Gather towel ends together and twist tightly to squeeze out as much moisture as possible. Transfer potatoes to now-empty bowl and repeat process with remaining potatoes in 2 batches. Sprinkle cornstarch, ¾ teaspoon of the salt and half of the pepper over potatoes. Using hands or fork, toss ingredients together until well blended.

Melt 2 ½ tablespoons of the butter in 12-inch nonstick skillet over medium heat. Add potato mixture and spread into even layer. Cover and cook for 6 minutes. Uncover and, using spatula, gently press potatoes down to form round cake. Cook, occasionally pressing on potatoes to shape into uniform round cake, until bottom is deep golden brown, 8 to 10 minutes.

Shake skillet to loosen rosti and slide onto large plate. Add 2 ½ tablespoons butter to skillet and swirl to coat. Invert rosti onto second plate and slide rosti, browned side up, back into skillet. Cook, occasionally pressing down on rosti, until bottom is well browned, 8 to 10 minutes. Transfer rosti to cutting board and let cool slightly while making eggs. Wipe skillet clean with paper towels.

Crack eggs into 2 small bowls, 4 eggs per bowl, and sprinkle with remaining salt and black pepper. Heat oil in now-empty skillet over medium heat until shimmering. Add remaining 1 tablespoon butter to skillet and quickly swirl to coat skillet. Working quickly, pour 1 bowl of eggs in 1 side of pan and second bowl of eggs in other side. Cover and cook for 2 minutes.

Remove skillet from heat and let sit, covered, about 2 minutes for runny yolks (white around edge of yolk will be barely opaque), about 3 minutes for soft but set yolks and about 4 minutes for medium-set yolks. Slide eggs onto rosti, sprinkle with parmesan cheese and season with salt to taste. Cut into wedges and serve.