Wolves’ Hatcher elects to move on 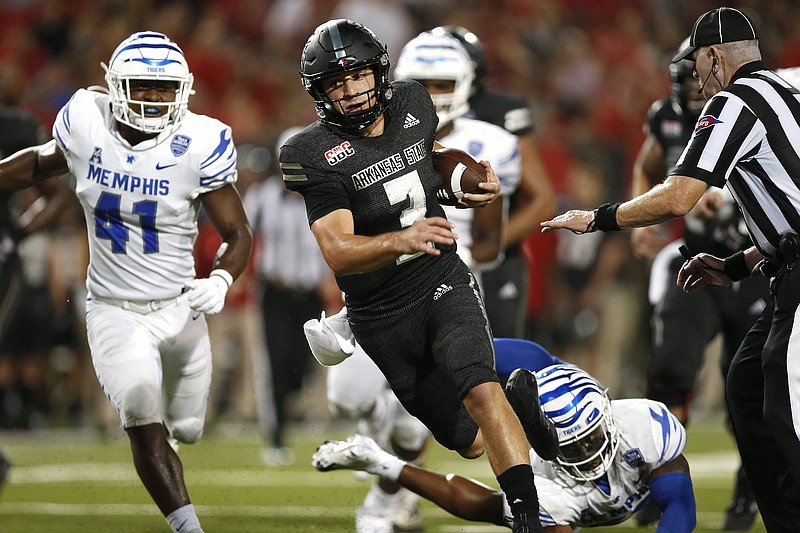 Layne Hatcher didn’t begin 2021 as Arkansas State University’s starting quarterback. And he won’t be the starter in 2022, either.

Hatcher announced Wednesday morning that he is entering the transfer portal after three seasons with the Red Wolves, leaving Jonesboro with two seasons of eligibility. The Little Rock native came to ASU in 2019 after spending one year at Alabama as a walk-on and ranks fourth on the Red Wolves’ career list with 7,427 passing yards to go with 65 touchdown passes.

“Thank you to Arkansas State,” Hatcher wrote on social media. “I have loved my time here with these coaches and players and will be forever grateful to this place!”

Hatcher declined to comment further, but his father, Greg, told the Arkansas Democrat-Gazette that it was a “gut-wrenching decision.”

Although Florida State transfer James Blackman began the 2021 season as the Red Wolves’ starting quarterback, but he entered midway through ASU’s opener against Central Arkansas, completing all 12 of his passes for 150 yards and 4 touchdowns in a comeback victory.

Hatcher started the following week, yet was replaced by Blackman in the second half against Memphis. He didn’t take meaningful snaps again until Blackman suffered a shoulder injury against Coastal Carolina on Oct. 7.

“Layne Hatcher is an incredible human being,” Jones said after ASU’s season opener Sept. 4. “It just shows you, things didn’t turn out the way he wanted to — and we spoke about it — but he’s a great competitor.”

Jones declined to issue a statement on Hatcher’s decision, in line with his policy of not commenting on outgoing transfers.

Statistically, 2021 was the worst of Hatcher’s three seasons with the Red Wolves. His 13 interceptions were one more than in the previous two seasons combined and he averaged a career-low 7.1 yards per attempt while completing 58.9 percent of his passes — down from 65.8 and 59.8 in his first two seasons, respectively.

Following a prolific high school career at Pulaski Academy — where he helped the Bruins to four state football championships while throwing for a school-record 15,483 yards and 185 touchdowns and also won three individual wrestling titles — Hatcher went to Alabama to play for Coach Nick Saban

There he served as an understudy to future NFL quarterbacks Jalen Hurts, Tua Tagovailoa and Mac Jones while the Crimson Tide went 14-1 en route to an SEC championship and a College Football Playoff runner-up finish.

Hatcher then made the most of his first season at ASU, starting nine games and winning Sun Belt Conference Freshman of the Year with 27 touchdowns and nearly 3,000 passing yards. His 65.8 completion percentage was the second-best in school history and he ranked seventh nationally in yards per attempt.

In 2020, Hatcher rotated series with Logan Bonner, yet still threw for 19 touchdowns and more than 2,000 yards.