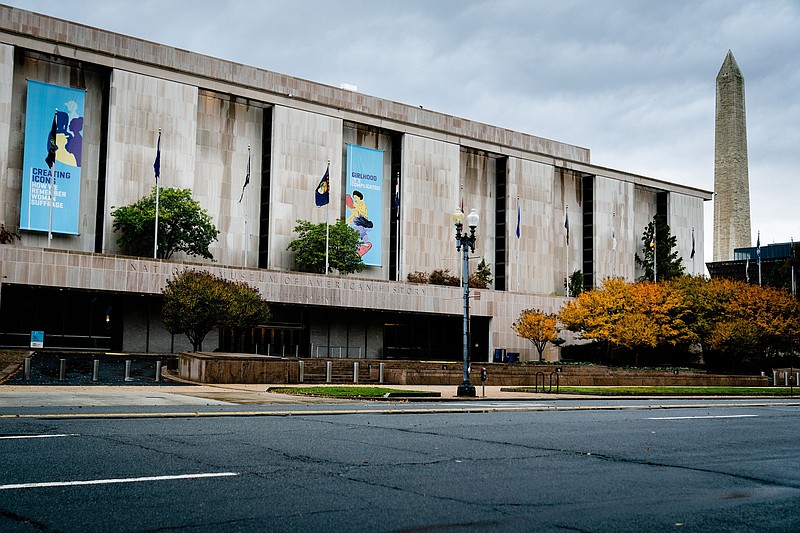 National Museum of American History in Washington holds nearly 2 million irreplaceable artifacts in the museum — part of the Smithsonian Institution, whose buildings are extremely vulnerable to flooding. Some could eventually be underwater. (The New York Times/Erin Schaff)

Nearly 2 million irreplaceable artifacts that tell the American story are housed in the National Museum of American History, part of the Smithsonian Institution, the biggest museum complex in the world. Now, because of climate change, the Smithsonian stands out for another reason: Its cherished buildings are extremely vulnerable to flooding, and some could eventually be underwater.

Eleven palatial Smithsonian museums and galleries form a ring around the National Mall, the grand two-mile park lined with elms that stretches from the Lincoln Memorial to the U.S. Capitol.

But that land was once marsh. And as the planet warms, the buildings face two threats. Rising seas will eventually push in water from the tidal Potomac River and submerge parts of the Mall, scientists say. More immediately, increasingly heavy rainstorms threaten the museums and their priceless holdings, particularly since many are stored in basements.

At the American History museum, water is already intruding.

It gurgles up through the floor in the basement. It finds the gaps between ground-level windows, puddling around exhibits. It sneaks into the ductwork, then meanders the building and drips onto display cases. It creeps through the ceiling in locked collection rooms, thief-like, and pools on the floor.

Staff members have been experimenting with defenses: Candy-red flood barriers lined up outside windows. Sensors that resemble electronic mousetraps, deployed throughout the building, that trigger alarms when wet. Plastic bins on wheels, filled with a version of cat litter, to be rushed back and forth to soak up the water.

So far, the museum's holdings have escaped damage. But "we're kind of in trial and error," said Ryan Doyle, a facilities manager at the Smithsonian. "It's about managing water."

An assessment of the Smithsonian's vulnerabilities released in October reveals the scale of the challenge: Not only are artifacts stored in basements in danger, but floods could knock out electrical and ventilation systems in the basements that keep the humidity at the right level to protect priceless art, textiles, documents and specimens on display. 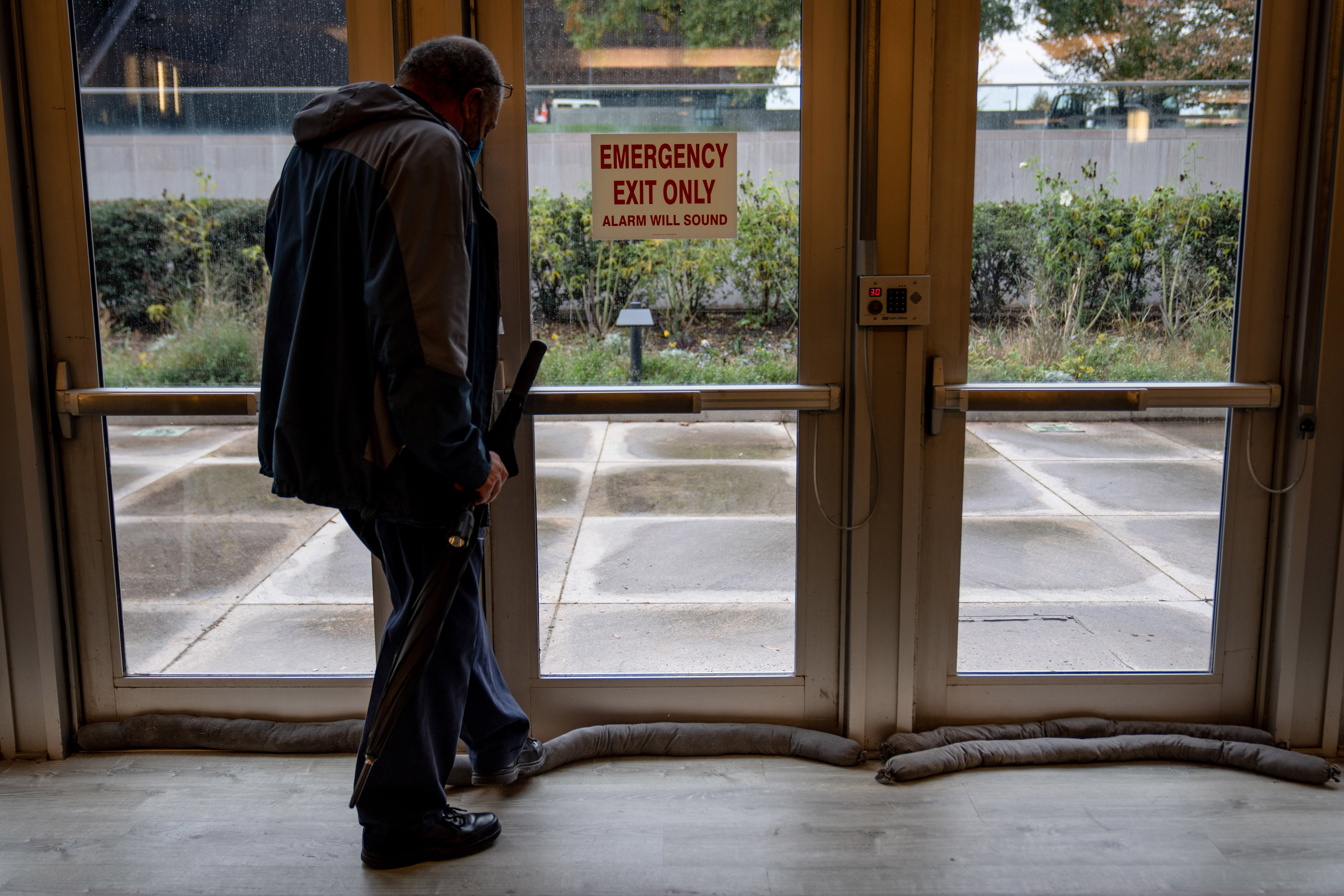 Mark Proctor, the building manager for the National Museum of American History in Washington, checks small water barriers at entrances of the museum on Nov. 12. Eleven Smithsonian museums and galleries form a ring around the National Mall. But that land was once marsh. And the buildings face two threats: Rising seas pushing in water from the Potomac River and submerging parts of the Mall; and increasingly heavy rainstorms threatening the museums and their holdings. (The New York Times/Erin Schaff)
MOST VULNERABLE

Of all its facilities, the Smithsonian ranks American History as the most vulnerable, followed by its next-door neighbor, the National Museum of Natural History.

Scientists at the nonprofit group Climate Central expect some land around the two museums will be underwater at high tide if average global temperatures rise by 1.5 degrees Celsius, compared with pre-industrial levels. The planet has already warmed by 1.1 degrees Celsius and is on track to rise 3 degrees by 2100.

Smithsonian officials want to build floodgates and other defenses and move some collections to a proposed site in suburban Maryland. But Congress has yet to fund many of those efforts, and the changes would take years to implement.

Until then, the Smithsonian struggles with this fact: An institution that is beloved by the public, well funded and staffed by top experts is protecting the nation's treasures with sandbags and garbage cans.

"We follow rain like you wouldn't believe," said Nancy Bechtol, head of facilities for the Smithsonian. "We're constantly watching those weather forecasts to know whether we've got one coming."

On a recent morning, a group of employees gathered in the entrance hall of the American History museum to point out the places where the water comes in.

The hall featured a wooden cotton planter used by a South Carolina tenant farmer. A Super Surfer skateboard ridden by Patti McGee, the first female professional skateboarder. The cream-colored Fender Esquire that Steve Cropper played when he recorded "(Sittin' On) The Dock of the Bay" with Otis Redding. 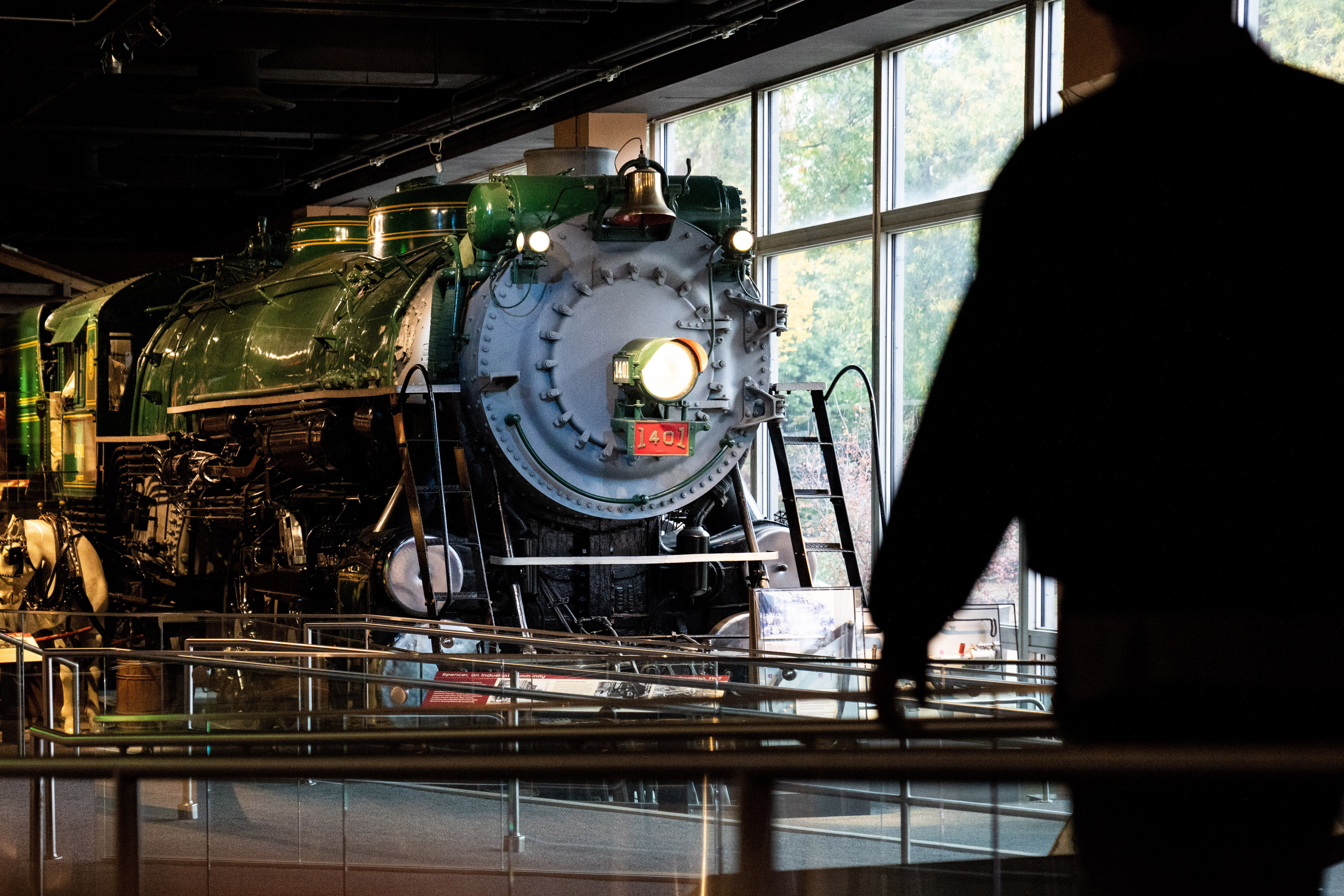 The Southern Railway 1401 train is on display at the National Museum of American History in Washington. The train sits by a window overlooking a garden that was flooded by a storm in March. When water came through the window and pooled around 1401’s wheels, officials had to vacuum it out, said building manager Mark Proctor. (The New York Times/Erin Schaff)
"Definitely, where we're standing could flood," Bechtol said.

She fears a massive storm that lingers — the way Hurricane Harvey smothered Houston in 2017, or Ida inundated New York this past summer.

The building manager, Mark Proctor, led the group to Southern Railway 1401, a towering steam locomotive made in 1926. The train sits by a window that looks out onto a garden on the building's east side. In March, a storm flooded the garden. Water came through the window and pooled around 1401's steel wheels.

"We had to [vacuum] the water out," Proctor said. Outside, staff pushed flood barriers against the windows to slow the water the next time it floods.

Proctor took a freight elevator to the basement, then entered a room that holds electrical and heating, ventilation, and air conditioning equipment that form the building's life-support system. Without it, the air would turn hot and humid, damaging the collections.

Proctor gestured to a wall. "That's where the water was coming into the building," he said, recalling the March storm. Nearby was one of the building's two emergency generators, which Proctor hopes to move to the fifth floor.

"Your generator's not going to work if it's in the water," he said. 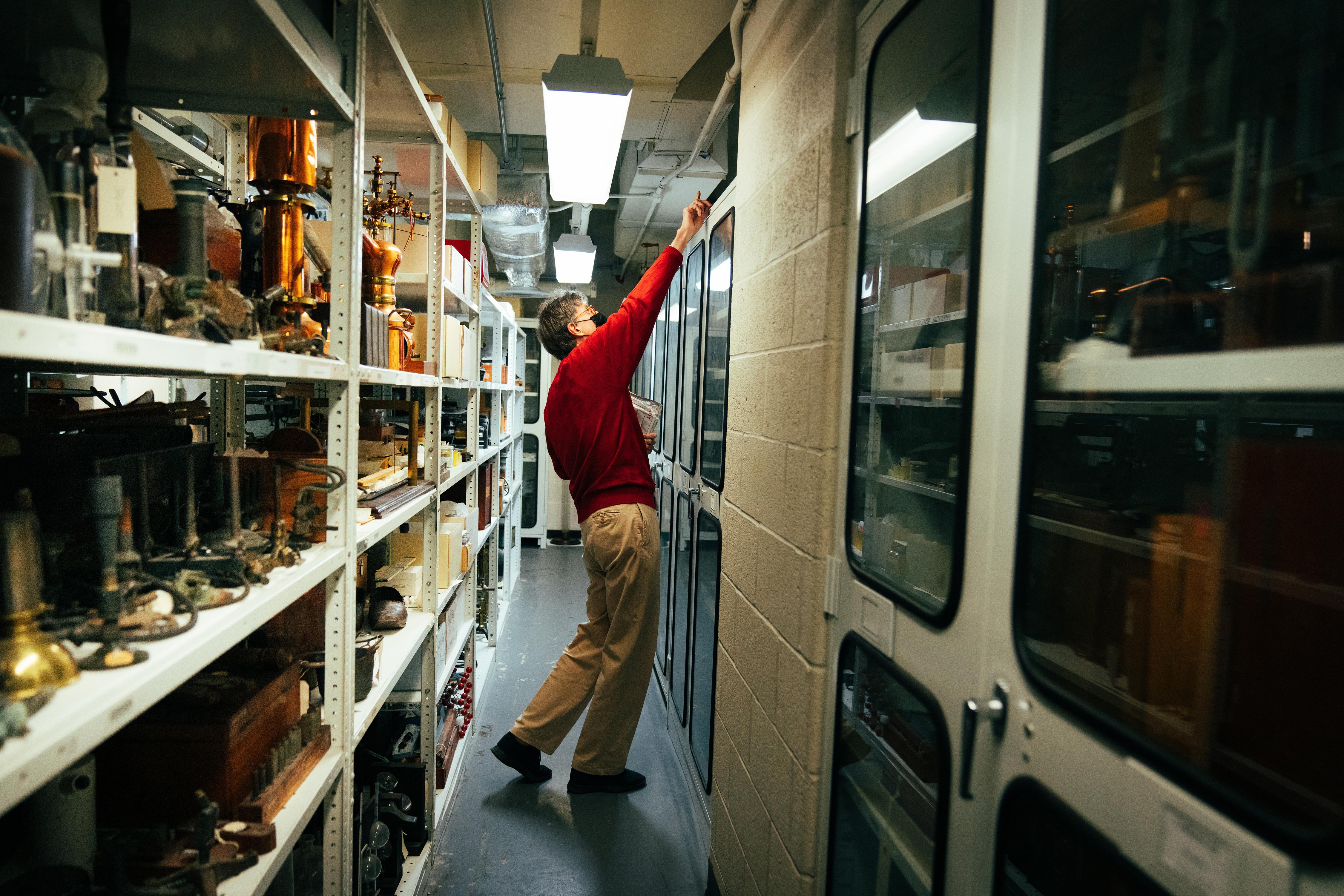 Robert Horton, an assistant director for collections and archives for the National Museum of American History in Washington, stands Nov. 9 in a room where artifacts are stored. (The New York Times/Erin Schaff)
INTO THE DANGER ZONE

Next to the mechanical room, Robert Horton stopped at a locked door. Horton is assistant director for collections and archives. His favorite item at American History is a homemade prosthetic leg made by a coal miner around 1950.

After passing his badge over an electronic sensor, Horton entered a small room with a low ceiling, packed tight with cabinets that held exquisite pieces of porcelain. "All the way back, to, you know, the invention of porcelain," he said.

When the building was opened in 1964, the basement was not designed to store collections, Horton said. But as the museum's holdings grew, it filled up.

Horton walked to the corner of the room where water had come through the ceiling during the March storm. Residue from the water was still visible.

Plastic sheeting had been draped atop one cabinet, positioned to direct leaks into a garbage can. Around it were dark squares of fabric, designed to absorb the water that the garbage can missed. "Since we're afraid that it may happen again, we've left a lot of the protective material in place," Horton said.

Down the hall, another chamber's shelves were stacked from floor to ceiling with boxes made of treated paperboard that Horton said were designed to repel water. They were filled with vaudeville scripts; the papers of Lenora Slaughter, who ran the Miss America pageant from 1941 to 1967; and records from the Depression-era Civilian Conservation Corps, including a box marked "Poems of the CCC."

Horton pointed out rows of boxes with documents about Father Charles Coughlin, whose 1930s radio sermons and weekly magazine were described as "instruments of antisemitism" in his New York Times obituary.

The boxes sat on open shelves, the lowest of which were barely off the floor. 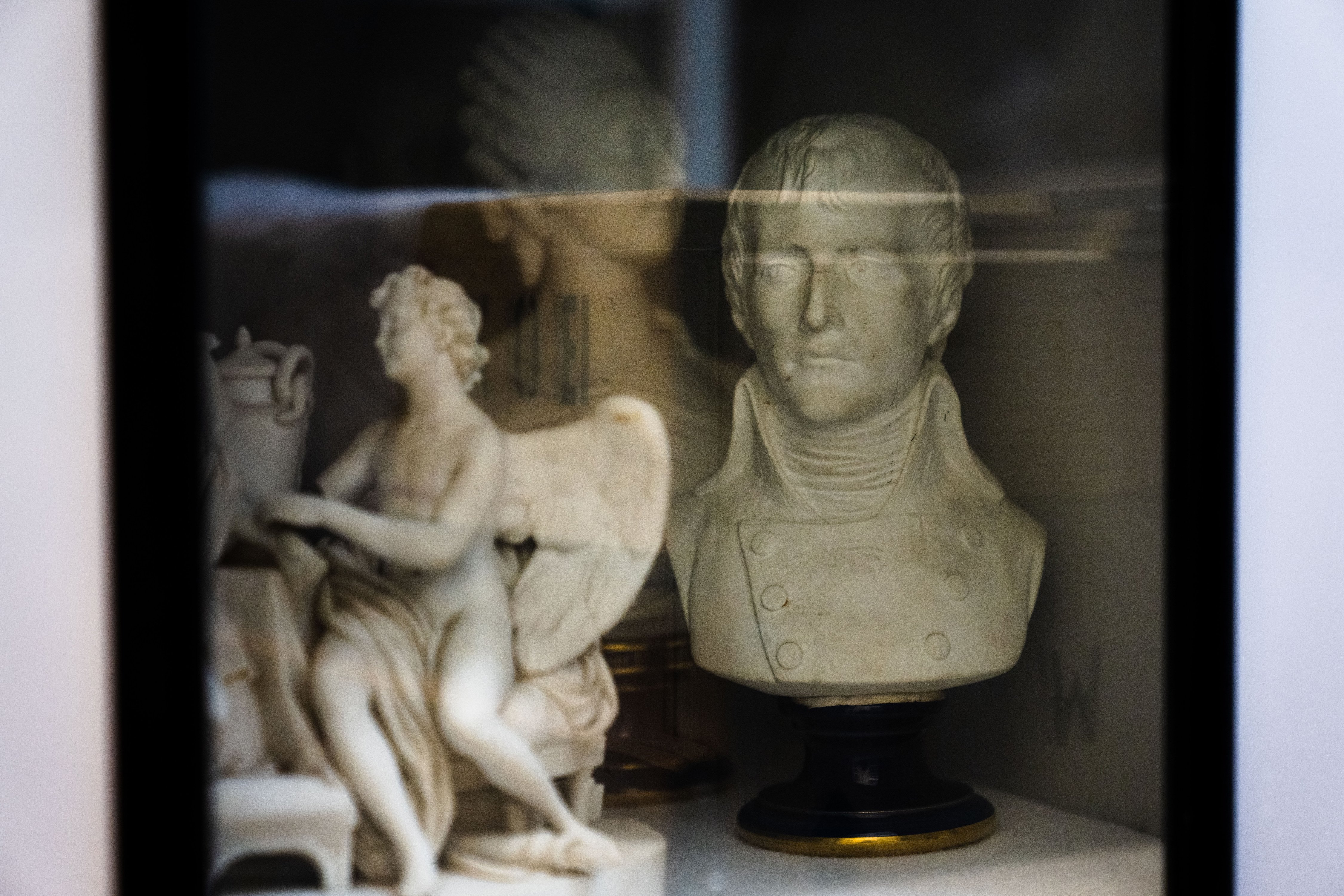 Some of the artifacts are at risk of flood damage at the National Museum of American History in Washington. (The New York Times/Erin Schaff)
WHO'S RESPONSIBLE?

In 2006, a storm left 3 feet of water on Constitution Avenue, which runs along the north side of the museum. Water pushed cars from the street onto the museum's lawn and poured into the building. In response, officials proposed ways to better protect the Mall, including a $400 million pump station.

None of those projects were built, in part because responsibility for controlling flooding on the Mall is split among several entities, including the National Park Service, the U.S. Army Corps of Engineers, the District of Columbia's water utility and the National Capital Planning Commission, said Julia Koster, head of public engagement for the commission.

"There's the need to kind of figure out who should lead the charge on this," Koster said.

The Smithsonian, which gets more than half of its funding from Congress and the rest from private sources, has repeatedly requested money from the government since 2015 to start work on a $160 million storage site in Suitland, Md., for items from the American History museum and the National Gallery of Art.

So far, the Smithsonian has put $6 million toward the new storage facility, taken from a larger pot of money earmarked for planning and design. Construction, which was originally supposed to be completed by 2020, has yet to begin.

The Smithsonian is seeking an additional $500,000 to begin work on a separate $39 million plan for flood walls and other changes to fortify the American History museum. That project is in early planning stages, said Linda St. Thomas, a Smithsonian representative.

Some other Smithsonian museums are further ahead. The National Air and Space Museum will install floodgates as part of a multiyear renovation expected to total more than $1 billion. The Mall's newest addition, the National Museum of African American History and Culture, was built with three massive pumps to keep its lower levels from filling with groundwater.

Meanwhile, the holdings at the American History museum await a solution.

"I don't want to rush," said Bechtol, noting that moving collections required not only planning and building a new facility but also carefully handling each item. "We can only really do so much, I guess, and do it carefully and do it well." 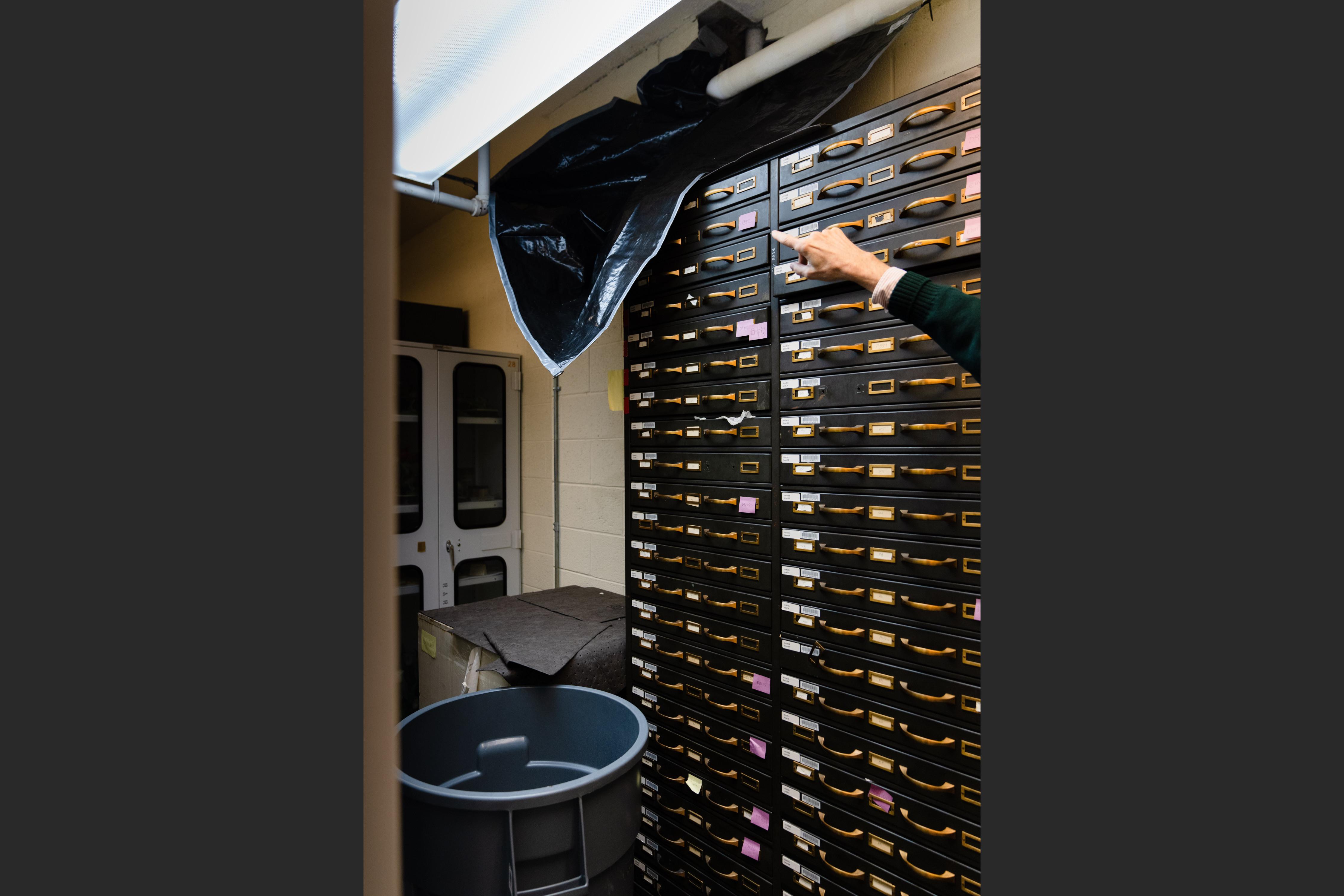 A previous leak is shown at the National Museum of American History in Washington. (The New York Times/Erin Schaff)
'LIKE A SWIMMING POOL'

The tour resumed, passing through a second mechanical room, where groundwater bubbled up through the lowest point in the floor, even though it was not raining. The history museum sits on what used to be the Tiber Creek, which was filled in during the 1800s.

The group emerged into a cafeteria, where floor-to-ceiling windows look out on a quiet garden at the foot of a 35-ton Alexander Calder sculpture. That section of the museum is below street level. The garden slopes up toward 14th Street, forming a giant bowl that fills with water when it rains.

"Right now, it just comes right in," said Bechtol, who wants to build a wall around the garden to keep water out. "It's like a swimming pool."

The tension between protecting the collection and keeping it accessible to the public will not go away in a museum built atop a marsh. "For us, the best kind of museum is a closed box with no windows, no doors," Doyle said, perhaps only half-jokingly. "It doesn't work too well when you're trying to get visitors."