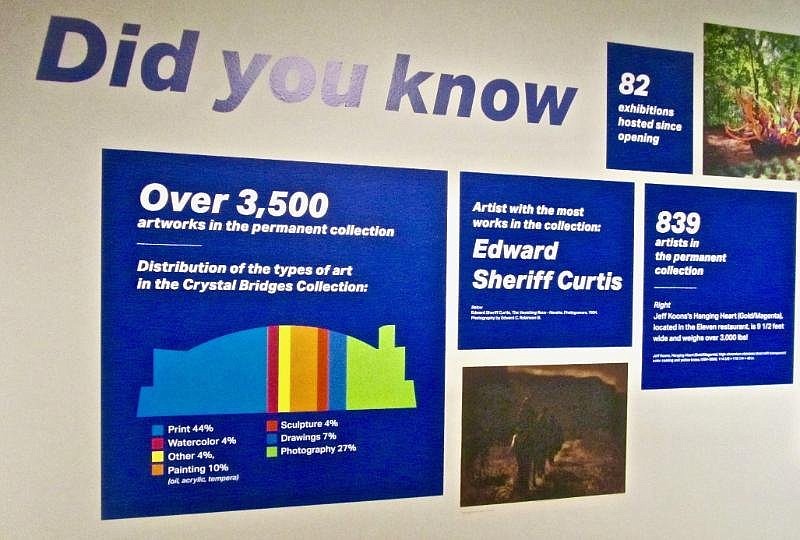 Some Crystal Bridges first-decade achievements are noted in a gallery alcove. (Special to the Democrat-Gazette/Marcia Schnedler)

BENTONVILLE — As 10th-anniversary celebrations continue, Crystal Bridges Museum of American Art has plenty of reasons to boast about its phenomenal successes. The museum's continuing evolution also shows that there is no inclination to rest on laurels.

If success is measured by popularity, a set of statistics posted in a gallery alcove makes a triumphal case. Since opening on Nov. 11, 2011, Crystal Bridges has hosted more than 6.5 million visitors from all 50 states and many foreign countries.

Those multi-millions have enjoyed free access to the permanent collection and the art-studded scenic trails, a boon made possible by multi-billionaire Alice Walton's largesse and that of other benefactors. Many temporary exhibits are also free of charge.

More posted facts burnish the luster. Crystal Bridges has hosted 82 temporary exhibitions during the decade. The most attended was the 2017 "Chihuly in the Gallery and in the Forest," which drew 126,000 visitors.

Some 839 artists are represented in the museum's permanent collection of more than 3,500 works. Forty percent of the objects are prints, 27% are photographs, 10% are paintings, 7% are drawings, 4% each are watercolors and sculptures. An enigmatic 4% are categorized as "other."

A visiting exhibition on display until Jan. 10 reflects the museum's ongoing efforts for cultural diversity, manifest in 2018 when Spanish joined English to make signs in galleries and elsewhere bilingual. 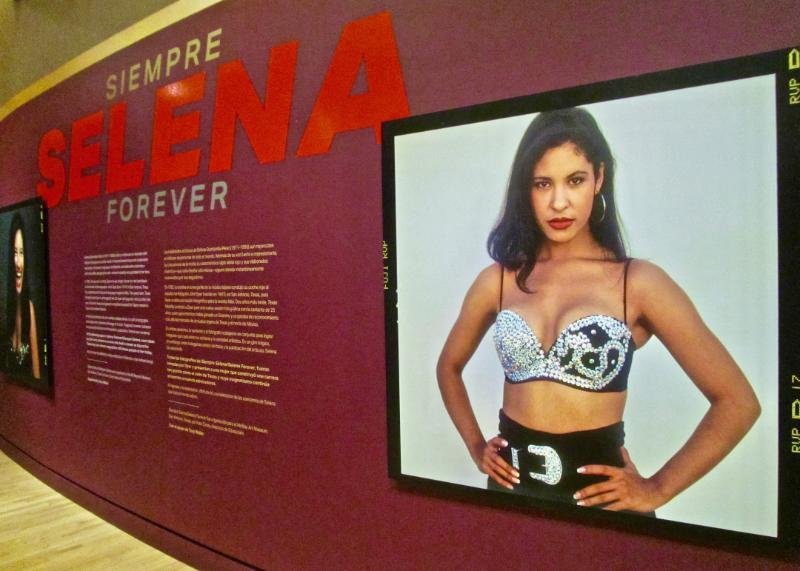 Selena is pictured at the entry to a visiting exhibit about her life and performing. (Special to the Democrat-Gazette/Marcia Schnedler)
Titled "Selena Forever/Siempre Selena," the show from The McNay in San Antonio features nine photographs of the late Tejano superstar taken in 1992 and 1994 by John Dyer. Selena Quintanilla-Perez was shot to death in 1995 a month before her 24th birthday by an estranged former friend and employee.

When "Selena Forever/Siempre Selena" opened several months ago at Crystal Bridges, curator Kate Carey from The McNay called the performer "one of those rare people who brings people together. I think about the experience of growing up multicultural, having a Texas identity, an American identity and a Mexican identity. And I also think about the fact that she was such a symbol for so many people of so many different generations."

The photos mainly show Selena in performing poses as she widened her popularity beyond Tejano audiences when her 1992 "Entre a Mi Mundo" album crossed over to the pop market. Her later "Amor Prohibido" remains one of the bestselling Latin albums in the United States. Dyer's photos show her signature red lipstick, high-style bustiers and high-waisted pants.

A permanent gallery across from the Selena images illustrates the art arrangement of 2018 that replaced the mostly chronological previous setup. An iconic 1790s' portrait of George Washington by Charles Willson Peale is paired with a time-warping interloper — a glowing video piece created in 2013 by Susie J. Lee of "Johnny," a bearded oil-field worker sporting a knit cap.

The text of a bilingual explanatory panel asserts that "there is no single narrative of American art and history. Multiple perspectives, stories and experiences continually shape the nation's identity. As you walk through the galleries, consider the art from all angles. What was happening at the time the artist made the artwork? How does the art carry meaning today? Whose perspectives and stories are missing?"

Visitors who haven't been to Crystal Bridges and its Bentonville neighborhood in the last couple of years will notice other changes. The most visible is the Momentary, a 63,000-square-foot space for contemporary art that opened in February 2020 less than two miles from Crystal Bridges. 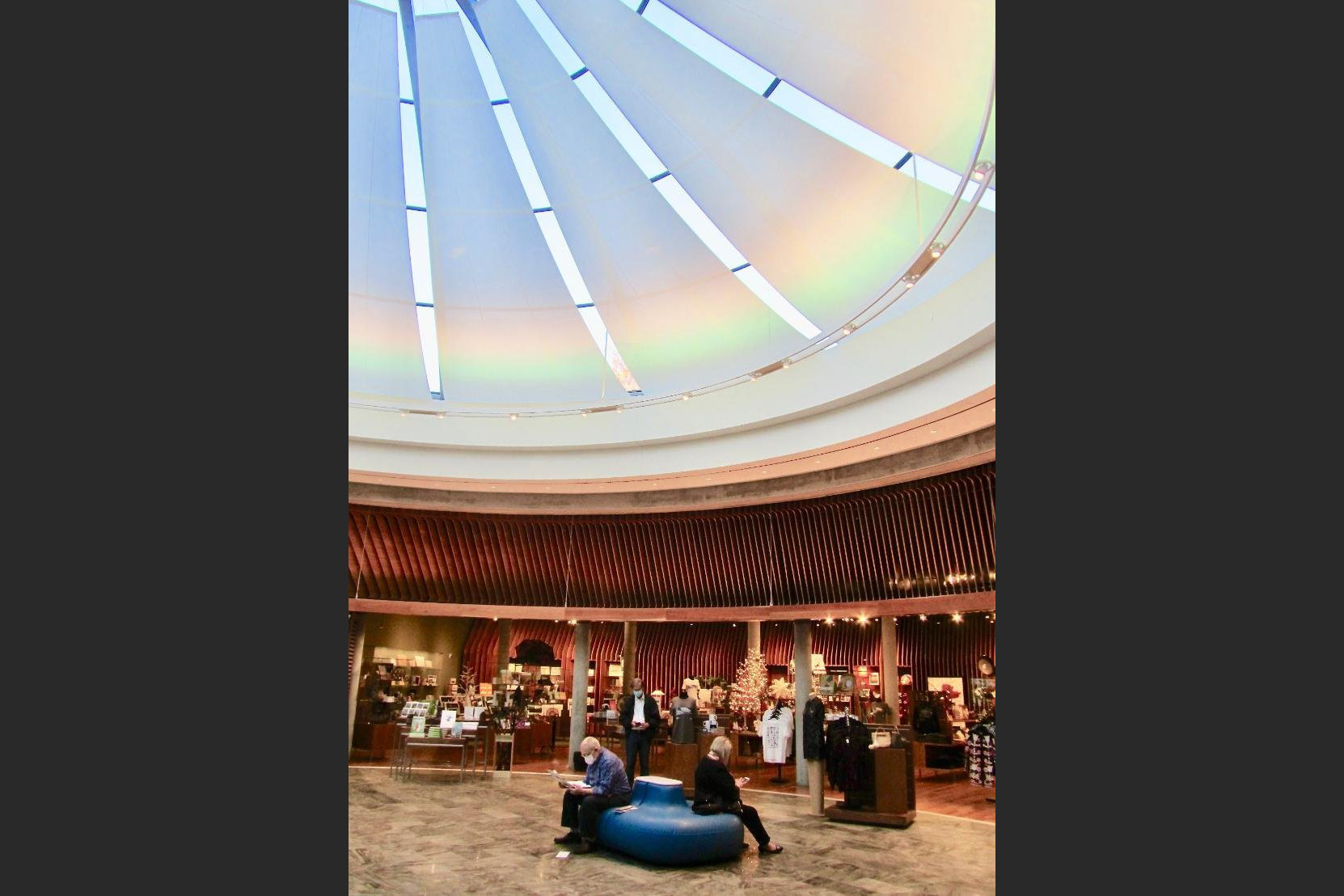 A dome installed earlier this year covers the entry foyer at Crystal Bridges. (Special to the Democrat-Gazette/Marcia Schnedler)
At Crystal Bridges itself, a reconfigured main lobby and courtyard were unveiled this spring, with a domed roof to shelter visitors on inclement days. Expansion aimed for completion in 2024 will add 100,000 square feet to the museum's gallery space, an increase of 65%.

Crystal Bridges and the adjoining children's Amazeum are collaborating to build Convergence, a 300,000-square-foot play area with a six-story parking deck. It will be located on four acres on the southeast side of Crystal Bridges' property and the western edge of Amazeum's land.

Meanwhile, Crystal Bridges' cavalcade of special exhibitions continues. Along with "Selena Forever/Simpre Selena," this month's visitors can view "Cross Pollination: Heade, Cole, Church and Our Contemporary Moment," on display for free until March 21. There is an admission charge for the larger "In American Waters: The Sea in American Painting," which closes Jan. 31.

The popular holiday show "North Forest Lights" is back for a third season through Jan. 2. It is open Wednesdays through Sundays, except for Dec. 24. The museum describes the attraction as "an immersive nighttime walk through the woods featuring dynamic, nature-inspired lighting elements, and soundscapes. Five distinct installations will bring the soul of the forest to life with light, sound, and sensory effects."

"North Forest Lights" tickets are $22 for adults, $10 for youngsters 7 to 18, free for kids 6 and under. Members get a discount. Advance reservations are highly recommended. Walk-up purchase of tickets costs $5 extra.