Athletes go, but no officials by Compiled Democrat-Gazette Staff From Wire Reports | December 7, 2021 at 7:02 a.m. 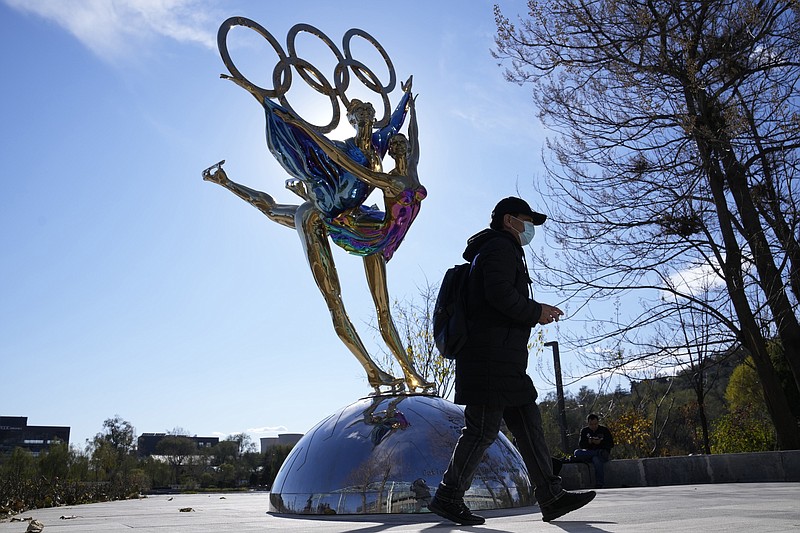 A visitor to the Shougang Park walks past the a sculpture for the Beijing Winter Olympics in Beijing, China, Tuesday, Nov. 9, 2021. China on Monday, Dec. 6, 2021, threatened to take &quot;firm countermeasures&quot; if the U.S. proceeds with a diplomatic boycott of February's Beijing Winter Olympic Games. (AP Photo/Ng Han Guan)

WASHINGTON -- The Biden administration will not send any American government officials to the 2022 Winter Olympics in Beijing, making official a diplomatic boycott to pressure China over human-rights abuses -- a move that China has vowed to greet with "firm countermeasures."

Jen Psaki, the White House press secretary, said that although American athletes would be able to compete in the Winter Games, there would be no delegation of American officials.

"U.S. diplomatic or official representation would treat these games as business as usual in the face of ... egregious human-rights abuses and atrocities in Xinjiang, and we simply can't do that," she said.

She said U.S. athletes will compete and will "have our full support," but "we will not be contributing to the fanfare of the games."

The dispatching of high-level delegations to the Olympics has long been a tradition among the U.S. and other leading nations, showing support both for the athletes and the host. Then-President George W. Bush attended the opening of the 2008 Beijing Olympic Summer Games. First lady Jill Biden led the American contingent to the Summer Olympics in Tokyo this year, and second gentleman Doug Emhoff led a delegation to the Paralympic Games.

However, "We have a fundamental commitment to promoting human rights. And we feel strongly in our position and we will continue to take actions to advance human rights in China and beyond," Psaki said.

She said the boycott was a response to human-rights abuses in Xinjiang, and human-rights advocates and U.S. lawmakers in the U.S. who support a boycott say it is a necessary step, saying China is using the games to whitewash its ill treatment of civil-rights activists, political dissidents and ethnic minorities.

"We feel this sends a clear message," Psaki later added.

The announcement comes weeks after President Joe Biden said the administration was considering a diplomatic boycott of the Winter Games in February.

[Video not showing up above? Click here to watch » arkansasonline.com/127olympics/]

The boycott has been described by some congressional critics of China as a way to hold Beijing accountable while not punishing American Olympians.

More hawkish members of Congress, including Sen. Tom Cotton, R-Ark., have called for a total boycott of the Beijing Games.

Cotton issued a statement Monday saying Biden "has once again opted for a half measure, when bold leadership was required."

He added, "American businesses should not financially support the Chinese Communist Party and we must not expose Team USA to the dangers of a repugnant authoritarian regime," alluding to a previous statement that the White House has no plan to protect the athletes from surveillance.

Regarding a total boycott, Psaki said, "I don't think we felt it was the right step to penalize athletes who have been training, preparing for this moment."

Biden had raised the possibility of not sending the U.S. delegation days after a virtual meeting with China's leader, Xi Jinping, that was meant to calm boiling tensions between the two nations.

Both Democrats and Republicans in Congress, as well as human-rights advocates, have called on the White House to use the Winter Games to pressure Beijing over abuses against the Uyghur community and a crackdown on free speech in Hong Kong.

The boycott calls have only intensified after the disappearance from public life of tennis star Peng Shuai, who accused a top Communist Party leader of sexual assault.

"This boycott is a necessary step to demonstrate our unwavering commitment to human rights in the face of the Chinese government's unconscionable abuses," Menendez said, adding that he hoped other nations would join the United States.

China's foreign ministry spokesperson, Zhao Lijan, told reporters at a daily briefing that such a move would be an "outright political provocation," but gave no details on how China might retaliate.

"Without being invited, American politicians keep hyping the so-called diplomatic boycott of the Beijing Winter Olympics, which is purely wishful thinking and grandstanding," Zhao said. "If the U.S. side is bent on going its own way, China will take firm countermeasures."

It appears the administration will move forward without allies, at least for now. European nations are under pressure but have not made a decision. Australia, whose ties with China have nosedived over a range of disputes, has raised the possibility of a diplomatic boycott.

Secretary of State Antony Blinken told The New York Times last month that the United States was discussing with allies "how they're thinking about participation" in the Olympics. He called it "an active conversation."

The U.S. Olympic and Paralympic Committee previously said it did not support a boycott preventing American athletes from competing in Beijing.

The announcement of the boycott also comes before Biden's virtual global democracy summit this week, an effort to take a public stand against authoritarianism and corruption. China was not among the more than 100 countries invited.

The administration has said Biden intends to use the White House Summit for Democracy "to announce both individual and collective commitments, reforms, and initiatives to defend democracy and human rights at home and abroad."

Information for this article was contributed by Zolan Kanno-Youngs of The New York Times; by Aamer Madhani of The Associated Press; and by Ryan Tarinelli of the Arkansas Democrat-Gazette.