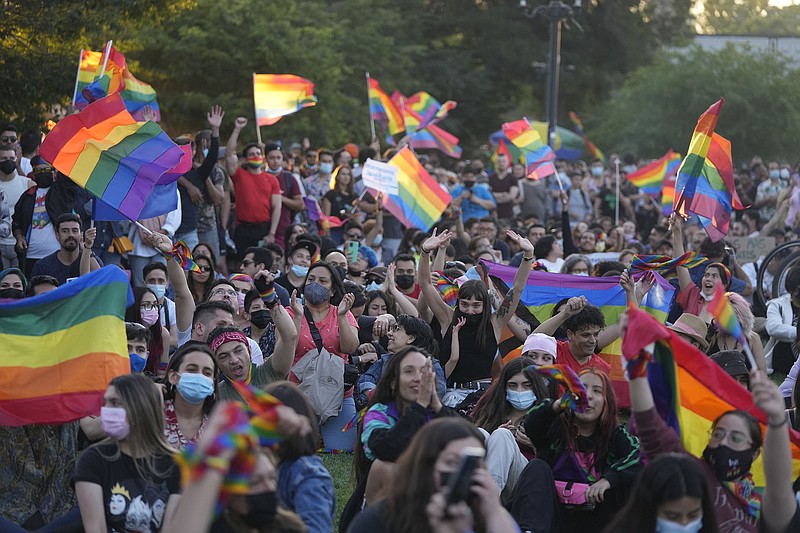 SANTIAGO, Chile -- Lawmakers in Chile on Tuesday legalized same-sex marriage, a landmark victory for gay-rights activists that underscores how profoundly the country's politics and society have shifted in the past decade.

By overwhelming majorities in both chambers, lawmakers put the unions of same-sex couples on par with others, making Chile the 31st nation to allow same-sex marriage and taking a significant step toward consolidating it as the norm in Latin America.

President Sebastian Pinera, a longtime opponent of same-sex marriage, startled the political establishment in June by coming out in favor of such unions. He urged Congress to prioritize passing a bill that had languished for years, ensuring the legislation will be among the last achievements of a turbulent presidency.

The measure will be signed into law at the final stretch of Chile's presidential race, in which the leading candidates are bitterly at odds on a vast array of issues, including same-sex marriage.

While the movement for same-sex marriage has advanced slowly in much of the world in recent years, the vast majority of Latin Americans now live in countries where those unions are legal.

The fight to extend the right to marriage to same-sex couples in Chile began in September 2010, when Cesar Peralta and Hans Arias, a couple who were raising two children, walked into a government office in Santiago and asked to be married, knowing full well their request would be denied.

"The officer of the civil registry informed us that, according to the law, marriage in Chile is only between a man and a woman," Peralta said.

The couple left the building to address the reporters who had been convened by Movilh, a leading gay rights organization in Chile.

It was the first salvo of a legal battle that unfolded for more than a decade before judges at home and abroad.

Gay activists in Chile set it in motion at the dawn of the global movement to extend marriage to same-sex couples, well aware of the odds they faced.

Gay rights activists in Latin America had been emboldened by Argentina, which became the first nation in the region to legalize same-sex marriage with a congressional vote in July 2010. Neighboring Chile, which was more politically conservative, was far from ready to follow suit. A law outlawing sodomy was repealed only in 1999, and divorce became legal in 2004.

By 2010, some Chilean lawmakers had begun proposing a civil union law for unmarried couples, but few leading politicians publicly favored broadening the definition of marriage or granting same-sex couples the right to adopt children.

Realizing it had little legislative support, Movilh took the case to the appeals court in late 2010, calling the denial of a marriage license for Peralta and Arias a violation of their constitutional rights. The case went to the Supreme Court, which in April 2012 ruled against the plaintiffs.

That ruling paved the way for Movilh to sue Chile in 2012 before the Inter-American Commission on Human Rights.

As the case was being litigated, Chile passed a civil unions law in 2015 that granted same-sex couples rights on issues including inheritance and access to health insurance. But gay rights groups argued that same-sex couples were still deprived of crucial rights, including the ability to adopt.

After years of negotiations, the commission and Chile in June 2016 reached a settlement that called on the Chilean government to set in motion a process to legalize same-sex marriage.

In 2017, the president at the time, Michelle Bachelet -- a center-left politician who had previously argued otherwise -- introduced a same-sex marriage bill as her time in office was coming to a close.

"Old prejudices cannot be stronger than love," she said.

The limited momentum the bill had fizzled as Pinera took office. In October 2019, halfway through his term, Chile was rattled by months of demonstrations over inequality, the cost of living and social rights. As the moment of reckoning showed, "The political class had been deaf, blind and mute regarding a series of matters on which civil society and ordinary Chileans had advanced," said Rolando Jimenez, one of the leaders of Movilh.